At ‘Kick Back,’ plenty of fun but deeper bonds, too 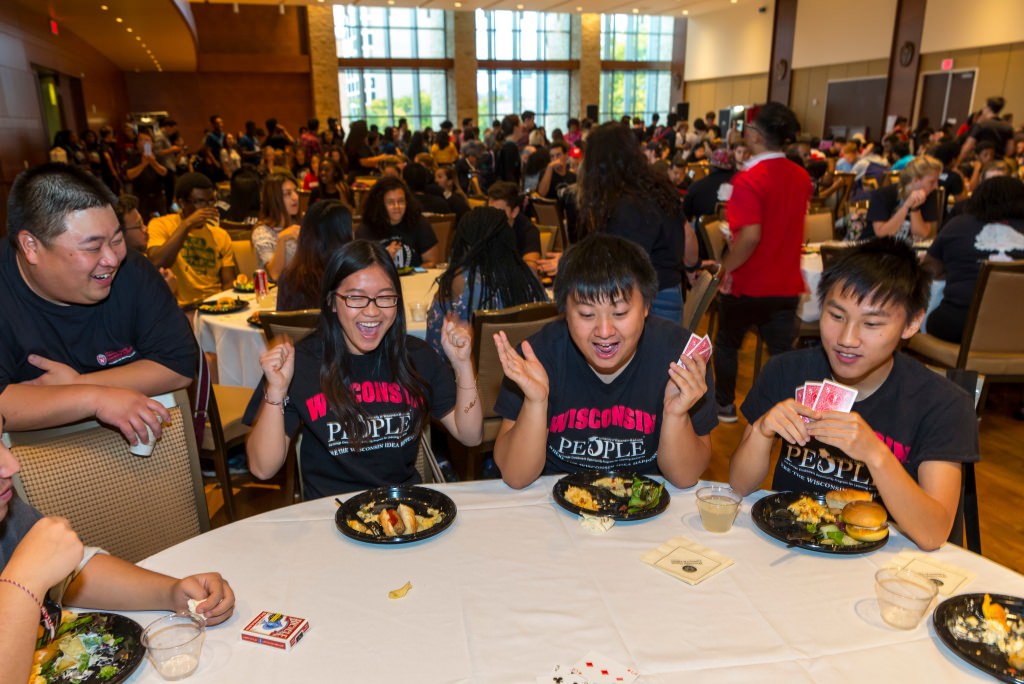 Miona Short surveyed the crowd at Varsity Hall in Union South Monday and pronounced it beautiful — nearly 800 students, all eating, laughing, playing games and making a lot of noise.

“Whenever you have a space where people are comfortable, where they have a sense of belonging, where they feel they’re part of a community, that’s beautiful, always,” said Short, a senior from Chicago majoring in astrophysics and Spanish literature.

The event, a welcome celebration called “Kick Back,” brought together students and staff from all the scholarship and non-scholarship diversity programs and units under the umbrella of the Division of Diversity, Equity & Educational Achievement.

All the programs seek to recruit and retain students of diverse talents, interests and abilities, especially those from traditionally underrepresented groups. 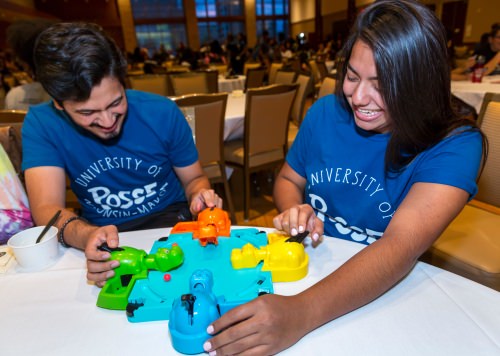 Syed Bukhari, and Kiana Gomez play a game of Hungry Hungry Hippos at the DDEEA Kick Back event. Andy Manis

One goal of Monday’s event was just to have fun — to literally kick back and get acquainted or reacquainted. On a deeper level, staff members hoped students would build interpersonal connections across programs to broaden their emotional and social bases of support.

Vice Provost Patrick Sims, the division’s director and the university’s chief diversity officer, characterized the power of the event as one of critical mass.

“Being a student of color on campus can sometimes feel isolating,” he said. “I want students to see there are other students here, affiliated with division programs, who are as talented and brilliant as they are, and that they are part of a larger community.”

Vanesa Meneses, a sophomore from Middleton, Wisconsin, said she recognized faces at Monday’s event from some of her classes but hadn’t realized until then that those students also are involved in programs in the division.

“Looking around at other tables, people were definitely bonding,” said Meneses, a psychology and neurobiology major and a scholar in the Powers-Knapp Scholarship Program.

Student input drove most of the planning decisions for the event, from the free food (jerk chicken sliders, macaroni and cheese, Babcock Hall ice cream) to the music (DJ Glauber Alvarez). There were two photo booths, a giant bowling alley with inflatable pins, and games on every table.

“This is definitely not adult space,” said Short, a member of UW–Madison’s First Wave Hip Hop and Urban Arts Learning Community. She emceed the event along with Kenneth Cole, a senior from Los Angeles and a scholar in the POSSE program. 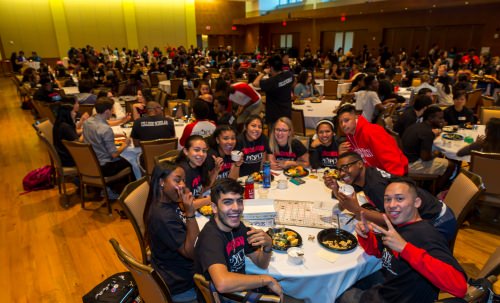 “Kick Back,” brought together students and staff from all the diversity programs and units under the umbrella of the Division of Diversity, Equity & Educational Achievement. Andy Manis

“I feel a really positive vibe here tonight,” said Cole, a sociology and legal studies major. “I hope it carries with us as we walk around this campus spreading our multicultural Badgerism.”

Mentoring of younger students by older students is baked into the division’s programs, and it happens in both structured and informal ways. Monday night, seven upperclassmen imparted advice during a brief program, touching on everything from the value of pursuing internships to the importance of getting enough sleep.

Garrett Pauli, a senior sociology major from Phoenix and a First Wave scholar, encouraged his fellow students to create what he called an “accountability network” — multiple people to “spread those emotional pieces around” when you need help or advice. In an interview later, he said alumni of the First Wave program are so good at mentoring that “I could go into almost any major city and have a place to lay my head.”

Three students — Camille Robert, Maria Hill and Mikayla Buford, all scholars in the Chancellor’s Scholarship Program — left the event praising the organizers for the opportunity to see so many of their fellow students of color in one place.

“They really outdid themselves in creating a good atmosphere,” said Buford, a computer engineering student from the Chicago area.

The event coincided with the annual Faculty of Color Reception, also sponsored by the division and held in another part of Varsity Hall. The reception recognizes new and recently promoted faculty of color and provides an opportunity for networking.

As the faculty reception came to a close, the partition separating the two events came down and many faculty members joined the “Kick Back” celebration.