Despite a growing focus on vehicles that navigate autonomously, driverless “smart” transit still seems like the stuff of science fiction.

However, in Wisconsin, it may soon move closer to reality as University of Wisconsin–Madison engineers collaborate with City of Madison officials and local industry in hopes of making the futuristic idea a reality.

Researchers in the Traffic Operations and Safety (TOPS) Laboratory, housed in the Department of Civil and Environmental Engineering at UW–Madison, are lending their expertise to the city’s bid to win a $50 million award from the U.S. Department of Transportation and Vulcan Industries. Dubbed the Smart City Challenge, the award will go to one mid-sized American city to fund the creation of an integrated, smart transportation system fitting for the 21st century. 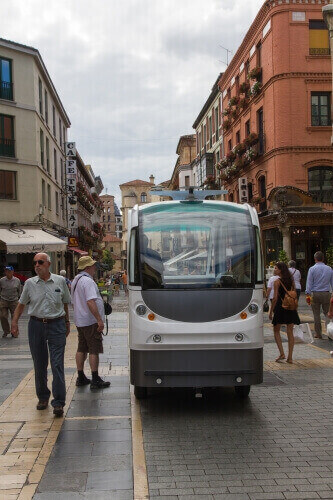 This driverless minibus being tested in Spain is similar to the type of vehicle researchers and city leaders envision eventually bringing to Madison through the Smart City Challenge. Photo © Sigur1|Dreamstime.com

But what exactly would a “smart” transportation system look like? That’s the challenge that Madison and more than 70 competing cities hope to answer, and one thing is for sure: Much of it won’t have a human face. The era of driverless cars, intelligent bicycles and self-operating buses is approaching.

“Connected and autonomous vehicles are a key part of it,” says Peter Rafferty, transportation systems management and operations manager at TOPS. Rafferty is heading up the lab’s assistance on Madison’s Smart City Challenge application, which is currently being considered by USDOT. Five finalist cities will be revealed on March 12, 2016 at the SXSW music and technology festival in Austin, Texas. The five finalists will each get $100,000 and two months to flesh out their plans, and the winning city will be announced in the summer.

Madison’s proposal includes a vision of all sorts of new infrastructure to support things like connected vehicles — vehicles that can “speak” to each other and to traffic signals in real time — as well as autonomous, or driverless, vehicles and transit. Madison’s proposal envisions a host of environmental and social benefits accompanying these new technologies.

The basic idea is that vehicles and traffic signals that are able to communicate with each other would lead to fewer accidents and reduced congestion, which would mean shorter commutes, fewer exhaust emissions and more time for people. Beginning in 2020, cars sold in the U.S. will be required to have such technology installed in them, and Madison wants to seize the moment by offering a robust, integrated infrastructure that communicates with the vehicles. 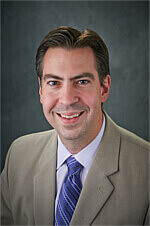 “We plan to capitalize on our existing extensive fiber communication infrastructure and build a new open system for all to fuel innovation and entrepreneurship, and to share the economy,” says Yang Tao, city of Madison assistant city traffic engineer.

At the core of Madison’s proposal is the creation of an open-source software platform that would collect and make sense of the city’s traffic data. The software would help Madison improve its transit system and transportation infrastructure, and would also be available to other public entities and private companies.

“The hope is not that just Madison gets better, but that Madison develops systems that can actually be used across the country in different cities,” says Jon Riehl, a transportation systems engineer in the TOPS lab.

The application also outlines a path to bring driverless vehicles and transit to Madison, which includes plans to partner with UW–Madison itself, plus medical software giant Epic Systems, with its nearly 1,000-acre campus in Verona, for an autonomous transit pilot project.

“It’s the first mile-last mile problem,” says Riehl. “Getting to the bus is difficult for a lot of people who live a mile or more from a bus stop — assuming buses are reliable and offered at convenient times for these individuals.”

“The hope is not that just Madison gets better, but that Madison develops systems that can actually be used across the country in different cities.”

But as the TOPS engineers and the city wait for the five finalist cities to be announced, they recognize the stiff competition they face and the potential logistical challenges they must address to make their vision a possibility. Because USDOT defines “mid-sized” cities quite broadly — cities with populations of 200,000-850,000 — Madison is competing for funding against much larger cities like Austin, San Francisco, Minneapolis and Washington, D.C. Add to that Wisconsin law that doesn’t currently allow for completely autonomous vehicles on public roads.

But Rafferty and Riehl are optimistic. Epic’s commitment is key, as the state’s autonomous vehicle policy does not extend to private property. As the health care technology giant’s campus continues to grow, it provides a perfect test site for small driverless buses, Rafferty says.

Rafferty and Riehl also point out that Madison’s population density is what USDOT is ideally looking for in a city, and they believe they’ve put together a solid application. “This is a bold vision,” says Rafferty.