Deshawn McKinney, a University of Wisconsin–Madison senior majoring in English – Creative Writing, has been named a Rhodes finalist. Over the weekend, McKinney and other finalists traveled to Chicago for interviews followed by recipients of the prestigious scholarship being named.

Candidates are judged on a proven record of intellectual and academic achievement, integrity of character, interest in and respect for others, leadership ability, and the energy to fully utilize their talents. Last year, UW–Madison student Colin Higgins was named a recipient of the Rhodes Scholarship and fellow student Bill Mulligan was a finalist. 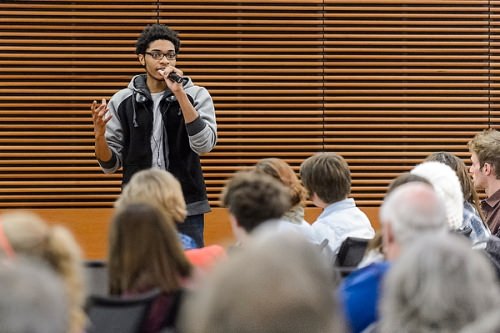 Being named a Rhodes finalist isn’t the first prestigious honor for McKinney. Last April, he won a Truman Scholarship, given by the Harry S. Truman Scholarship Foundation, which selects and supports the next generation of public service leaders. He also received the Richard Ralph Winter Phoenix Rising Humanitarian Scholarship, a service scholarship that rewards “humanitarian achievement and service, encourages excellence and commitment in the application of humanitarian ideals, and affirms the moral obligation to provide for human welfare.”

“Deshawn is an outstanding student and citizen, setting a great example academically as well as civically,” says Provost Sarah Mangelsdorf. “He cares deeply about his studies and about social justice. We are proud of his accomplishments at UW–Madison, and we know that he has many more accomplishments ahead of him.”