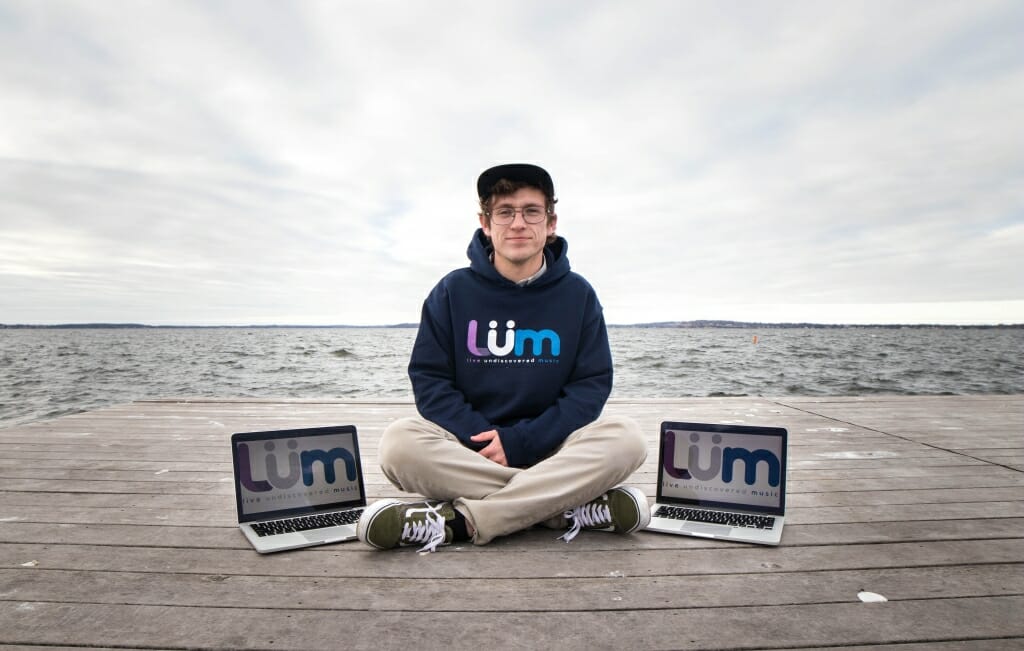 Max Fergus is CEO of LÜM, a Madison startup that has just launched a social-network app to raise the visibility of undiscovered musicians. Photo courtesy of LÜM

A UW–Madison startup called LÜM will launch an app designed to build support for unrecognized artists, at an event from 7:30 p.m. to midnight on Friday, August 17, at Monona Terrace.

With music delivery moving rapidly to streaming, CEO Max Fergus sees young unknown artists as caught in a bind. The playlists of major streaming services are dominated by established artists, who earn pay-per-listen royalties, but the other 90 percent of artists on Spotify or Pandora scarcely get streaming exposure, ensuring that they remain unknown and under-compensated on a medium that can make or break a career. 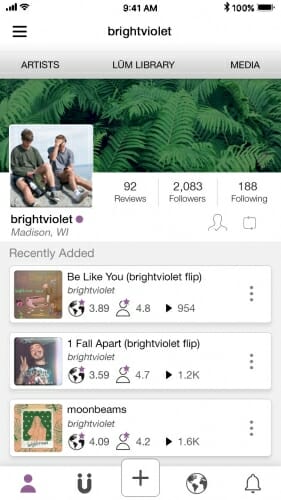 Each artist gets a profile page on the new app.

It’s a Catch-22 situation, says Fergus, a Stoughton native who graduated from UW–Madison in June. You can’t get on the big streaming services unless you are popular, but you can’t become popular unless you are heard on streaming. He thinks listeners are ready for a change, however. “Younger millennials don’t necessarily want to be told what music to listen to. There are legions of music lovers who want to discover music and share it with their friends, but that cannot happen on current streaming platforms. Each music lover wants the ability to find the next big artist, the next big song.”

Four days before launch, LÜM already had more than 1,000 users. And on Thursday LÜM won the Pressure Chamber Award at the Forward Festival in Madison, giving the company a trip to Silicon Valley to pitch to investors.

LÜM emerged from an effort by UW–Madison students and alumni to identify an industry that was growing rapidly but based on an antiquated business model, Fergus says.  “Streaming has been growing exponentially, but Spotify and Pandora were not doing well financially, and we wondered how to fix the financial problems and at the same time, address the limits on promotion faced by emerging artists.”

LÜM’s app is free to users. The company expects to earn money through in-app sales, using a “token” system and an approach called gamification. As users increase their engagement with LÜM by, for example, recruiting friends to join, they are rewarded with tokens that they can use to raise the visibility of a favorite artist. But they can also buy tokens for the same purpose.

“It’s a way for fans to help an artist circulate their music,” Fergus says. “We can make the platform free for the artist and fan, because we are able do other things that people are not used to see on streaming sites.”

Although artists are not paid by LÜM, they are rewarded by the possibility of building their audience, Fergus adds. “By creating the right user experience, and by being supportive of younger emerging artists, we help them to grow their fan base so they can get better involved with live entertainment venues and record companies.”

Once LÜM builds a substantial user base, “we will be able to collect data that will be valuable to partners that want to know what’s hot, and we’ve already been contacted by radio stations,” Fergus says. Eventually, with help of usage stats, successful artists may “graduate” to the big streaming services and earn incomes that are the stuff of dreams today.

While LÜM will enable sharing, streaming, and music discovery across the nation, the local focus may be more helpful to musicians, Fergus says. “I can make connections with people around me, and this local element will help grow a local artist’s fan base,” Fergus says. That can help in live bookings, representation, and getting picked up by a record label.

UW-Madison has been crucial to the business, Fergus says. “You need a lot of support to make something like this happen. The Bolz Center for Arts Administration and Dan Olszewski, both at the Wisconsin School of Business, have been phenomenally helpful. The Wisconsin Alumni Students Board and the Wisconsin Union Directorate have helped us get where we are today. Even though more than half of our founders have graduated, we intend to remain involved with the university. It turns out that Madison is the perfect place for a startup like LÜM.”