Forced to choose between staying away from others to prevent the spread of a pandemic and casting a ballot in Wisconsin’s April 7 election, crowds lined up at polling places across the state — including thousands funneled to five sites in Milwaukee.

New data shows that Wisconsinites traveled more during Tuesday’s election than they did on the days leading up to the statewide vote, according to University of Wisconsin–Madison researchers who are tracking the mobility of Americans increasingly urged to stay still. 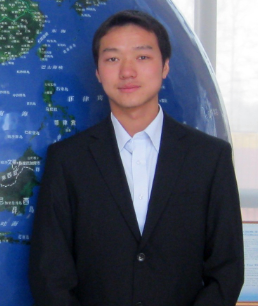 “We did see an increase of median mobility, in travel distance, from 1.1 kilometers on Monday to 1.9 km on Tuesday in Waukesha County, and longer-distance travels in Lafayette County (from to 2.7 km April 6 to 4.5 km April 7) and Rock County (2 km to 2.66 km),” says UW–Madison geography professor Song Gao.

In a moment defined by movement, mapping human mobility can give public health agencies and researchers a window into the future of the coronavirus pandemic. This research also offers a way to gauge whether people are responding to orders designed to keep them from interacting and speeding transmission of the virus responsible for COVID-19.

A group of UW–Madison researchers, led by Gao, is turning new sources of information on the movement of Americans around their own neighborhoods and across the country into maps, models and messages that may help save lives.

With anonymized data pooled from hundreds of thousands of cell phones, Gao’s Geospatial Data Science Lab is mapping day-to-day shifts in how far people travel from a national level down to states, counties and individual census districts. And they’re making the mapping tool available on their lab website.

“We can take snapshots of the spatial and temporal changes, for a specific county — how the maximum travel distance of those mobile phone users has reduced or increased in the last four weeks,” says Gao, whose work is supported by a new National Science Foundation Rapid Response Research grant.

The travel distance figures likely show how well the public is adhering to guidelines like Wisconsin’s “Safer at Home” order and limiting their outings to avoid spreading or contracting the novel coronavirus.

“We don’t have the ability to follow individuals. There are good differential privacy and civil rights arguments against that,” Gao says. “Instead, we have proxies, anonymized and aggregated data on travel distances and place visits from a company, SafeGraph, we’ve been partners with for about a year. With the proxies, we can say, OK, in which county or which city are more citizens following the stay-at-home policies. And that can reduce the transmission rate.”

In Dane County, home to the state capital Madison, the median travel distance dropped to nearly 0 kilometers on half a dozen days during the last two weeks. That is, half of the more than 6,000 cell phones sampled on a daily basis were moving less than 0.1 kilometers. Earlier in March, before Gov. Tony Evers ordered limits on businesses and personal travel, the median was often higher than 6 kilometers.

Measuring the impact of rules like Wisconsin’s is a particular focus of the researchers’ analysis.

“I’m very interested in to see and to quantify such changes,” says Gao. “We could see some of the spatial heterogeneity that existed — such as in Florida where some local governments had policies before there was a state-wide policy — and whether there was more homogeneity after a state-wide policy. The way behavior changes as orders and messages change tells us what was successful.”

The UW–Madison group acted early to find ways to inform and study the pandemic response.

“I’m originally from China,” Gao says. “So, when the outbreak began I was already very concerned as a scholar and researcher, as well as for my family and friends overseas. I really hoped we could contribute something by utilizing our knowledge, and we have been working with our university’s American Family Data Science Institute and Global Health Institute to have a special, interdisciplinary team from different parts of the campus, and also collaborating with the Wisconsin Department of Health Services.” 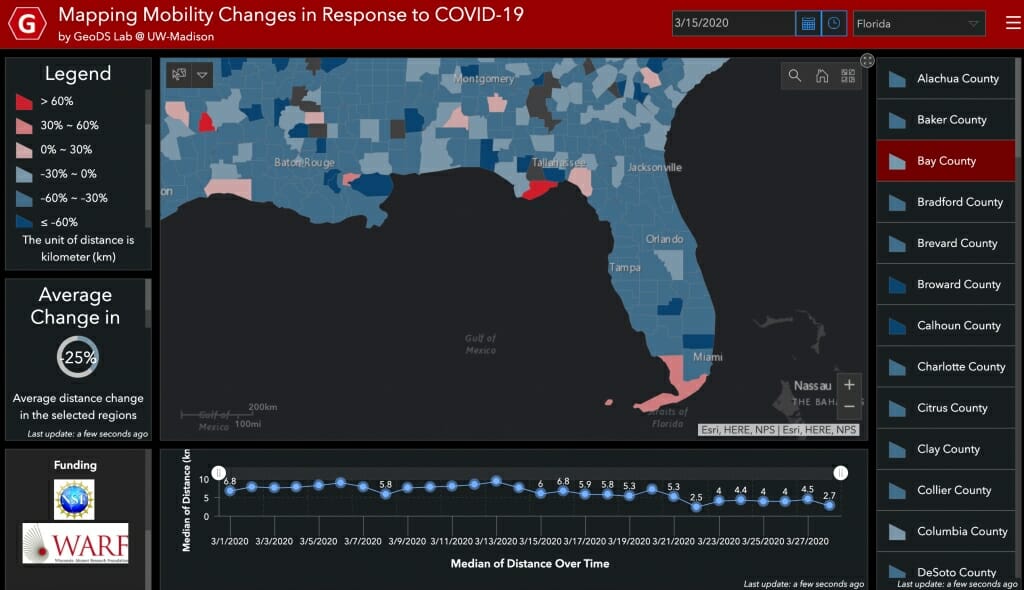 County-by-county data on travel by Americans in Sotheastern states shows variations attributable to a patchwork of local differences in business closures and stay-at-home orders. UW–Madison researchers assembling the data are interested in effects of differing guidelines and public health messaging on travel. Image courtesy of Song Gao

Li will use the team’s data to inform mathematical models of the spread of COVID-19. Chen’s specialties are science communication and computational methods, and Patz is part of a group on campus whose goal is to create and test messages local agencies could use to persuade people to follow public health policies.

The research group will use survey panels and social media messages as data to track the flow of both information and infections.

“We will focus on Twitter, where COVID-19 has been extensively discussed,” Gao says. “We have been collecting tweets from January to present with COVID-19 hashtags.”

After classifying the accounts who make the posts — government agencies, NGOs, or individuals — and measuring the posters’ COVID-19 risk perception and preparedness, the researchers can pair the communications data with mapping and movement data to get a more complete look at how people have reacted to the viral threat.

“We want people to take action to further prevent or mitigate the threat of the virus,” Gao says. “Our development of a COVID-19 spread model will be community-centered, which incorporates community responses into both the model development and the model interpretation process.”