Victor Brar is making new light sources the old-fashioned way, and he’s been rewarded for his work with a prestigious award.

The University of Wisconsin–Madison physics professor has developed a light source to fill a niche where lasers are too expensive and LEDs inefficient, and the Gordon and Betty Moore Foundation has named him to its 2018 class of Moore Inventor Fellows. 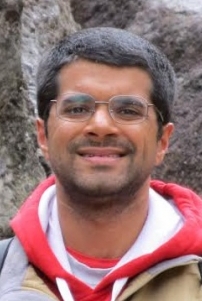 “I am really honored to become a Moore Inventor Fellow,” says Brar. “My plan is to use this opportunity to create a new generation of incandescent light sources that could be useful for low-cost chemical sensors as well as high speed communication devices.”

Brar’s lab works on surfaces designed to control the way they reflect light. These “optical metasurfaces” could be used to create holographic displays and — when heated up — they can act like an incandescent light bulb.

“When most people think of incandescent light, they think of those filament-type lightbulbs, where you heat up a wire and it glows white-hot,” says Brar. “But if you cut little notches in the filament and make it out of really thin materials, you can make it radiate light at just a single wavelength, similar to a laser or LED.”

Single-wavelength light can be useful in chemical sensors, like carbon monoxide detectors. And the wavelengths produced in abundance by Brar’s materials can be tuned without the management of sensitive electronics required by lasers.

“What makes these light sources attractive is that they can be made really cheaply, and they can produce light at wavelengths where lasers and LEDs are inefficient and expensive,” says Brar, who grew up in Middleton and joined the UW–Madison faculty in 2016.

Brar figures cheap and generalized sensors employing his light sources could be used for environmental safety applications — detecting toxins — and to make industrial and agricultural processes more efficient by pointing out chemical loss or drift.

He is the second UW–Madison professor named a Moore Fellow, after electrical and computer engineering professor and Beloit native Dan Ludois was similarly honored in 2017 for a new type of electric motor.