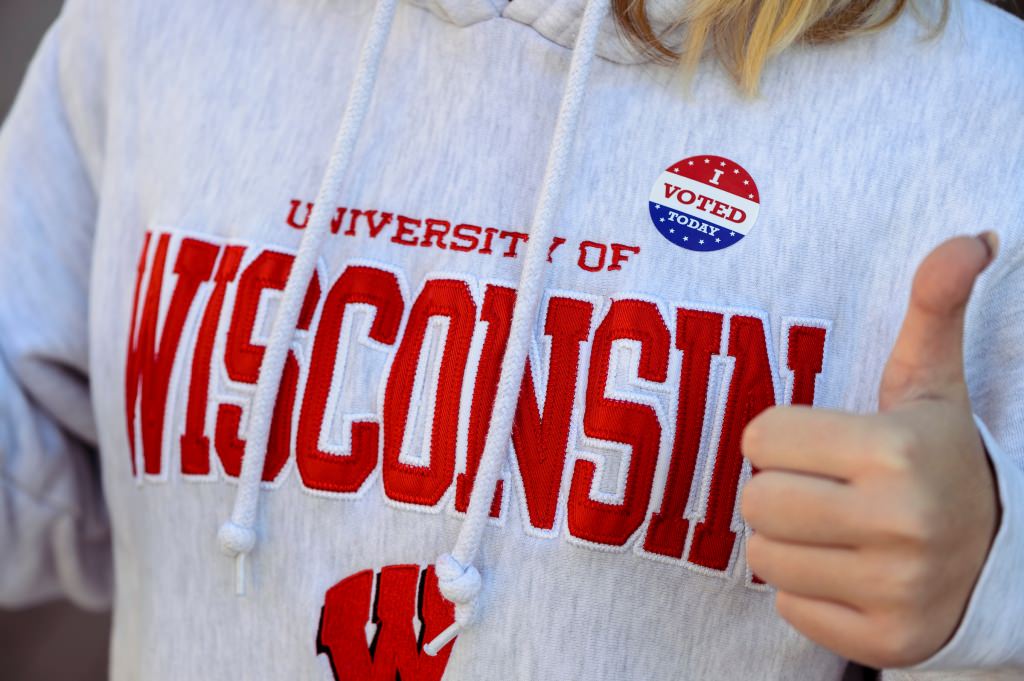 A student sports her “I voted today” sticker at a polling place in the Gordon Dining and Event Center in November 2016. Photo: Jeff Miller

UW-Madison is joining the other Big Ten institutions in a new competition to promote civic engagement: the Big Ten Voting Challenge.

Chancellor Rebecca M. Blank, along with her fellow Big Ten chancellors and presidents, announced the challenge in an email to students today. “One of the most important values we teach at our universities is the importance of civic engagement. Voting in elections gives our students a voice in the democratic process and in the decisions that affect local, state, and national issues,” the leaders wrote. The Big Ten Voting Challenge is a nonpartisan initiative to encourage students to exercise their right to vote.

Voter turnout for people under age 30 is historically low as compared with older segments of the population, especially in midterm elections. According to the Center for Information and Research on Civic Learning and Engagement at Tufts University, only 21 percent of those under 30 turned out to vote in 2014, compared with 36 percent overall. Turnout on university campuses across the country was even lower, at just 19 percent.

UW-Madison already has a strong record of successful student participation in elections thanks to partnerships between Associated Students of Madison, the Division of Student Life, the Morgridge Center for Public Service, University Housing, the Wisconsin Union and elections officials in the city of Madison and Dane County. Actions have included:

“Badger pride is alive and well in the realm of student engagement, and we are proud to help foster that strong tradition at UW–Madison,” says Kathy Cramer, faculty director at the Morgridge Center.

The Morgridge Center will lead UW–Madison’s participation in the Big Ten Voting Challenge, building on these efforts. Members of the campus community are invited to reach out to vote@morgridge.wisc.edu to learn more and get involved.