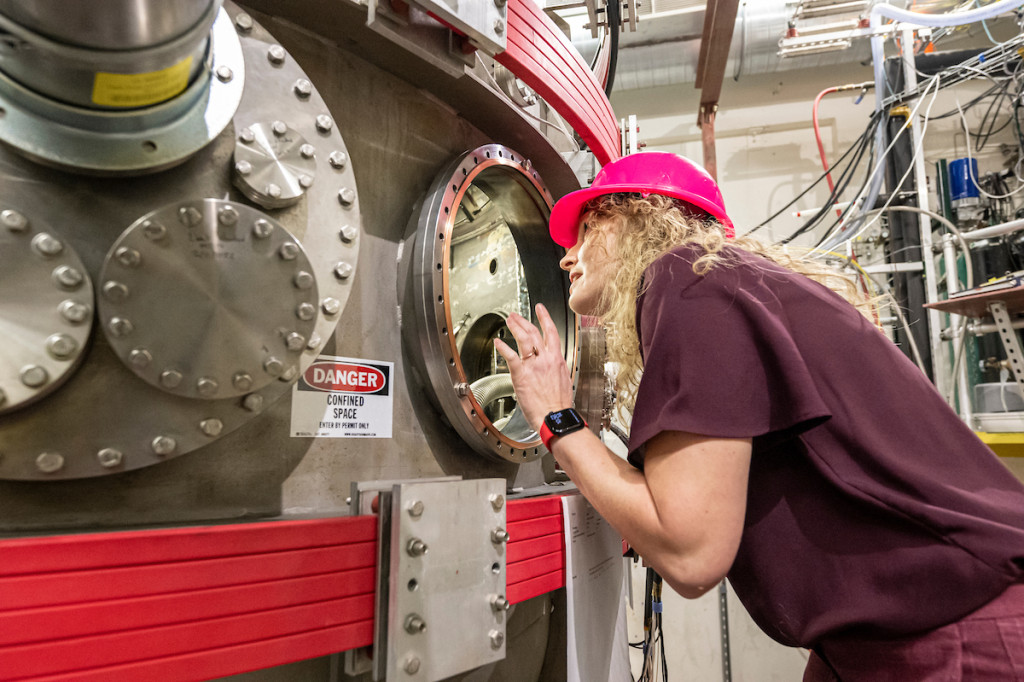 Steffi Diem, professor of engineering physics in the College of Engineering, checks out the Pegasus-III Lab in the Engineering Research Building. Photo: Bryce Richter

On Tuesday, U.S. Department of Energy scientists announced a crucial advance in the quest to mimic the nuclear fusion that powers the Sun — a long-held goal of researchers seeking a clean, stable and essentially limitless energy source.

The breakthrough at the Lawrence Livermore National Laboratory’s National Ignition Facility is significant because it’s the first time scientists have been able to produce “ignition” — a nuclear fusion reaction that creates more energy than it consumes.

While the advance marks a potential turning point in fusion energy production, experts say it will take several more decades of research — at a minimum — before the technology is ready for widespread use. The December 2022 experiment that first produced ignition was itself a product of decades of investment in research on nuclear fusion and the plasma that powers it.

Over more than a half-century, the University of Wisconsin–Madison has become a national leader in the field, with dozens of researchers working on multiple large-scale projects across three departments and two colleges. While fusion and plasma experiments at UW–Madison differ from the effort at Livermore, they each contribute to the scientific understanding of nuclear fusion and plasma.

“This result is a real demonstration of how important scientific understanding is to making fusion generate net energy,” says Cary Forest, a UW–Madison physics professor and expert in experimental plasma physics for nuclear fusion. “A few years ago, many were ready to shut (the) National Ignition Facility down, but wiser heads prevailed and they went into a very careful study of how to make improvements. The payoff is huge.”

Forest is among a number of researchers across the departments of physics, engineering physics and electrical and computer engineering working on fusion and plasma research. In addition to furthering scientific knowledge of nuclear fusion, these experiments offer students hands-on experience in the design, construction and operation of complex facilities that could eventually help pave the way to a fusion-powered society. UW–Madison fusion and plasma work includes:

Additionally, UW–Madison researchers and alumni have applied their expertise in fusion technology to private sector startups, including Type One Energy, Shine Fusion and Realta Fusion.

Much of UW–Madison’s fusion research centers on magnetic confinement fusion — a different approach to fusion energy production from the one behind the Livermore announcement. Still, the experiments and modeling that led to the breakthrough at Livermore are progressing in the magnetic confinement field too, according to Stephanie Diem, a professor of engineering physics who leads the Pegasus-III Experiment.