Plenty of apps are born over a cup of joe or a glass of wine or beer. Here’s an idea brewed over a beer by a couple of geologists who were fiddling with Untappd, an app covering the who, what and where of microbrews.

As Shanan Peters, a professor of geoscience at the University of Wisconsin–Madison, and Patrick McLaughlin, formerly at the Wisconsin Geological and Natural History Survey, mulled it over, the kernel of a great idea emerged: Why not do the same thing for geology and open a two-way channel between experts and amateurs? 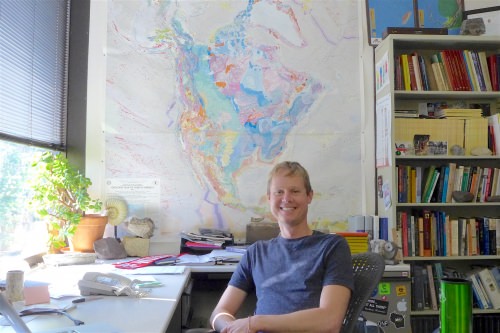 Shanan Peters, professor of geoscience, has tried to compress the complexities shown on a map of the geologic structure of North America into a free app called Rockd. Rockd taps into databases on geology and fossils, and offers users a chance to contribute to geologic knowledge. Photo: David Tenenbaum

“Here was this app that allows you to rate a beer and see what others think about it,” says Peters. “It was fun to use, because you can easily learn who made the beer, where it was brewed. The data were there, ready to be tapped when you wanted to.”

Rockd, the outcome of that musing, is now available free at the App Store and will be submitted to Google Play shortly. People can use it as a portable, GPS-powered field guide, but Peters hopes its interactive features will raise the sum of geologic knowledge. “The big idea is, ‘Tell us what you saw and I will tell you what I saw,'” Peters says. “Users can upload their observations and photos, and compare those to what others think or know about that location.”

With its GPS-driven accuracy, Rockd overcomes a key limitation on geologic maps: their focus on big structures. “Using a map, it can be hard to tell specifically where to go to see a particular rock unit exposed at the surface,” Peters says. 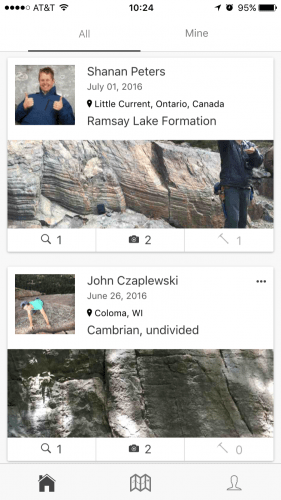 A Rockd screenshot shows two “examples” of user-inputted data, each recorded by one of the project’s masterminds. Courtesy of Rockd

Rockd serves both amateur rock lovers and professional geologists, he says. For amateurs, “the goal is to help people discover the natural history that is recorded all around them. People see rocks at highway cuts, and some may wonder what they are and when they formed. The answers to many of these questions exist in the databases that we tap into.”

The new app should also help students, Peters says, and may lead to learning innovations. “Making a map after you are dropped in the middle of nowhere is a foundational skill in geology, but we already have maps. They are not perfect and often need to be redone at a finer scale, but maybe we can leverage what we already know to greater effect.”

For working professionals, the app “puts maps in your hands in the field, and gives you a simple way to annotate them,” Peters says. “A geologic map is often a big sheet of paper that you attach by magnet to the side of the van, but it’s difficult to use that knowledge as you walk through the field. Now you can leave the paper map behind, dig into the digital data and record what you see right when you see it, and link it to existing knowledge.”

Rockd could also engender friendly competition, Peters says. “There’s an adage: the best geologist is the one who has seen the most rocks. It’s tongue-in-cheek, but now we can measure that.”

Peters has spearheaded several web-based interfaces to ease access to large geologic data sets in projects like Macrostrat, the Paleobiology Database. “The special sauce for Rockd,” he says, “is the rich data we draw on because we have instant access to data from thousands of digitized studies of geology and paleontology.” 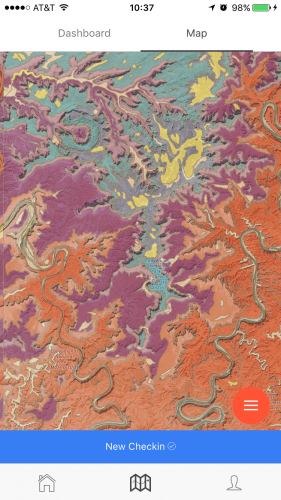 A river-dissected plateau near Moab, Utah, shown in Rockd. Colors show the age of rocks; two winding rivers cut deeply into the strata.

Uniquely, Rockd will also expand the sum of geologic knowledge, Peters says. “Data gathered through Rockd’s crowd-sourcing aspect can feed back into our data structure, so we end up with a richer database to do our analyses. It also can help us plan fieldtrips with students or for research.”

The app was written using software tools from Ionic, a UW–Madison spinoff that translates HTML and JavaScript into code for Android and Apple phones.

“I’m a map guy, with a background in political science and geographic information systems at UW–Madison,” says John Czaplewski, an information technologist in Peters’ lab who handled application development. “Ionic allows you to adapt technology from the web to build a mobile app. Instead of learning new programming languages, you write the code once and deploy across multiple platforms.”

This project was supported by grants from the National Science Foundation (EAR-1150082), the UW–Madison Department of Geoscience, and other sources.