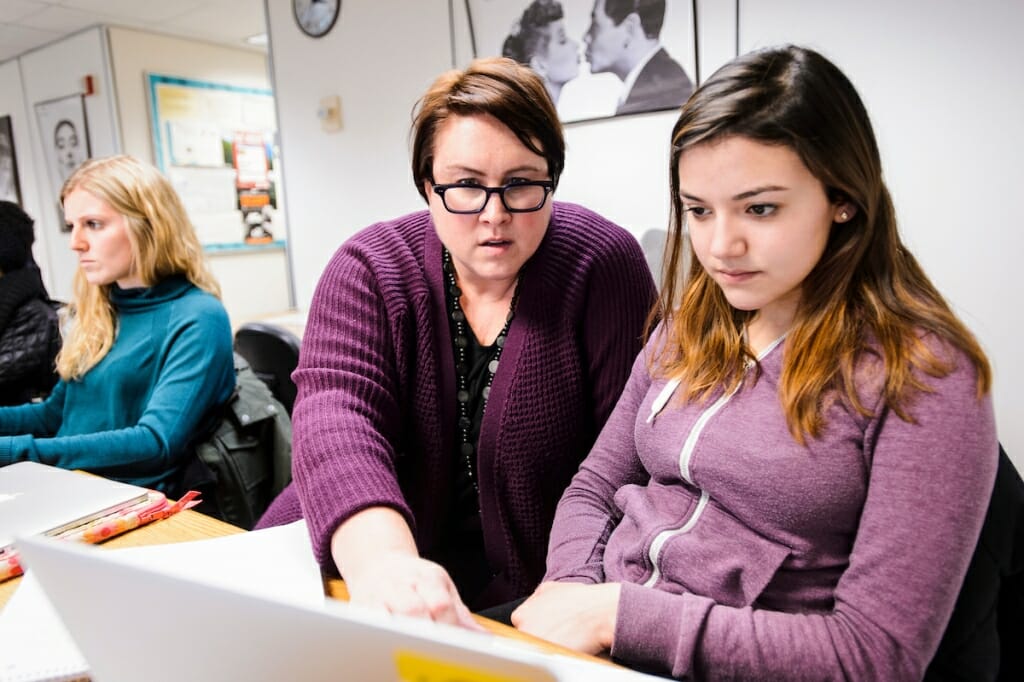 Ahna Skop, a University of Wisconsin–Madison genetics professor, artist and advocate for underrepresented students on the UW–Madison campus and beyond, has been selected as an IF/THEN Ambassador — an initiative to further women in science — by the American Association for the Advancement of Science.

AAAS and Lyda Hill Philanthropies have named 125 IF/THEN Ambassadors to inspire the next generation of women in science, technology, engineering and math.

“We firmly believe that if we support a woman in STEM, then she can change the world,” says Lyda Hill, founder of Lyda Hill Philanthropies. “The goal of IF/THEN is to shift the way our country and the world think about women in STEM, and this requires changing the narratives about women STEM professionals and improving their visibility.”

Skop, who earned her doctorate in cell and molecular biology at UW–Madison in 2000 and returned to campus as a member of the genetics faculty in 2004, studies the midbody, an elusive structure that assembles at the end of mitosis, a type of cell division.

“There are so many women doing amazing science,” Skop says. “I see them and their work all the time, but most people don’t. More importantly, young girls don’t see them. The picture in many people’s heads is an old, white male scientist in a lab coat with glasses. That limits the way they think about their future, and what we can accomplish as a society.”

In October, the ambassadors will participate in an IF/THEN summit on science communication and effective storytelling, helping to build a library of resources that media and educators can tap to help depict more real women and girls in STEM.

“This partnership enables us to reach more deeply into STEM education and help advance STEM careers for women and girls,” says Margaret Hamburg, chair of the AAAS Board of Directors. “It will help us to elevate the voices of women working in STEM fields and to inspire the next generation of girls and women in science.”

IF/THEN Ambassadors were selected — with the help of an advisory council of 150 girls and women ages 10 to 18 from around the country — based on their contributions to their STEM-related field, their skill in engaging people about science, and their commitment to inspiring middle-school girls to take an interest in STEM disciplines. The ambassadors receive a $5,000 award and opportunities to begin new outreach projects for international audiences.

Raised by a pair of artists and encouraged to embrace her own diverse ethnic background and the cultural differences in others, Skop received the American Society for Cell Biology’s first Prize for Excellence in Inclusivity in 2018. She used the monetary award from that honor (with further support from enthusiastic scientist donors) to start a fund that supports travel awards for underrepresented UW–Madison students to attend scientific conferences like meetings of the American Society for Cell Biology and SACNAS (the Society for Advancement of Chicanos/Hispanics and Native Americans in Science). The meetings often offer students their first opportunity to present their work to people from around the country and the world.

“It’s thrilling and confidence-building. It’s one thing to get underrepresented students active in research; it’s another to get them in a room with accomplished scientists who look like them, speak like them, eat their foods, and understand their cultural background,” Skop says of the SACNAS conference, in particular. “Most importantly, it gives them confidence to be part of a global network of scientists who are asking questions, posing hypotheses and answering big problems, which is huge. I’m really excited to continue to engage and encourage more young students into science. Because it’s totally fun!”