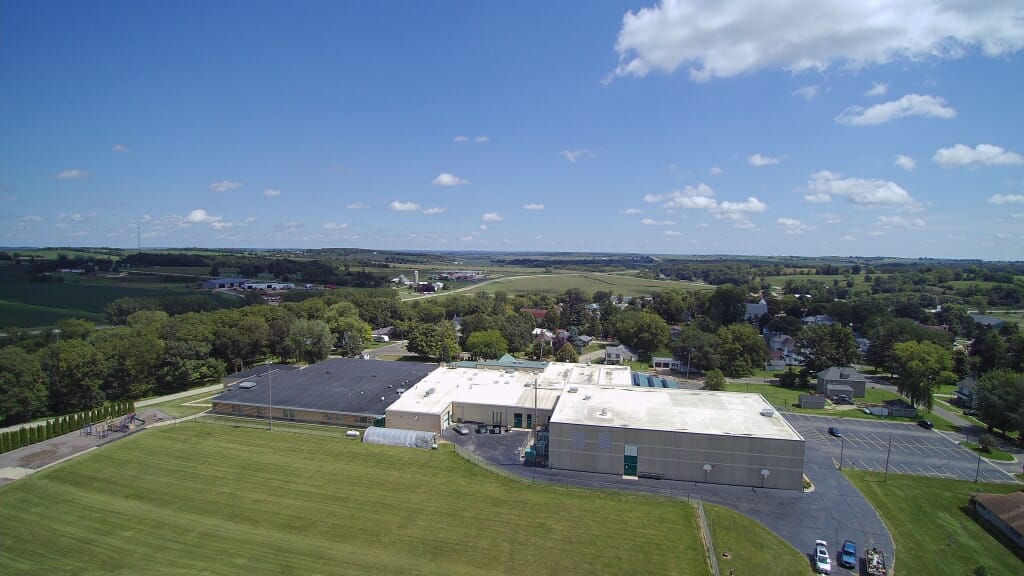 An aerial view of Juda School in rural Green County. The building houses all of the district’s students from 4K through high school. Photo courtesy Juda School District.

“If you want to know what the trick-or-treating hours are, you call the school,” says Scott Anderson, a high school math and engineering teacher at Juda School, a building that houses roughly 300 students from 4K to grade 12.

So any project touching the school is apt to attract interest in this community that sits 6 miles north of the Wisconsin-Illinois border, an enthusiasm that’s become apparent to a group of University of Wisconsin–Madison engineering students during the fall 2018 semester. 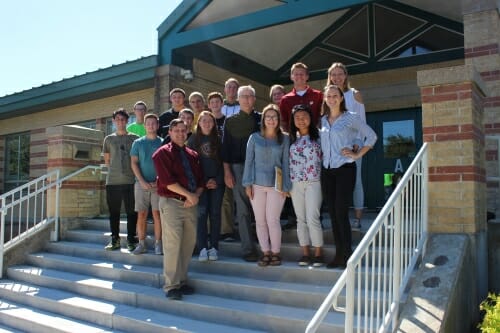 As part of UW–Madison’s UniverCity Year partnership with Green County, a team from the Department of Civil and Environmental Engineering’s senior capstone design course is proposing a renewable energy system to help offset Juda School’s energy expenses by 25 percent.

Community members watched the students’ preliminary presentation on YouTube. The Badger engineers also did a radio interview about the project with WKEZ in nearby Monroe.

Each semester, civil and environmental engineering students — along with some from the department’s geological engineering major — tackle projects for clients ranging from private companies to state agencies and other public entities. Adjunct faculty members and team mentors who are also practicing engineers lend advice on tactical elements like putting together proposals, delivering presentations, project management and estimating costs. Then it’s up to the students to deliver a detailed solution, giving them a taste of the kind of work they’ll face after graduation.

They’ve looked at systems used at schools across the state, as well as one in Laramie, Wyoming, and consulted with topic experts like their team mentor Casey Joyce, a project manager at solar energy contractor SunPeak, and James Tinjum, an associate professor in CEE and the Department of Engineering Professional Development, who has extensive experience with wind turbines.

All that research and analysis has pointed to a system that incorporates both a geothermal heating and cooling system and a rooftop solar panel array to bolster Juda School’s existing solar setup. The students are also exploring funding options that would help the school district pay for such a major upgrade.

“It’s given me confidence that I could go work on something that I’ve never really experienced before, and be able to learn it quickly,” says Ritchey.

Visits to Juda have also allowed the UW–Madison engineers to connect with the nine students in Anderson’s Intro to Engineering class. Anderson says the project has not only shown his students what engineers do on the job, but it’s allowed them to see a viable path from a high school of less than 100 students to a university with more than 40,000.

“It shows them the opportunities that are out there in the world,” Anderson says. “It’s a great motivator for my students.”

Of course, senior capstone design projects come with the caveat that they’re conceptual. A professional engineering firm would need to review the work and develop the detailed final design. But Anderson says he’s hopeful that within a few years, the school will start to install a system.

“It’s going to be ready to go. It’s been engineered. It’s been thought out. All the research is done,” he says. “And then when an opportunity appears, we’re going to be poised to jump on it.”

Two other engineering classes are also working with Anderson and his students on renewable energy efforts through the UniverCity Year program, which connects the university with community partners through a series of projects across academic disciplines.

Professor Andrea Hicks’ Environmental Sustainability Engineering class is comparing the environmental, economic and societal impacts of solar and wind energy systems at Juda School. Students in Interdisciplinary Design for Energy and Sustainability with Scott Williams, a faculty associate in the Department of Engineering Physics, are examining the school’s energy use and solar system to identify opportunities for improvement.