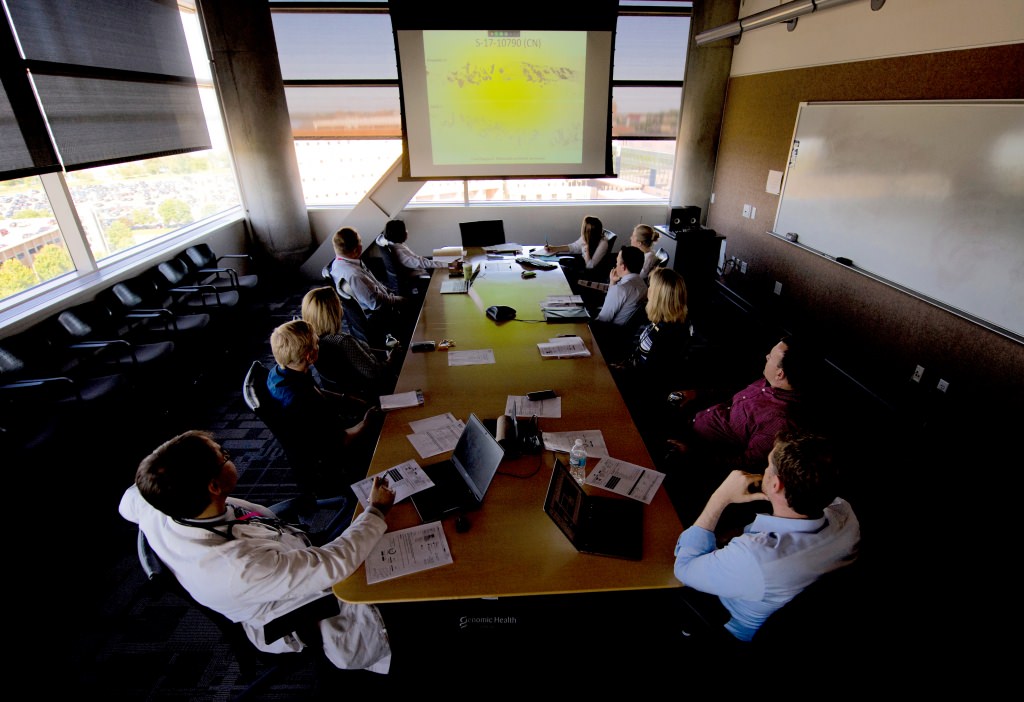 The Molecular Tumor Board, a mix of oncologists with varying specialties, pharmacists, pathologists, molecular geneticists and others, meets biweekly in the Wisconsin Institute of Medical Research on the UW–Madison campus. Clint Thayer/Department of Medicine

In a darkened room in a campus research tower, about a dozen oncologists, pathologists, pharmacists and geneticists from UW Health discussed images and data on dangerous tumors afflicting patients from across Wisconsin.

The Precision Medicine Molecular Tumor Board has a dual mission: consulting with oncologists statewide about targeted drugs to battle out-of-control cancers; and amassing data on what works and what does not.

By focusing on genetic (“molecular”) abnormalities, the tumor board serves as a kind of brain trust for Wisconsin’s cancer doctors and patients: a way to direct the firepower built by the hundreds of years of study, training, practice and experience present in this room, against a disease affecting patients in the state’s 72 counties. The board is a partnership between the UW–Madison Carbone Cancer Center and regional medical centers, including Gundersen Health System, Green Bay Oncology and Aurora Health Care.

The session started with an update via web conference from oncologist Benjamin Parsons of Gundersen in La Crosse concerning an anonymous patient he had first discussed in October. Parsons reminded the board that a full array of surgery, medicine and radiation had failed to restrain her cancer, which featured “muscle involvement in the right chest wall, an early recurrence, mets (metastases) in the lung.”

And then, as Parsons described her “exceptional response” to the targeted drug crizotinib, the images showed her tumors receding, even disappearing. The decision to use crizotinib, he says, was made at Gundersen, but reinforced during the October discussion with the tumor board.

“It is very helpful to have a group of clinicians and scientists to review tumor genomics, as this field is moving very rapidly and it is nearly impossible for an oncologist to stay abreast of all of the current literature,” Parsons says. “The tumor board provides a wonderful service, free of charge, to help interpret complex data and give a sound recommendation in a multidisciplinary collaborative group that will ultimately benefit patients.”

The patient’s identity is now known: We’ll call her “Lisa” for privacy. A mother of four from rural Viroqua, Lisa became the first breast cancer patient known to be successfully treated with crizotinib, a drug designed for a certain type of lung cancer.

In September 2015, a lump in Lisa’s breast was diagnosed as cancer that had spread to the lymph nodes. The “triple-negative” cancer was insensitive to standard drugs that target estrogen or the protein HER2. In March 2016, the cancer seemed headed for remission, but by summer, it came roaring back.

In October, Parsons, Paraic Kenny, a scientist who specializes in precision oncology with the Kabara Cancer Research Laboratory at the Gundersen Medical Foundation and an adjunct clinical associate professor at UW–Madison, and colleagues at Gundersen used high-intensity gene sequencing to discover a “driver mutation” called MET. Driver mutations trigger a cascade of cell growth signals and are a logical target for precision cancer treatment.

Parsons and Kenny identified crizotinib, a drug that targets MET in one type of lung cancer, and Parsons presented that plan to the tumor board. The plan to use crizotinib was based on gene-sequence data from Gundersen, but the multidisciplinary review at the tumor board “solidified our plan to move forward with crizotinib.”

Lisa started the drug in October, and like a Christmas gift right on schedule, scans performed just before the holiday showed a rapid shrinkage or disappearance of the tumors, she says.

In a field often facing the worst, news of Lisa’s progress was welcome news at the tumor board, says Mark Burkard, an oncologist who directs the board and specializes in breast cancer. “The benefit of this group is institutional knowledge about the patients we have seen, the literature, and the in-depth analysis of genetic information on these individual tumors.”

This is a cost-free service to the cancer patients in Wisconsin and beyond, part of the commitment of the Carbone Cancer Center to our state.

The fast-growing ability to analyze the genetics of particular cancers is opening doors to treatment, yet vastly complicating medical decisions. Every finding seems to come with its own qualifications. “You can have mutations in the same gene that function differently, so one turns it on, and one does not,” Burkard says. “We try to figure out what it means, focus on what the actionable information is. By having a group of experts and sequencing technology, we often can do better than a clinician working in isolation.”

The Molecular Tumor Board is a response to the growing recognition that genes may supersede the source organ (such as breast or liver) in guiding treatment. As genetic analysis gets cheaper and faster, expensive drugs that target specific genetic signatures are often the most promising avenue of cancer treatment — and sometimes the only one. As cases from around Wisconsin are presented to the board, the blizzard of genetic shorthand (“a rearrangement of the NF1 gene and a loss of the CDKN2A/B gene”) reinforces the complexity problem.

Extending the symptom-free lifespan relies on overcoming the growing complexity of treatment decisions, Burkard says. The MET abnormality, for example, appears in less than 1 percent of breast cancers, so a test of the MET inhibitor crizotinib against all breast cancers would fail — even if it did help the rare patients with the abnormality.

“For 100 years, we have been defining cancer as lung, breast or GI,” says Burkard, “but if you look at the DNA, sometimes a tumor of the breast looks more like a tumor of the lung, so it makes sense to treat based on DNA rather than the organ of origin.”

In May 2017, for the first time in history, the Food and Drug Administration approved pembrolizumab, a drug for any type of cancer containing a rare, specific DNA pattern, regardless of origin.

Helping the difficult decisions in the emerging era of precision oncology is exactly what the Molecular Tumor Board is designed to do. Since its origin in September 2015, the board has considered 170 cases.  “We look for an unexpected gene change that allows us to pick a targeted drug for that specific cancer,” says Burkard. “Although we do not find this for all patients, when we do, it can be a home run — excellent treatment with few side effects.”

In fact, Burkard hopes that, as the record for precision medicine improves, oncologists will turn to the tumor board earlier in the treatment process. “The price of gene sequencing is falling steadily, and the number of targeted compounds is going up,” he says. “We think we can prolong symptom-free survival and reduce suffering if we’re brought into the process sooner.

“This is a cost-free service to the cancer patients in Wisconsin and beyond, part of the commitment of the Carbone Cancer Center to our state. If we do not learn from both successes and failures, doctors around the state are going to make the same mistakes. We do the best we can with the information we have now, and we are establishing a bank of information from the results we see with these patients. We are going to do better as time goes on.”

Parsons and his colleagues will shortly publish a report on Lisa’s case in Precision Oncology, an offshoot of the Journal of Clinical Oncology. “We are really just starting to understand ‘personalized medicine’ in oncology,” Parsons says. “This is definitely starting to pick up steam. We are discovering new targets and new effective drugs faster than we ever have before.

“This requires more work to understand each individual’s tumor on my part, but it is well worth it. I am hopeful that this will continue and that we ultimately will have better options for patients that meet the goals of improving both their quantity and quality of life.”

There are no guarantees in life, or in cancer, but Lisa accepts the uncertainty. With four children between the ages of 13 and 19, she’s enjoying a new lease on life.

“I have strong faith in God,” Lisa says. “I have told my kids from the beginning, I’m in his hands. I could be killed in a car accident today. I did not know until a few months ago that I was the first breast cancer patient to take this medicine.”