Junior Tamia Fowlkes got an opportunity most journalism students only dream of this week when she interviewed NAACP President Derrick Johnson on “Meet the Press: College Roundtable” about the protests against police brutality playing out around the nation and world.

The five-part streaming series brings in college students from around the country to interview sources and discuss world events. It’s a spin-off from NBC’s “Meet the Press” news analysis show hosted by journalist Chuck Todd.

“I interviewed a few weeks ago, and then they let me know that I would be doing this week’s episode and it’s super exciting,” Fowlkes said. 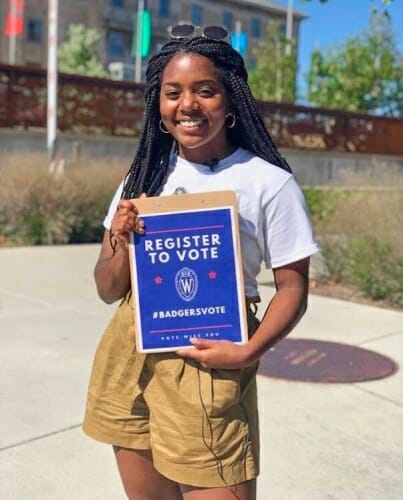 Tamia Fowlkes interviewed the president of the NAACP along with students from Princeton University and the University of Florida.

Fowlkes, who is from Milwaukee, is a very involved student on campus. She is a Big Ten Voting Challenge Intern and Andrew Goodman Ambassador for The Morgridge Center for Public Service, serves as a Student Council representative and member of the Legislative Affairs Committee for the Associated Students of Madison and writes for Bell Magazine, among other things.

She interviewed Johnson along with students from Princeton University and the University of Florida.

“It was a super cool experience just because they very much approached it in a professional way,” she said.

Fowlkes said she is passionate about using journalism as a platform to make other people’s voices heard and worked to reflect that in her questions.

“In the wake of the national conversation that we’re having right now around Black Lives Matter and just how to have improved racial relations I think it was important to be able to ask him, ‘How can campuses and young people hold their leaders accountable and really make meaningful and lasting change in a way that we haven’t seen obviously before?’” she said.

Fowlkes asked Johnson, “With your #WeAreDoneDying hashtag being set to mobilize and encourage people to demand change and action in policing and governing, I was wondering what the significance was for you in deciding to end it on Nov. 3 (the day of the presidential election)? And how will you continue that work after Nov. 3?”

“Nov. 3 is only a juncture in the advocacy for public policy,” Johnson replied. “Without Nov. 3, we cannot put the people in the seats, who are decision makers, the policy makers necessary to implement the policy priorities that we have laid out, so that we can as a community, as a nation, stop dying. We are done dying.”

New episodes of Meet the Press College Roundtable will stream each Thursday at 9:45 p.m. on the streaming channel NBC News Now, and then on Friday on NBC News’ YouTube page, NBC News’ Stay Tuned on Snapchat and NBCUniversal’s streaming service Peacock.