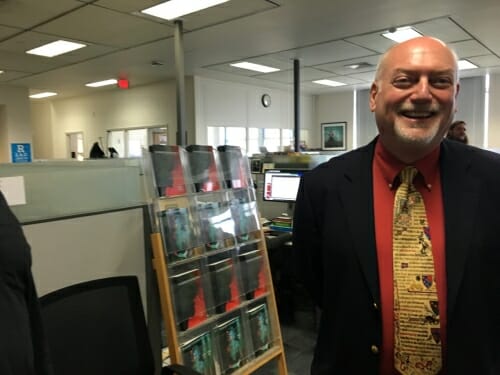 The University of Wisconsin Press found a new physical and administrative home on campus this summer.

Leaving behind leased offices on Monroe Street for newly renovated space on the fourth floor of Memorial Library, the Press is now back on campus in a cost-saving move that also renders staff experts more readily accessible to campus partners.

In a recent email for a UW Press “housewarming,” Dennis Lloyd, director of the University of Wisconsin Press, and Lisa Carter, vice provost for libraries, noted: “This project re-envisioned the use of library space to address a critical campus need and opens the door to greater collaboration as the Press is relocated back to the heart of campus, specifically near the arts- and humanities-focused departments.”

This administrative move better mirrors press alignment at peer institutions where presses report to the chief academic officer. It also allows for potential synergies with other outward-facing campus units in the Office of the Provost, including Wisconsin Public Radio, Wisconsin Public Television and the Division of Extension.

“The Press has a long and distinguished history as a strong public university press,” says Provost Karl Scholz. “With its move to the Office of the Provost, I believe the Press will continue its success in scholarly publishing and timely dissemination of scholarly materials not only statewide, but nationally and internationally.”

While some other universities have defunded or threatened to close their presses in recent years, UW–Madison is investing in its press. In addition to the moves, the Press has recently filled some critical staff vacancies, including a new editor-in-chief, Nathan MacBrien, a new sales and marketing manager, Casey LeVela, and a new business and operations manager, Lisa Learish.

“We are deeply grateful for the opportunity to return to campus for the first time in 23 years,” says Lloyd. “This move, combined with renewed financial and administrative support for the Press, reminds us every day that we are a vital and active part of the scholarly life of the University of Wisconsin.”

Since its founding in 1936, under Executive Director Livia Appel, UW Press has had several physical homes, including Bascom Hall, an old library school on State Street, a building near the current Humanities Building, old homes on Dayton Street, and a former beer distributor’s warehouse.

The Press is one of more than 150 member presses in the Association of University Presses, which states: “Each University Press brings a distinctive vision and mission to its work. Yet we are all guided by, and united in, core values—integrity, diversity, stewardship, and intellectual freedom—that define who we are, the work we do, and the goals to which we aspire.”

Since its first book appeared in 1937, the Press has published and distributed more than 3,000 titles, following review by Press staff, outside experts and a board of University of Wisconsin faculty. UW Press authors come from all over the world, and Press books have been translated into dozens of foreign languages. More than 1,000 book titles are currently in print including general interest, scholarly, and regional books.

The Press also publishes 11 peer-reviewed academic journals in the humanities and social sciences, several of which have been with the Press since the inception of the Journals Division in 1965. Click here to visit the UW Press Journal’s homepage.