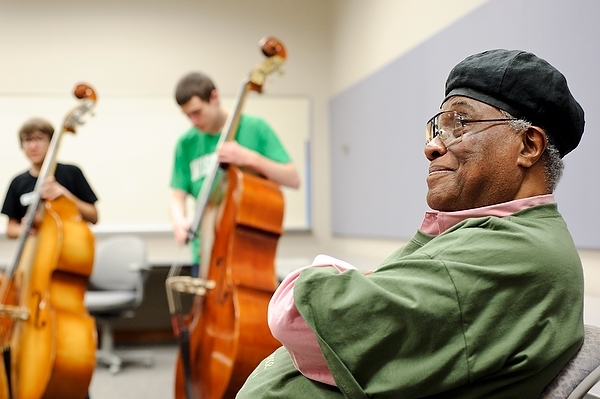 Richard Davis watches as students perform during a classroom session at the annual Bass Conference hosted by the Richard David Foundation in April 2011. Photo: Bryce Richter

The life and ongoing legacy of bassist Richard Davis were celebrated Thursday at Madison’s Overture Center for the Arts. The humanitarian and emeritus professor of music was fêted with music and multimedia tributes during an evening filled with laughter and love.

“Richard Davis has lived out the Wisconsin Idea in everything he’s done as a teacher and performer,” says Susan Cook, director of the Mead Witter School of Music at the University of Wisconsin–Madison.

“He has shared his musical expertise with audiences of all kinds and in all kinds of places,” she says. “He inspired generations of students who carry on his musical mission and has aptly been recognized as a jazz treasure.”

“Passing the Bass: A Global Tribute to Richard Davis” was emceed by Peter Dominguez, professor of jazz studies and double bass at the Oberlin Conservatory of Music. He’s also a former student of Davis’, and he led the on-stage jazz combo in selections that were often bittersweet.

Davis, with white shirt, blazer and ash-colored beret, was brilliantly lit by a spotlight throughout. From his wheelchair in the stage-left box, he periodically reached out, spreading his fingers, as if to physically embrace the performances.

“He inspired generations of students who carry on his musical mission and has aptly been recognized as a jazz treasure.”

Davis’ arrival at UW–Madison in 1977 was never likely. A Chicago native, he worked for 23 years in New York City, establishing himself as one of the world’s premier bass players. He has performed with Van Morrison, Frank Sinatra, Bruce Springsteen, Barbra Streisand and Sarah Vaughan. Besides the United States, Davis has toured Cuba, Europe, Hong Kong, Israel, Japan, Puerto Rico and South America. The DownBeat International Critics Poll named him Best Bassist from 1967 through 1974.

And then, he once recalled, “I got a call offering me a job at the university in Madison because they didn’t have a bass teacher on campus. I said, ‘Where’s Madison?’ I asked around if anyone had heard of the place because this school kept calling me.”

Davis had letters of recommendation from Leopold Stokowski and Leonard Bernstein. But the School of Music could not have known that its new professor of classical and jazz bass, jazz history and combo improvisation was going to teach a lot more than just music.

“I teach character,” Davis once said. “That’s the most important thing for me — follow-through and hard work.”

During “Passing the Bass,” a variety of his students spoke in video clips, summarizing their experience:

“How to be the best student you can be.”

“Music is a form of social rebellion.”

“I teach character,” Davis once said. “That’s the most important thing for me — follow-through and hard work.”

On campus and in the community, Davis has taken part in many initiatives to combat racism, earning the City of Madison’s Martin Luther King Jr. Humanitarian Award. With the Office of the Chancellor, Davis in 1998 created the Retention Action Project to open dialogue about multicultural differences. In 1993 he founded the Richard Davis Foundation for Young Bassists.

“Passing the Bass” began with a Ho-Chunk blessing delivered by tribal member Eric Logan, who recalled a legend describing “the heartbeat of mother earth.” Outside, the lobby of Overture’s Capitol Theater was filled with polished wood, brass and crystal — just a selection of the many awards and honorary degrees that Davis has received.

But the framed letters were even more astonishing. “You gave much contribution in order to promote welfare of atomic bomb victims and physically handicapped people in Nagasaki,” wrote that city’s mayor, Hitoshi Motojima, in 1988. “We are very grateful for your kindness and help.”

President Barack Obama wrote in 2014, congratulating Davis for his National Endowment for the Arts Jazz Masters award. Displayed next to it was Davis’ response. “Your note was encouraging to say the least,” he wrote, signing it, “Love, Cousin Richard.”

The highlight of “Passing the Bass” was the unveiling of a sign for a new Madison street, “Richard Davis Lane.”

More than 1,000 people attended, and they concluded the 90-minute program with a standing ovation.

For more information about the Richard Davis Foundation, visit richarddavis.org.