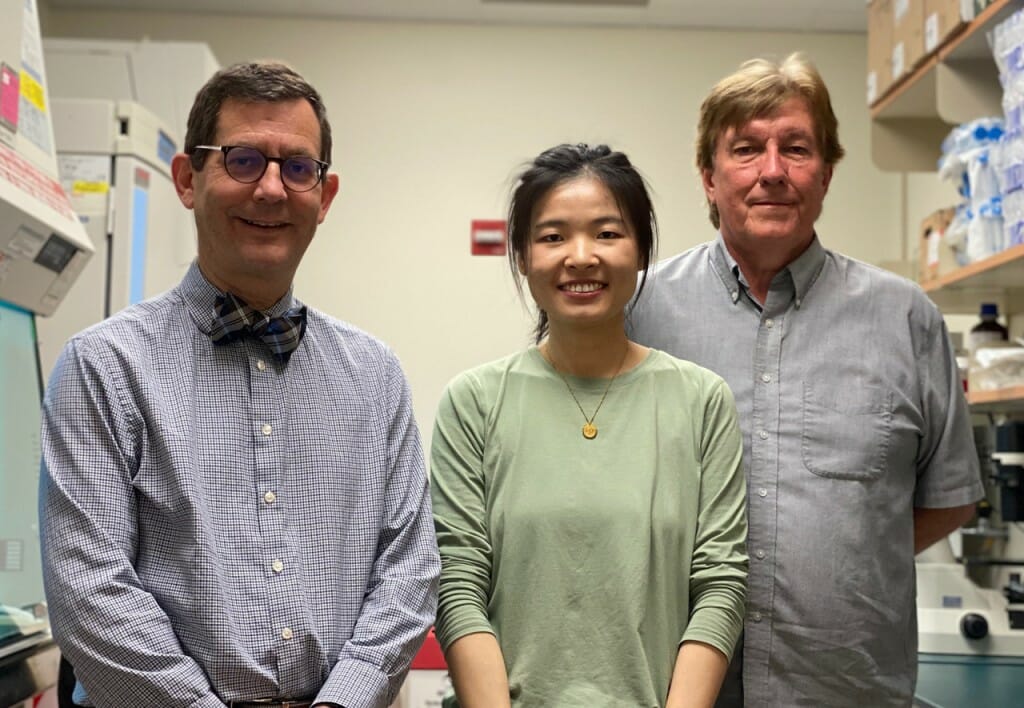 Two of the most common genetic changes that cause cells to become cancerous, which were previously thought to be separate and regulated by different cellular signals, are working in concert, according to new research from the University of Wisconsin–Madison.

To date, researchers have focused on finding drugs that block one or the other to treat cancer. Understanding their cooperative effects may lead to more effective treatments.

Cells muster a protein, called p53, which acts inside the cell nucleus to respond to stress, but mutations of the gene that produces p53 are the most frequent genetic abnormalities in cancer. Mutations activating a cellular pathway called PI3K/Akt, located on the surface of cells, are also often implicated in runaway cell growth in cancer. 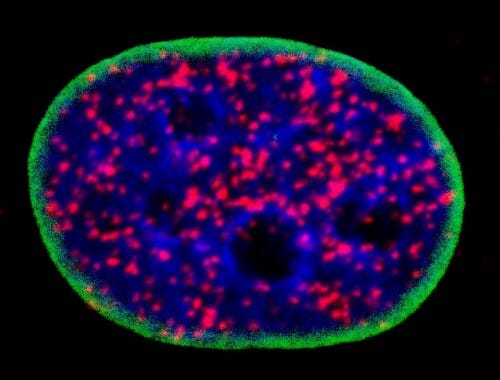 Outlined in green, this nucleus of a cancerous cell contains DNA in blue and red blobs marking the cell’s p53 protein binding with parts of the Akt cellular signaling pathway, a partnership that will prevent the cancerous cell from dying as it should and instead prolong its life and lead it to divide into more cancer cells. Image by Mo Chen

Cellular signaling pathways allow cells to accomplish important communications tasks that maintain healthy cell functions. The process is a bit like sending mail, which requires a specific series of steps and appropriate stamps and marks on the envelope to deliver a letter to the correct address.

A team led by UW–Madison cancer researchers Richard A. Anderson and Vincent Cryns has discovered a direct link between the p53 and PI3K/Akt pathways. The findings, published today in the journal Nature Cell Biology, identified links in the pathways that make promising targets for new cancer treatments.

“We have known for some time that lipid messenger molecules that activate the PI3K/Akt pathway found in membranes are also present in the nucleus of cells,” says Anderson, a professor at the UW School of Medicine and Public Health. “But what they were doing in the nucleus separate from membranes was a mystery.”

Mo Chen, an associate scientist and first author of the new study, used chemotherapy drugs to stress cancer cells and damage their DNA as they were replicating, or creating new copies of themselves (which cancer cells do often). She discovered that proteins called enzymes that are part of the PI3K/Akt pathway bind to the mutated p53 protein in the nucleus of the cell and attach lipid messengers to p53, showing the two are directly linked.

Instead of entering apoptosis — the proactive process of cell suicide which removes damaged cells — the cancer cells repaired their chemotherapy-damaged DNA and went on growing and dividing, promoting cancer growth.

“These results also have critical implications for cancer treatment,”

“Our finding that the PI3K/Akt pathway is anchored on p53 in the nucleus was entirely unexpected,” says Cryns, a physician-scientist and professor at UW School of Medicine and Public Health.

The PI3K/Akt pathway was thought to be confined to membranes.

“These results also have critical implications for cancer treatment,” Cryns says. Current treatments that target PI3K may not work because they operate on a different enzyme than the one in the pathway the research team discovered.

The enzyme in the new pathway is called IPMK and rendering it inactive keeps p53 proteins from binding with and activating the Akt pathway, like correcting the address on an envelope so it doesn’t go to the wrong place. This prevents the pathway from benefitting cancer cells, making IPMK a promising new drug target.

The researchers, whose work is supported by the National Institutes of Health, the Department of Defense and the Breast Cancer Research Foundation, have also identified another enzyme, called PIPKIa, that is a key regulator of both p53 and Akt activation in the cell nucleus.

The team had previously shown that PIPKIa stabilizes the p53 protein, allowing it to be active. When PIPKIa was turned off, p53 levels inside the cell fell sharply. In the new study, the team showed that blocking PIPKIa by genetic approaches or a drug triggered cancer cell death by preventing p53 from activating Akt in the cell nucleus.

“What this means is that drug inhibitors of PIPKIa will reduce mutant p53 levels and block Akt activation in the nucleus, potentially a very powerful one-two punch against cancer cells,” Cryns says. Their team is actively searching for better PIPKIa drug inhibitors that could be used to treat cancers with p53 mutations or abnormally active PI3K/Akt pathway.

In addition to searching for drugs to block the newly discovered cancer pathway, the scientists are investigating whether other proteins in the cell nucleus are targets of the PI3K/Akt pathway.

“We know other nuclear proteins are modified by lipid messengers like p53, but we have no idea how broad the landscape is,” Anderson says.

However, the evidence suggests that this could be a feature shared among many kinds of cancers, “a mechanism we are calling a third messenger pathway,” he adds.