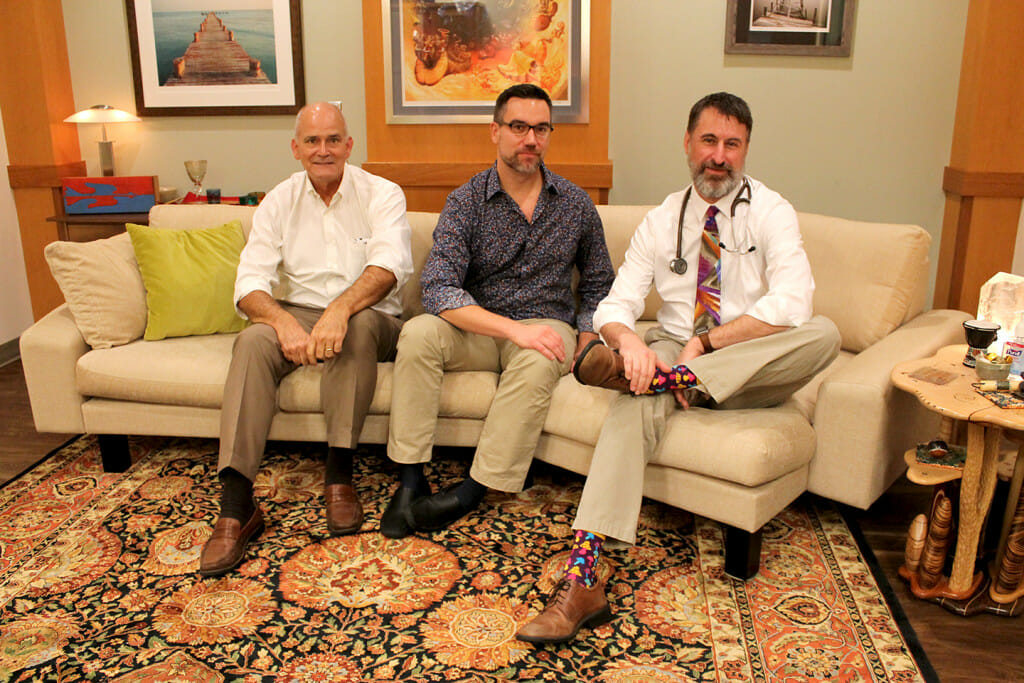 Three million people in the United States have had opioid use disorder, and another 1.5 million people have dealt with methamphetamine misuse within the last year alone.

But two new groundbreaking clinical trials out of the UW Transdisciplinary Center for Research in Psychoactive Substances (TCRPS), housed within the University of Wisconsin–Madison School of Pharmacy, aim to address these pressing issues with a promising psychoactive agent: psilocybin.

The drug has shown encouraging results for patients with depression and with tobacco and alcohol misuse. Now, a UW–Madison research team is investigating the use of psilocybin to aid in decreasing opioid and methamphetamine misuse.

The team includes Paul Hutson — professor in the School’s Pharmacy Practice and Translational Research Division and founding director of the TCRPS — as well as Randall Brown and Christopher Nicholas, faculty in the UW School of Medicine and Public Health.

The pair of clinical trials represent groundbreaking firsts in their use of psilocybin and their flexible design.

“We already have evidence that psilocybin can do some remarkable things to improve the patient’s ability to gain and process important insights about their lives and experiences,” says Hutson, a co-investigator on both studies. “We’re excited to see what it can do along those same lines for patients struggling with substance abuse, many of whom have overlapping mental health conditions.”

Both trials are open-label, single-arm trials, meaning there is no control group or placebo. The goals of the trials are to test for safety and feasibility — once established, this groundwork will allow for future studies about the treatment’s effectiveness.

Every participant in these trials will undergo a psychological screening and at least six hours of preparatory counseling. Participants will then receive at least one 25 milligram dose of psilocybin and be observed for eight hours by two therapists in the School of Pharmacy’s dedicated clinical research facility — an unparalleled space that resembles a living room, decked out with the comforts of home plus monitoring technology to ensure study replicability. 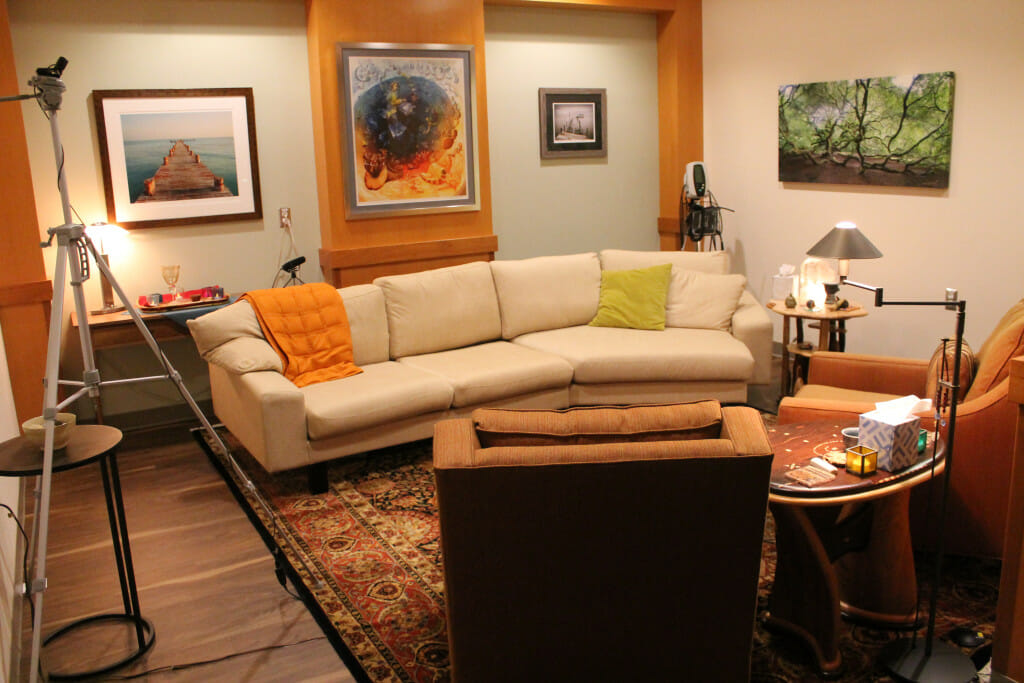 Trial participants will spend eight hours of observation in the School of Pharmacy’s clinical research facility (pictured) under the observation of two therapists. Sally Griffith-Oh 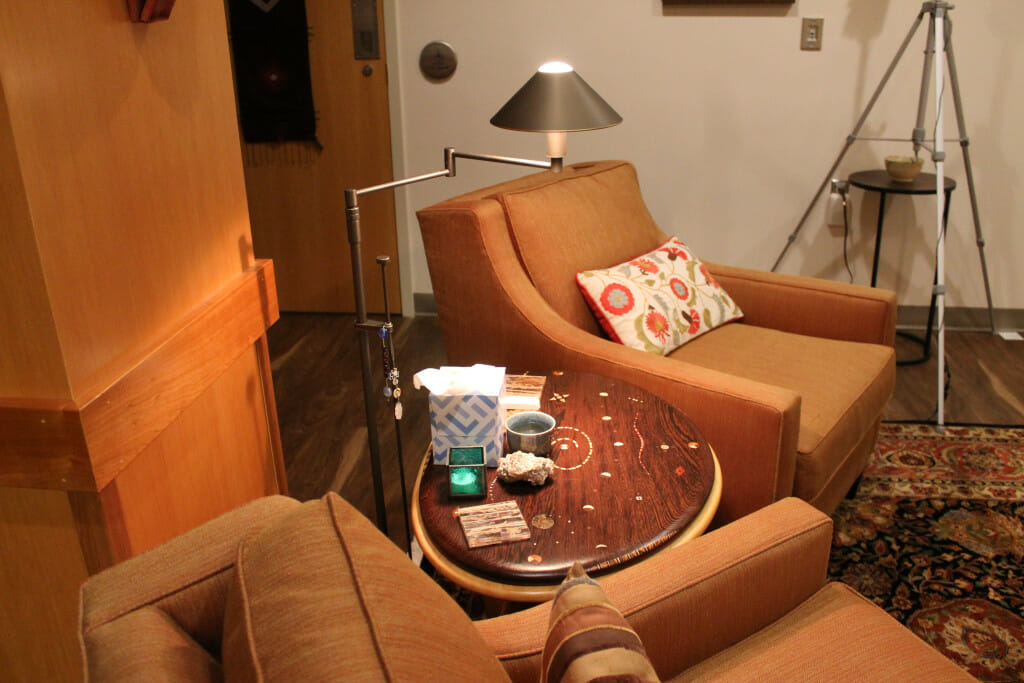 After monitoring, participants will spend the night in the clinical research unit at UW Hospital, followed by an integration, or debriefing, session with a psychologist before they’re discharged.

“To be optimally therapeutic, psychedelic drugs need to be integrated with an adequate preparation and screening of patients to confirm that they are appropriate to receive these medications, that they are attended by trained therapists and that they then have one or more integration sessions afterward so they can have some guided interpretation of their experience,” says Hutson. “We also recognize the need to provide subsequent support of the patients to reinforce desired behavioral and lifestyle changes. That can be a challenge in this patient population.”

Four weeks after the first dose, participants will have the option to take a second dose of either 25 or 50 milligrams, based on whether they received an adequate psychedelic experience the first time.

“A component that’s remarkably different than other psilocybin studies is this option of increasing the dose, for both the opioid and methamphetamine studies,” says Hutson. “That’s uncommon and will test the idea of whether there’s a dose response to outcomes from psychedelics.”

Participants in drug trials often face stringent eligibility criteria, but the UW­–Madison team is rethinking historic exclusionary conditions in favor of including persons more representative of those abusing opioids or methamphetamine.

“If we’re going to recruit a sample of patients that’s more helpful to clinical practice in terms of how generalizable it is, we need to do careful thinking about this balance of eligibility and what issues are likely to affect safety,” says Brown.

Participants’ final follow-up visit is two months after the last dose, at which time patients’ psychedelic experiences and any changes in substance use will be evaluated.

Historically, clinical trials addressing methamphetamine use disorder see many participants drop out, compromising the results. Clinical trials are quite rigorous and time consuming, so these two studies are designed to be as flexible as possible.

The team is recruiting individuals who are actively using methamphetamine — another aspect of the study that breaks new ground. Typically, participants in substance misuse trials have detoxed and been stabilized. Studying active users will enable the researchers to take a closer look at how addiction and psilocybin impact the brain through MRI scans. Scans will be taken before and after each psilocybin dose to acquire early data on how networks in the brain associated with addiction, mental health and well-being may change across the course of the study.

“We’ll hopefully be able to correlate these changes in various outcome measures, whether it’s mood, addiction-related constructs, well-being or emotional measures,” says Nicholas, the principal investigator of the methamphetamine study. 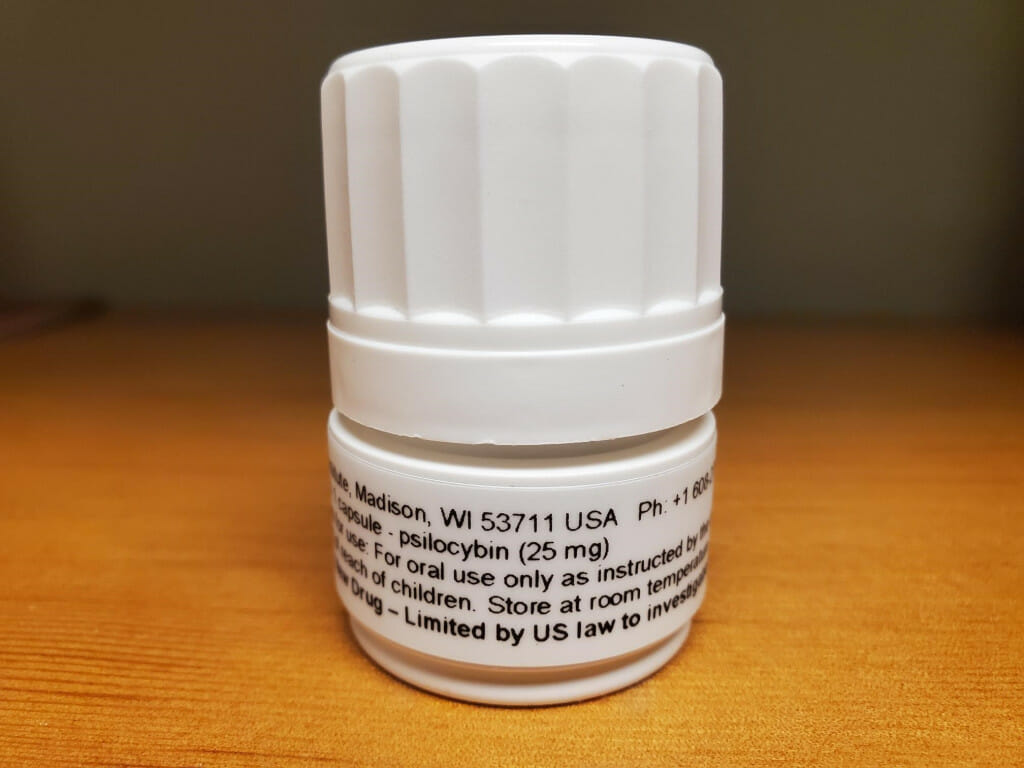 The vial in which the psilocybin capsules are delivered to the School of Pharmacy for clinical research. Sally Griffith-Oh

Studying those who misuse opioids requires some additional considerations for safety because of risks associated with overdose and mortality that goes along with fentanyl and similar drugs, Brown says. Preventing withdrawal symptoms with buprenorphine can help individuals avoid using far riskier street drugs.

The opioid use disorder study got underway in 2021, and the methamphetamine use disorder study is beginning recruitment. Although both studies are in their early stages, the research team expects they will add to the scientific and cultural understanding of psilocybin. One of the myths the team hopes to dispel is that a treatment with psilocybin is simply trading one drug for another.

“There’s no evidence that psilocybin and LSD are addictive agents,” says Hutson.

And despite encouraging findings across a range of conditions, the clinical environment — not just psychedelics themselves — is key to patient success.

“They’re not a quick fix,” says Nicholas. “They have the potential to be very helpful for a number of mental health and substance use disorders, but it’s a full package treatment that involves counseling before and after to prepare and make sense of these experiences.”

The clinical trial exploring psilocybin for methamphetamine use disorder is funded through a partnership with Revive Therapeutics. The opioid misuse trial is funded by the Heffter Research Institute and a gift from the Etheridge Foundation. Those interested in participating in either study can register their interest by emailing protea.research@mailplus.wisc.edu.
Share via Facebook
Share via Twitter
Share via Linked In
Share via email