To sleep, perchance to forget 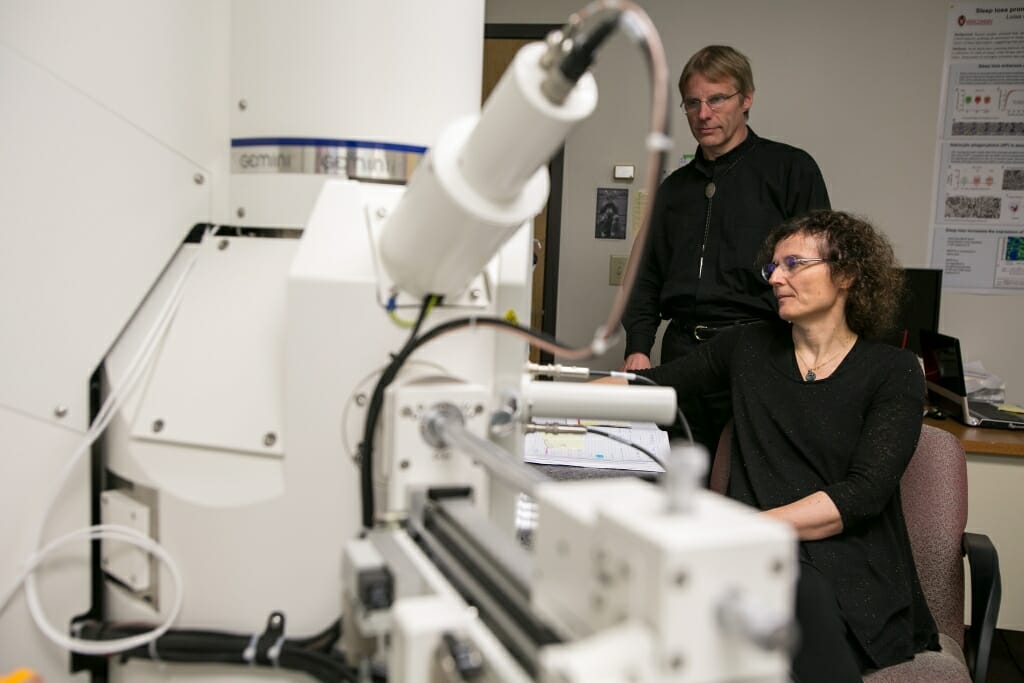 Giulio Tononi and Chiara Cirelli in the lab at the Wisconsin Institute for Sleep and Consciousness. Photo: John Maniaci

The debate in sleep science has gone on for a generation. People and other animals sicken and die if they are deprived of sleep, but why is sleep so essential?

Psychiatrists Chiara Cirelli and Giulio Tononi of the Wisconsin Center for Sleep and Consciousness proposed the “synaptic homeostasis hypothesis” (SHY) in 2003. This hypothesis holds that sleep is the price we pay for brains that are plastic and able to keep learning new things.

A few years ago, they went all in on a four-year research effort that could show direct evidence for their theory.

The result, published in February 2017 in Science, offered direct visual proof of SHY. Cirelli, a professor in the University of Wisconsin’s School of Medicine and Public Health, expanded on the research today (Feb. 17, 2018) at the annual meeting of the American Association for the Advancement of Science.

Striking electron-microscope pictures from inside the brains of mice suggest what happens in our own brain every day: Our synapses — the junctions between nerve cells — grow strong and large during the stimulation of daytime, then shrink by nearly 20 percent while we sleep, creating room for more growth and learning the next day.

A large team of researchers sectioned the brains of mice and then used a scanning electron microscope to photograph, reconstruct, and analyze two areas of cerebral cortex. They were able to reconstruct 6,920 synapses and measure their size.

The team deliberately did not know whether they were analyzing the brain cells of a well-rested mouse or one that had been awake. When they finally “broke the code” and correlated the measurements with the amount of sleep the mice had during the six to eight hours before the image was taken, they found that a few hours of sleep led on average to an 18 percent decrease in the size of the synapses. These changes occurred in both areas of the cerebral cortex and were proportional to the size of the synapses.

The study was big news, picked up by outlets including The New York Times and National Public Radio. It was bolstered by a companion Johns Hopkins University study that analyzed brain proteins to also confirm SHY’s prediction that the purpose of sleep is to scale back synapses.

For Cirelli, the study was a big gamble that paid off. But she’s not resting on her laurels. Her lab is now looking at new brain areas, and at the brains of young mice to understand the role sleep plays in brain development.