Through ‘radical’ project, students are turning unwanted jewelry into pieces to be cherished anew 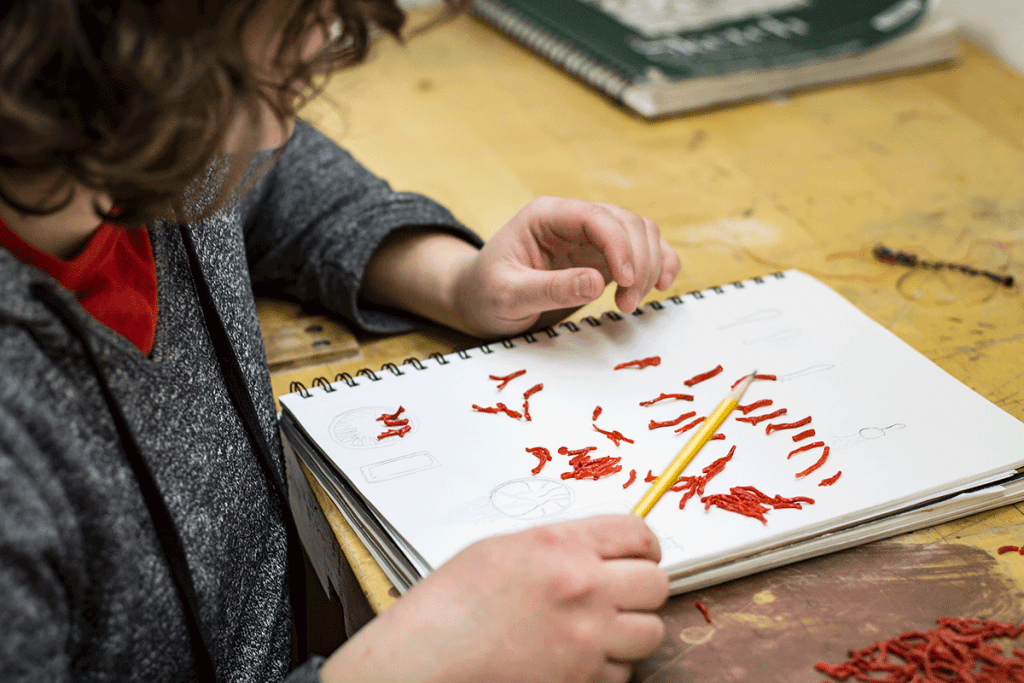 UW–Madison graduate student Chloe Darke, a participant in “Radical Jewelry Makeover: Wisconsin,” sketches ideas for new jewelry she could make from pieces of old coral. The project promotes the ethical sourcing of materials through recycling and reuse. Photo by Emily Hamer 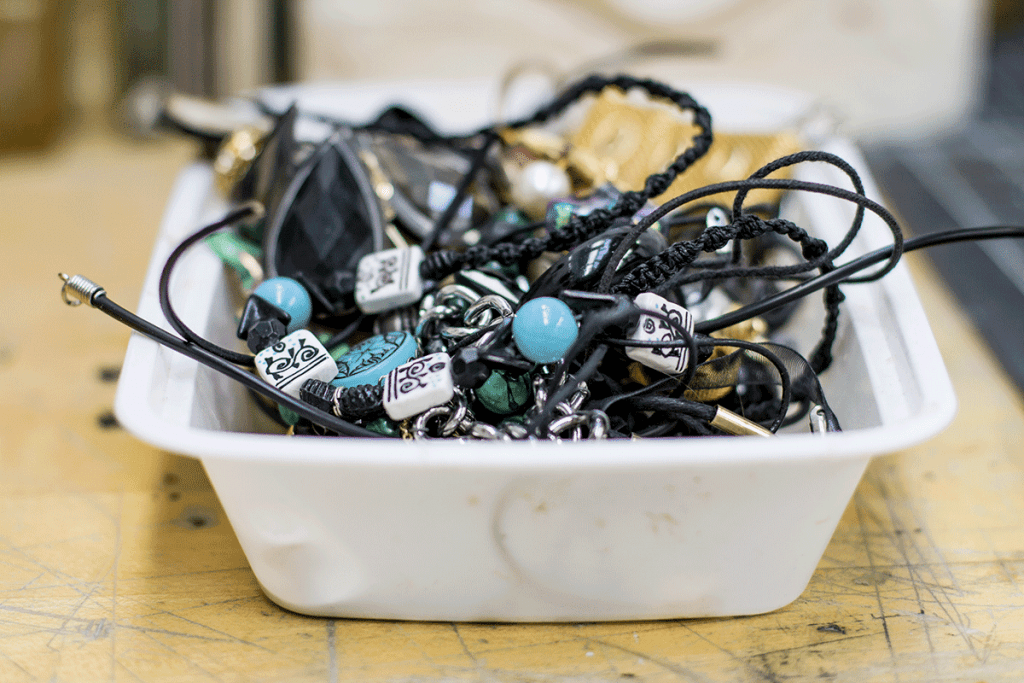 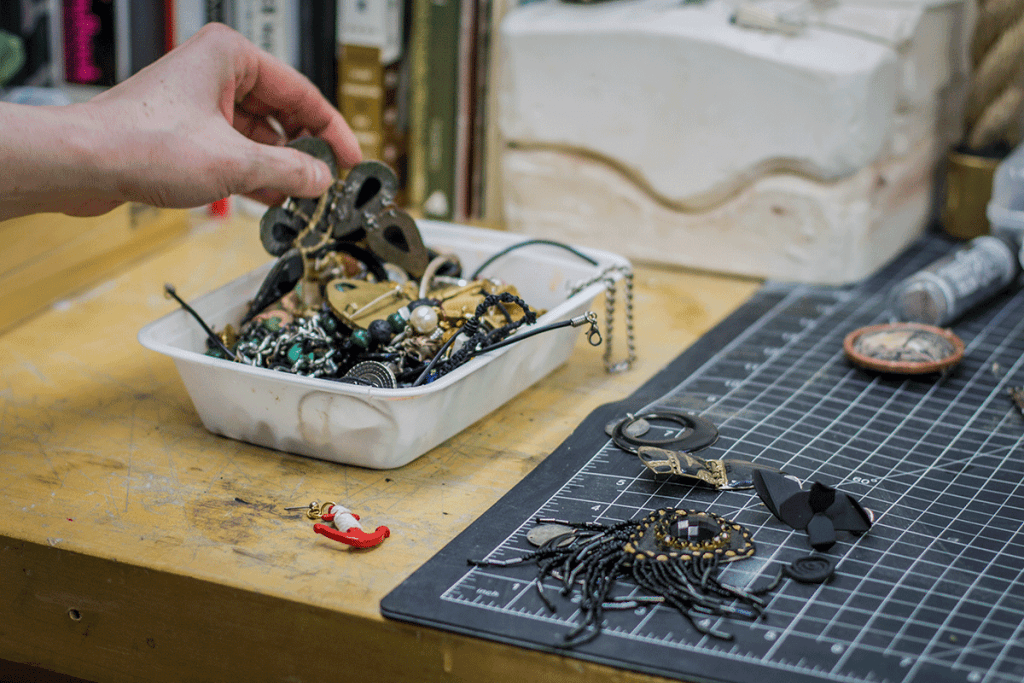 UW–Madison graduate student Cate Richards looks through some of the unwanted jewelry she plans to transform into new pieces. “You can tell the jewelry has been worn, that it’s been loved.” Photo by Emily Hamer 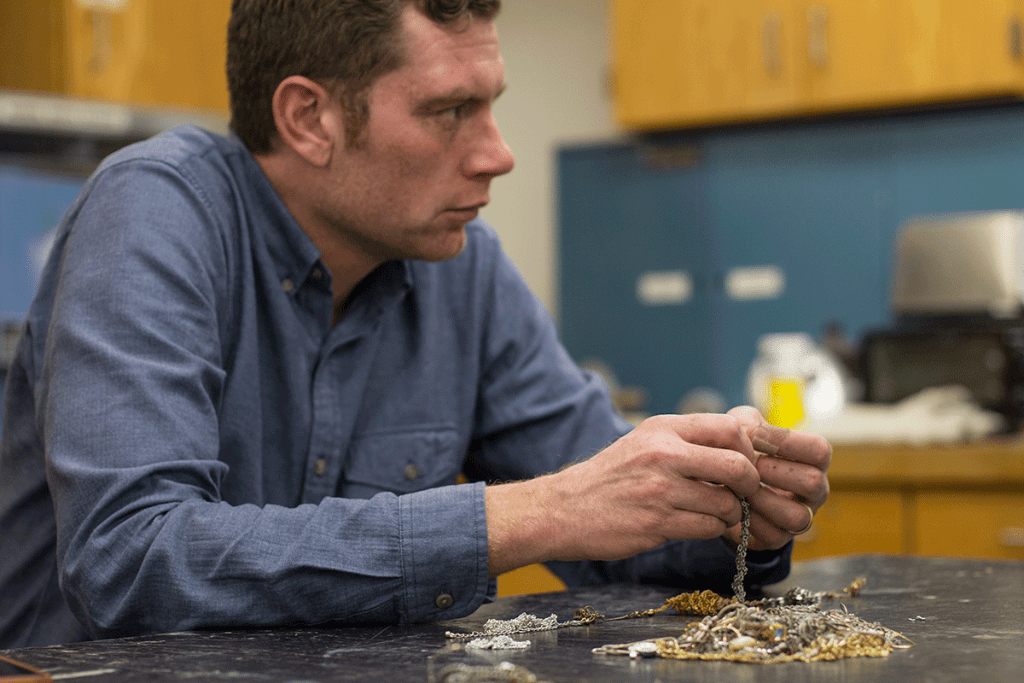 Jeffrey Clancy, an assistant art professor at UW–Madison, says one of the things he likes about “Radical Jewelry Makeover: Wisconsin” is that it allows students to enjoy the creative process intuitively, without the worry of a grade or a class. He’ll be making jewelry alongside his students. “I wouldn’t ask them to do something that I wouldn’t do myself,” he says. Photo by Emily Hamer 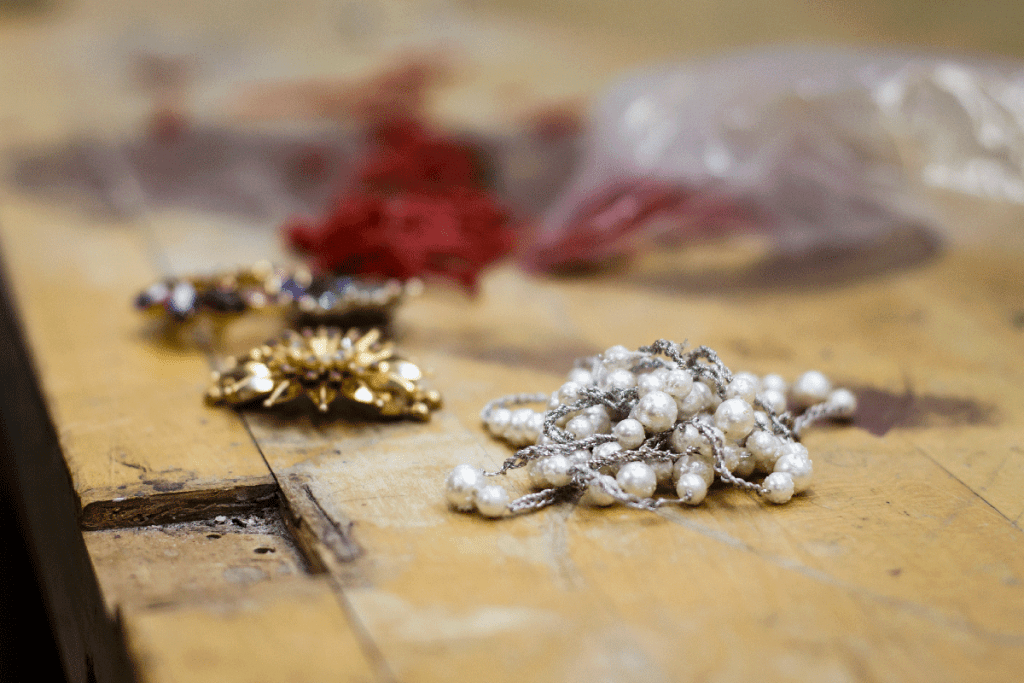 The raw materials Chloe Darke plans to use as a participant of “Radical Jewelry Makeover: Wisconsin” include a strand of fake pearls, three metal brooches and dozens of salmon-colored coral beads. All of the items used in the project are donated. Photo by Emily Hamer 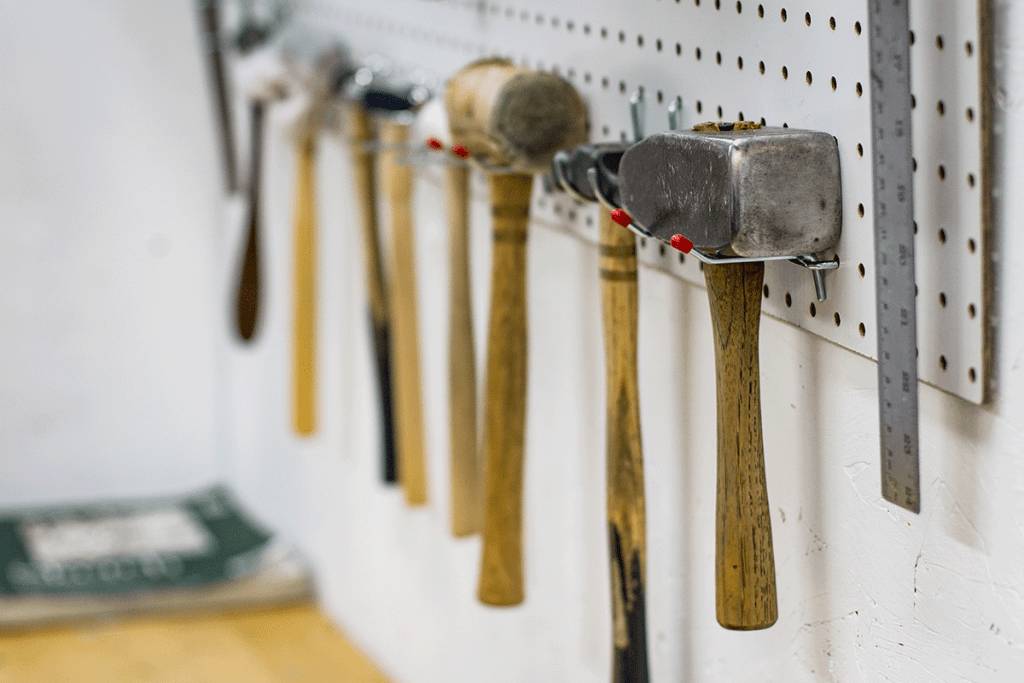 All six graduate students studying metalsmithing at UW–Madison are taking part in “Radical Jewelry Makeover: Wisconsin.” These are some of the tools of their trade. Photo by Emily Hamer

At her studio in the Humanities Building, UW–Madison metalsmithing student Chloe Darke sketches ideas in a notebook as she puzzles through a design challenge.

The raw materials she’ll use, all donated by strangers, lie in front of her: a strand of fake pearls, three metal brooches, dozens of salmon-colored coral beads.

Darke is taking part in “Radical Jewelry Makeover: Wisconsin.” By the end of the months-long project, she and several of her fellow UW–Madison students will have transformed unwanted jewelry into fresh pieces. The finished items will be displayed at an art exhibit, then available for purchase, with the proceeds benefitting charity. 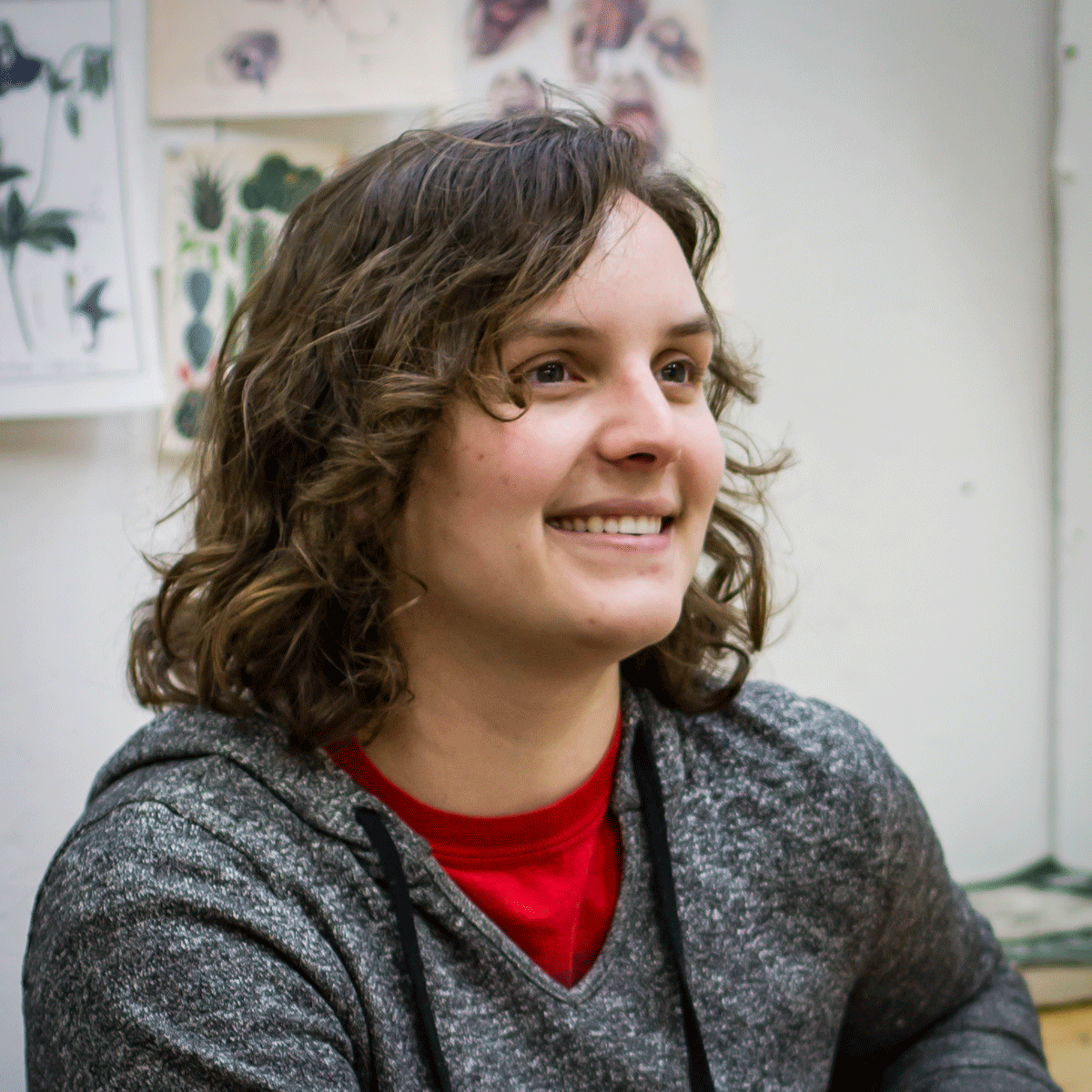 The approach, part of a national movement, draws attention to talented designers while making a larger point. Many materials used in jewelry production are sourced from sacred lands, disputed territories and some of the poorest countries in the world, often at a great cost to the environment. By recycling old jewelry, the project promotes an alternative supply chain, one based on protecting and sustaining the earth.

The project is an effort of Ethical Metalsmiths, a nonprofit organization founded in 2004. The first Radical Jewelry Makeover took place in 2007 at Virginia Commonwealth University in Richmond, Virginia. This is its 14th iteration.

“I’d previously heard of Ethical Metalsmiths, but I hadn’t really considered applying what they do to my own studio practice,” says Darke, a second-year MFA student from Groveland, Massachusetts. “Now I’m trying to buy materials from businesses that I know are not harming the earth or negatively impacting human labor.”

Jeffrey Clancy, an assistant art professor at UW–Madison, says he jumped at the chance for his students to participate in the project, which they are doing as an extracurricular activity, not as part of a class. Students from UW–Milwaukee and UW–Stout also are taking part.

“Especially today, I think it’s good to be part of anything that has a positive effect on the planet or that is just positive in general,” he says. “A project like this promotes outreach, reinforces citizenship, and encourages being part of a larger community. Those are all concepts we talk about peripherally but don’t always bring directly into the classroom.” 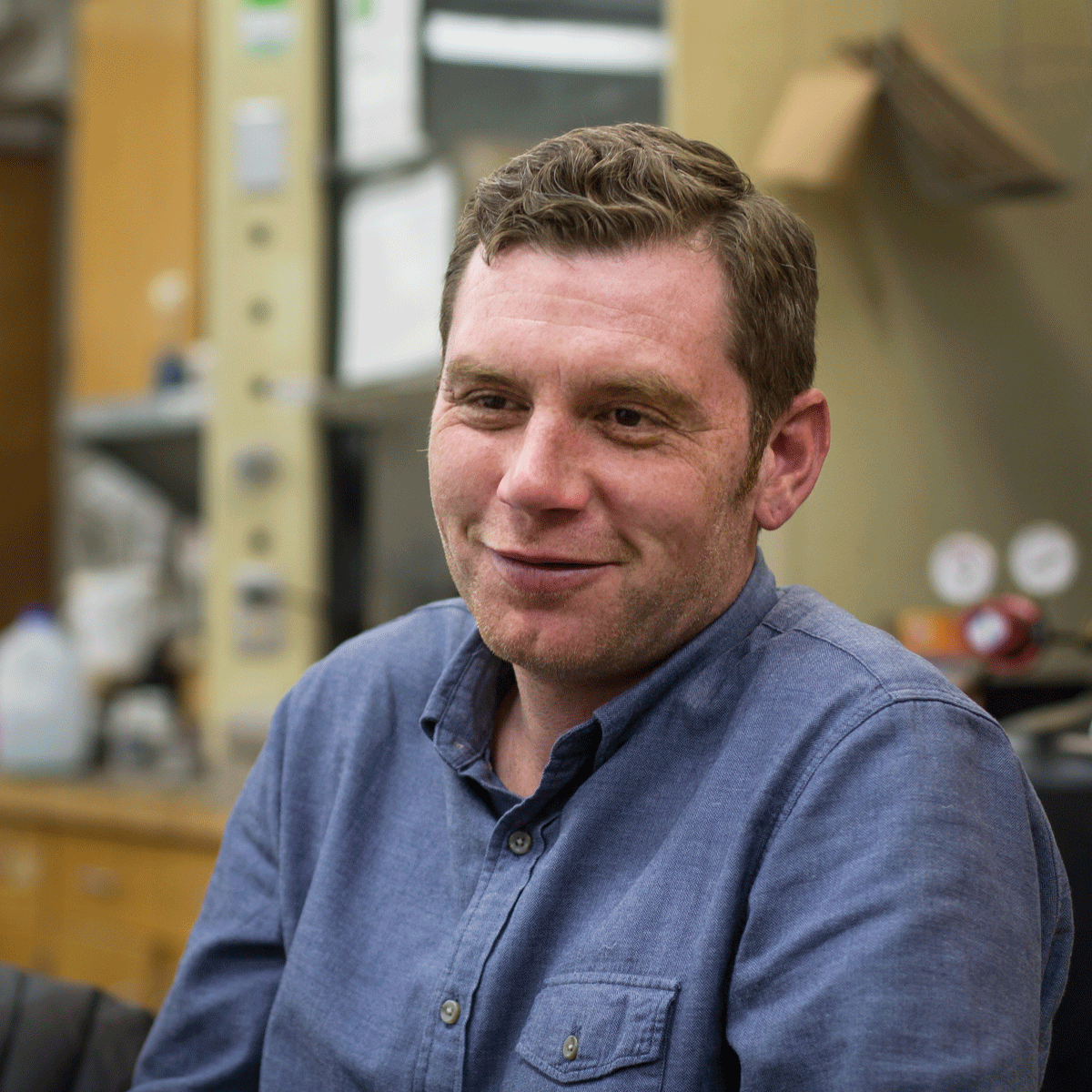 Clancy also likes the collaborative aspect of the project —students will have opportunities to interact with peers, professors and professional jewelers from other institutions and the community.

The project relies on donations of old jewelry from people in the community. Madison-area residents came through strongly, contributing enough unwanted items to fill 12 medium-sized cardboard boxes. The collection phase was aided by a February article in the Wisconsin State Journal that publicized the donation opportunity.

“People were so generous,” says Cate Richards, a first-year MFA student from Lawrence, Kansas. “You can tell the jewelry has been worn, that it’s been loved. Part of the fun is imagining backstories for each of the items.”

In some cases, the donors provided those backstories.

“My recently deceased wife was a jewelry artist and I wanted some of her pieces to continue to sparkle,” wrote one man.

“My grandmother recently had to move to an assisted-living facility,” wrote another. “Letting go of things was extremely difficult for her. Hopefully these pieces will find new purpose in life.” 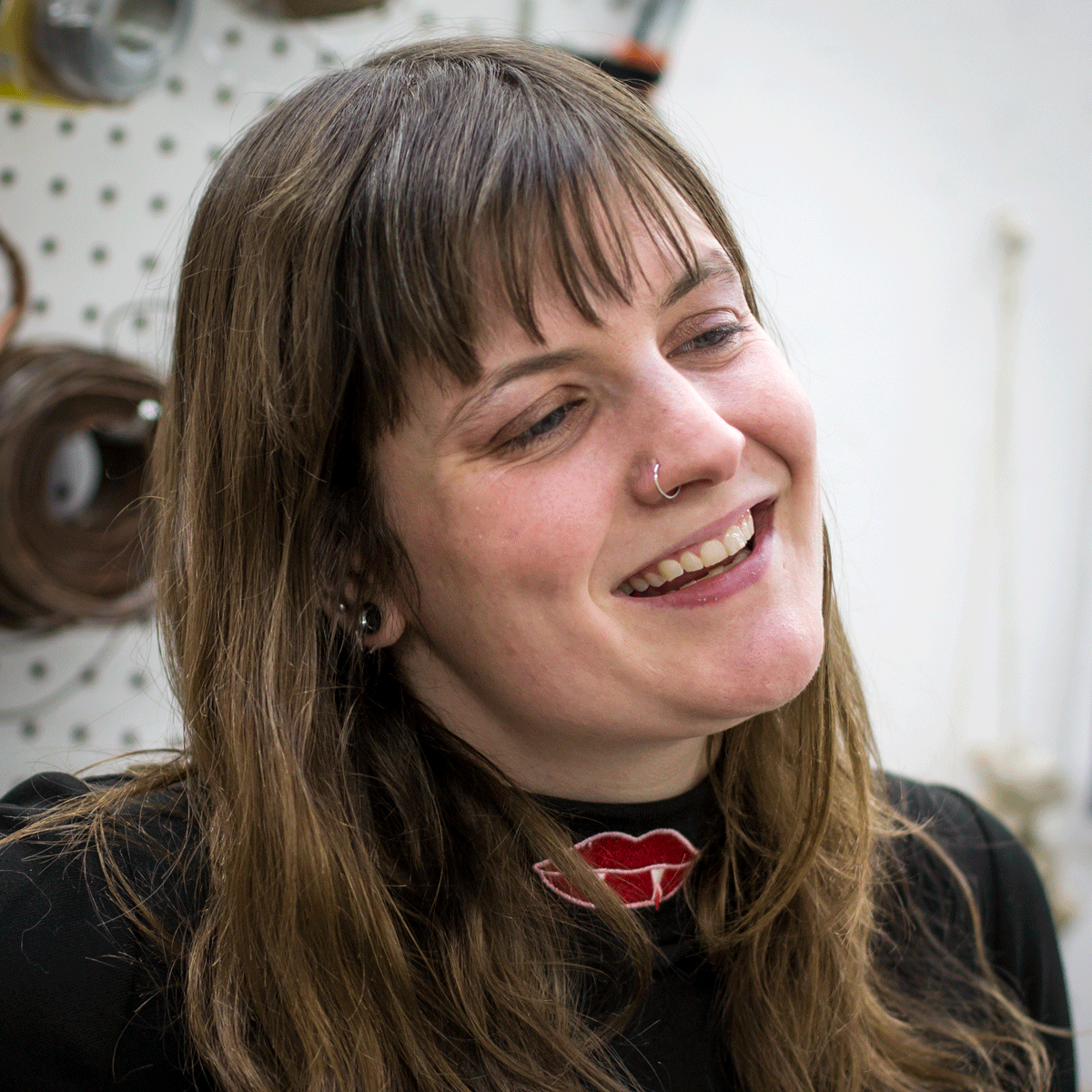 Many people expressed gratitude — and often relief — to have found a home for unwanted bracelets, rings and pins. “My mother-in-law gave me these earrings,” wrote a woman. “A sweet gesture, but I hate them.”

Then there were the oddities: a molar with a silver filling; a tiny snuff bottle; chandelier crystals.

“It was really kind of all over the place, but that’s part of the challenge,” Darke says.

All six graduate students studying metalsmithing at UW–Madison are participating in the project, and some undergraduate students may, too. In some cases, the students will be melting the old jewelry and forging new pieces with the reclaimed metal.

The items will be displayed at the Union Art Gallery at UW­–Milwaukee from April 13 through May 11, then available for purchase. Donors have received discount coupons to apply toward the purchase of a new piece. Sales will benefit scholarships for UW art students and the efforts of Ethical Metalsmiths.