Several years and tens of thousands of words into writing their doctoral dissertation, you’d think few graduate students would sign on to write even more.

And yet over the last decade, dozens of University of Wisconsin–Madison students have done exactly that. They’ve chosen to add one more chapter to their thesis, distilling years of hard-won scientific knowledge into prose understandable by the broader public, something rarely found in a dense document typically written for other scientists.

“It is for the purpose of sharing the joy of the human endeavor that we call science,” explains Bassam Shakhashiri, a professor of chemistry at UW–Madison who is the architect of the thesis-writing program and a longtime advocate for public science education. As the program enters its second decade, Shakhashiri envisions its expansion to all scholarly research in every corner of campus.

Known as the Wisconsin Initiative for Science Literacy Thesis Award Program, the project began in 2010 with an invitation to graduate students in chemistry to add a new chapter to their thesis explaining their research in accessible terms. It has since expanded to all science and engineering disciplines. Eighty-three students have taken part through 2020.

The program’s mission is to both promote science literacy among the public and recruit future generations to careers in scientific research with an approachable look at the latest findings and at how science is done. 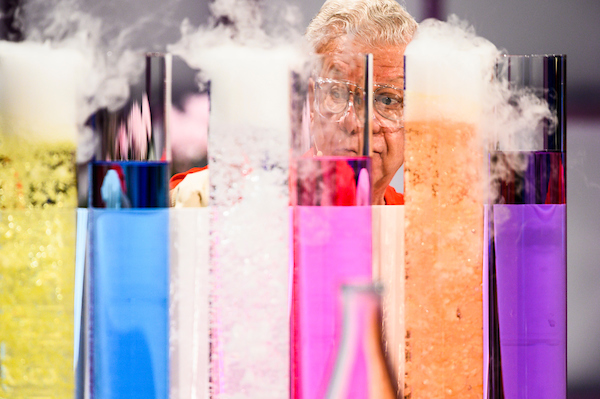 Bassam Shakhashiri performs a chemistry experiment during “Once Upon a Christmas Cheery in the Lab of Shakhashiri” at the Middleton Performing Arts Center on Dec. 1, 2019. Started in 1970 as an end-of-the-fall-semester freshman chemistry lecture, the tradition has evolved into an annual science outreach event. Photo: Jeff Miller

Over the years, students have gotten creative with their chapters. In 2014, chemistry graduate student Veronica Berns drew hers as a comic. And biochemist Ambalika Sagarika not only wrote about her work researching antibiotic resistance, she also danced about it.

“Looking back, I’m not sure I would have discovered my passion for science communication if it wasn’t for the opportunities provided by the UW Chemistry Dept. and WISL,” 2011 chemistry graduate Matt Windsor wrote to Shakhashiri after securing a job in scientific outreach. “Thank you.”

The program provides support to help students shape a challenging text that they have not been trained to write. An extensive set of guidelines steers the early drafts. Then an editor, supported by funds from the Graduate School, provides further feedback. The project encourages active, personal voice, creative analogies, and the excision of dense jargon — a departure from typically stoic, abstract scientific prose.

“Going through a few iterations of revisions aided me in adding clarity to scientific areas where I had expert-to-novice blind spots,” says Elizabeth Laudadio, who completed her chemistry PhD this year. “It was a fun challenge for me to figure out how to communicate complex concepts in an understandable way.”

As an incentive, the program offers a prize of $250 for students who participate. But it’s not about the money, says Shakhashiri. “Almost invariably, they say, ‘(The award) caught my attention, but I did it because I began to understand how important it is to me to share what I have done with others’.”

The chapters serve as springboards for other conversations, whether with friends, family or with political representatives. In its first year, the WISL program shared a booklet of inaugural chapters with then-Rep. Tammy Baldwin. The chapters continue to serve as an approachable way to share the value of publicly funded research, says Shakhashiri.

Well-known for his national leadership in science policy and science education and for his Science is Fun public engagement work, Shakhashiri hopes the program’s success so far inspires all graduate students to sign on to the challenge of sharing their work widely. That extends beyond the sciences to the arts and humanities.

“Every UW–Madison PhD thesis should have a chapter sharing the joy that the PhD candidate had in their scholarly work,” he says. “Long live the Wisconsin Idea.”