Ten images and two videos by University of Wisconsin–Madison students, faculty and staff have been named winners of the 2019 Cool Science Image Contest.

A panel of eight experienced artists and scientists judged the scientific content and aesthetic and creative qualities of 95 images and videos entered in the ninth annual competition.

“To be able to see things from such a different perspective — so close to the hairs on the leg of an insect, or cells migrating, or all the colors that shine from a mineral if you crack the rock open — can be such a powerful way to understand things that may be mysterious if you’re not working in a lab,” says Kara Rogers, a contest judge and senior editor, biomedical sciences, for Encyclopaedia Britannica. “There are a lot of those surprises, things that make you sit up and say, ‘That’s amazing,’ in the submissions this year.”

The winners — along with a slideshow of all entries — will be on exhibit from Sept. 16 to Dec. 13 in the McPherson Eye Research Institute’s Mandelbaum & Albert Family Vision Gallery on the ninth floor of the Wisconsin Institutes for Medical Research, 1111 Highland Ave. The exhibition opens with a public reception from 4:30 to 6:30 p.m. on Sept. 16. In addition to showing off the striking images of oft-hidden features of the natural world, the reception celebrates five years of art and science exhibits at the gallery. 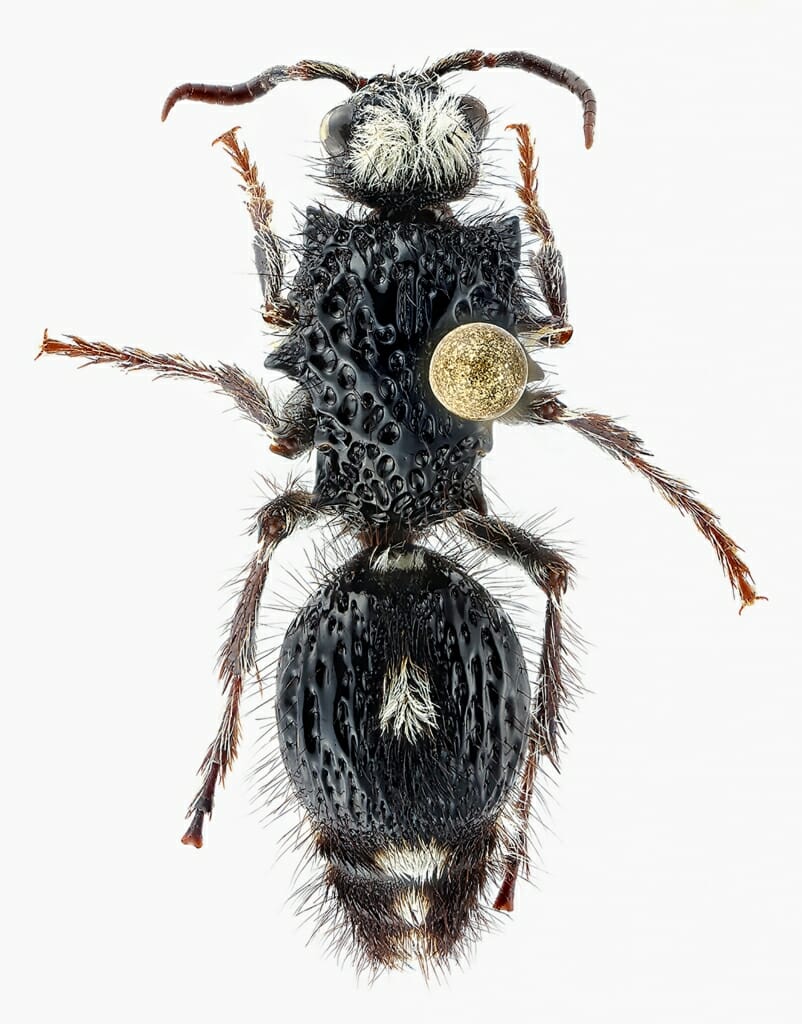 1 Bothriomutilla rugicollis may be an Australian wasp, but members of its family — the Mutillids — are commonly called velvet ants. During their larval development, they live inside an insect host. The moon-like object hovering above this female’s thorax is the head of the pin holding this curated specimen. 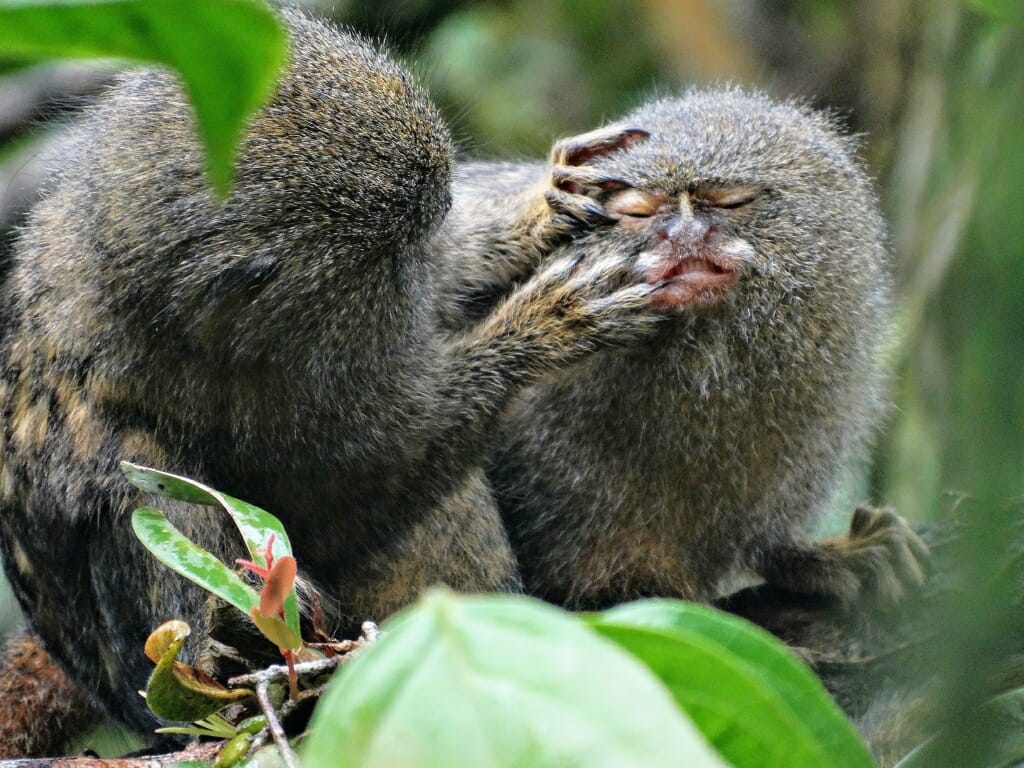 2 Pygmy marmosets are the smallest monkeys in the world. While their pocket-friendly size makes them cute, it also makes them desirable exotic pets and frequently trafficked far from their home range in the Amazon River basin. 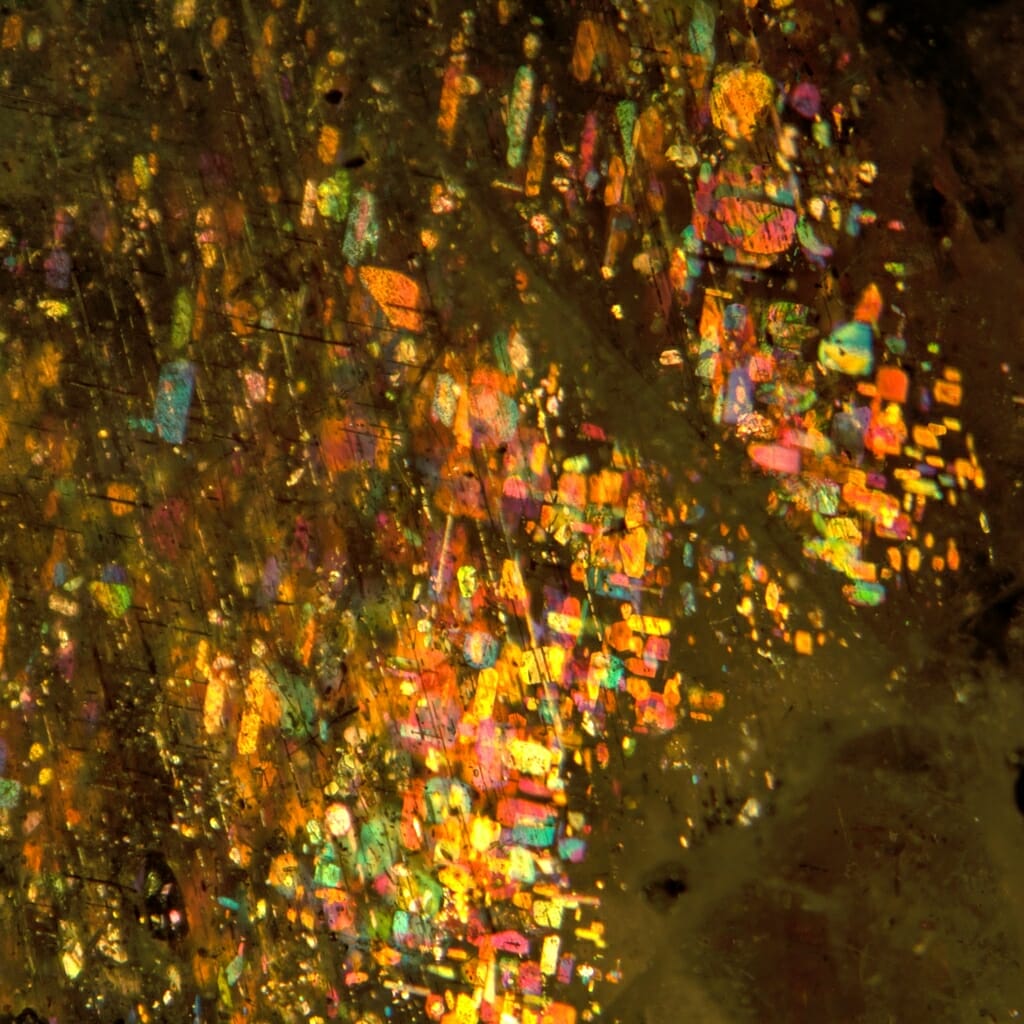 3 Trapped within labradorite feldspar, flaky crystals of the iron ore hematite reflect a range of colors determined by crystal thickness and reminiscent of a painting. Materials — called inclusions — trapped inside minerals as they form can tell geologists about the conditions under which they crystalized. 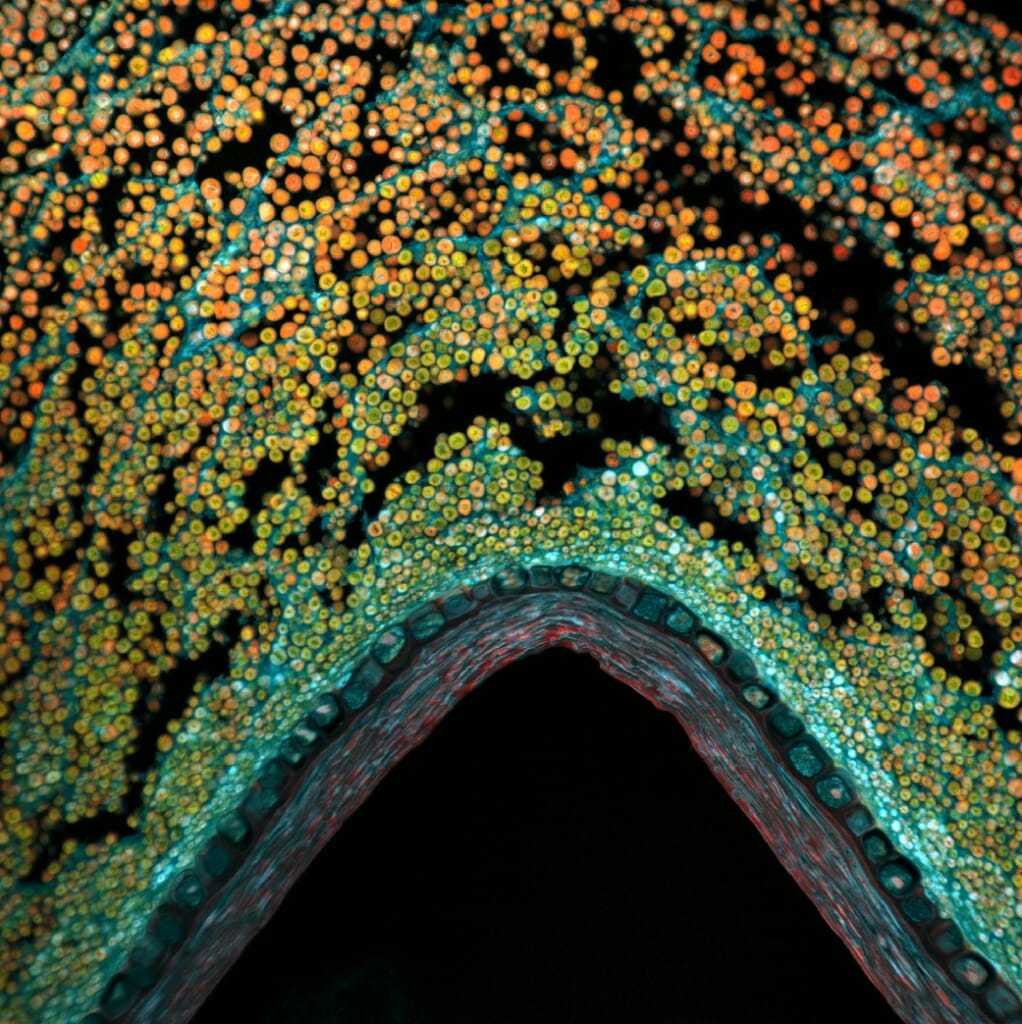 4 In cross-section, a single grain of corn becomes remarkably complex. The germ — the living base of a kernel where the plant’s genetic information resides, pictured here — includes the coleoptile, a sheath that protects an emerging shoot and the first leaves. 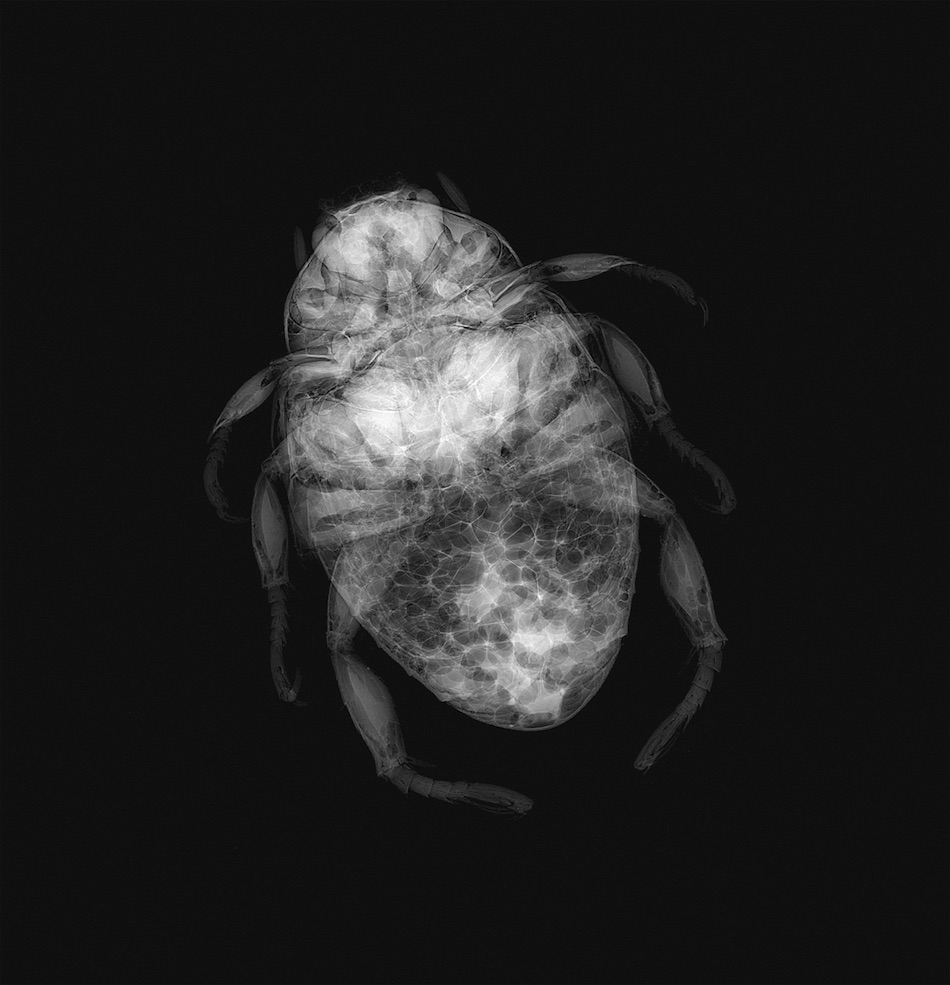 5 Seen in an X-ray, an adult Japanese beetle’s exoskeleton appears as a complex puzzle of sections — not full of eggs, as the team of non-entomologists who produced the image originally thought. The X-ray unit used is an integral part of bone-related studies, but is also sensitive enough to differentiate soft-tissue specimens like invasive backyard pests. 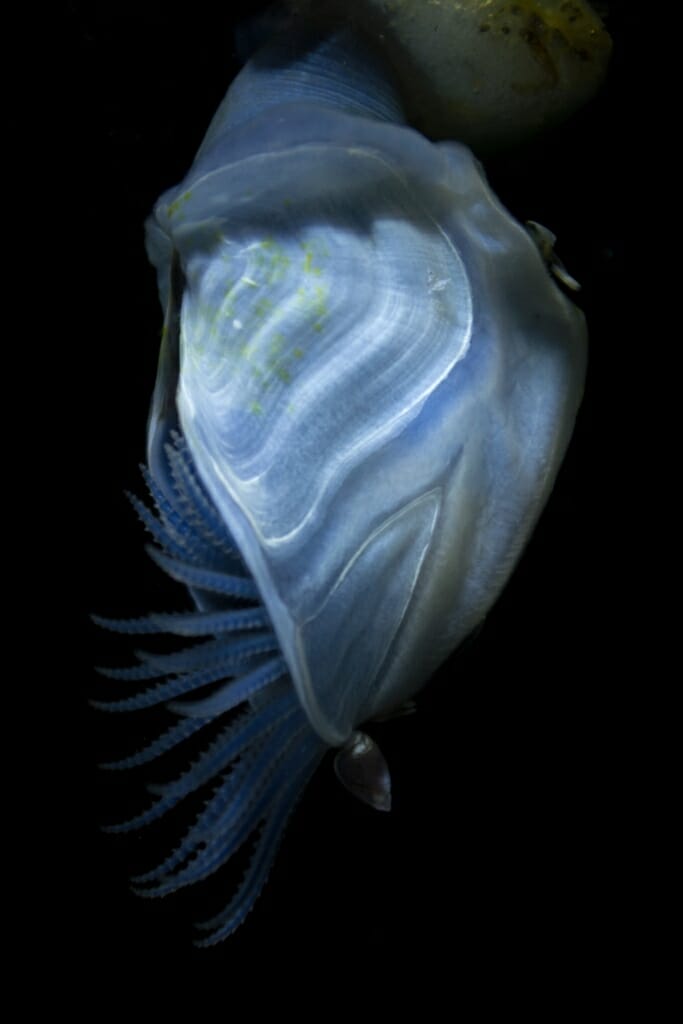 6 This blue buoy barnacle (Dosima fascicularis), found off the Oregon coast, needs no ship hull or whale skin to give it a ride. It is a member of the only barnacle species that produces its own flotation device, a bulb of gas-filled cement (at top) that allows it to travel ocean currents while hanging the appendages of its “foot” out to reach food. 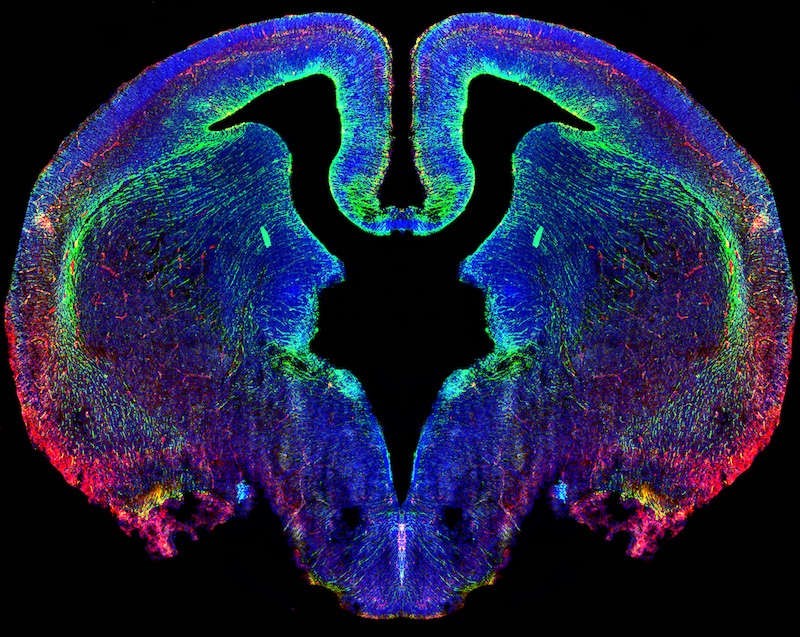 7 The developing brain of a 16-day-old embryonic mouse growing from neural stem cells (stained green) extending into the brain tissue from the edges of the black, fluid-filled ventricle at center. 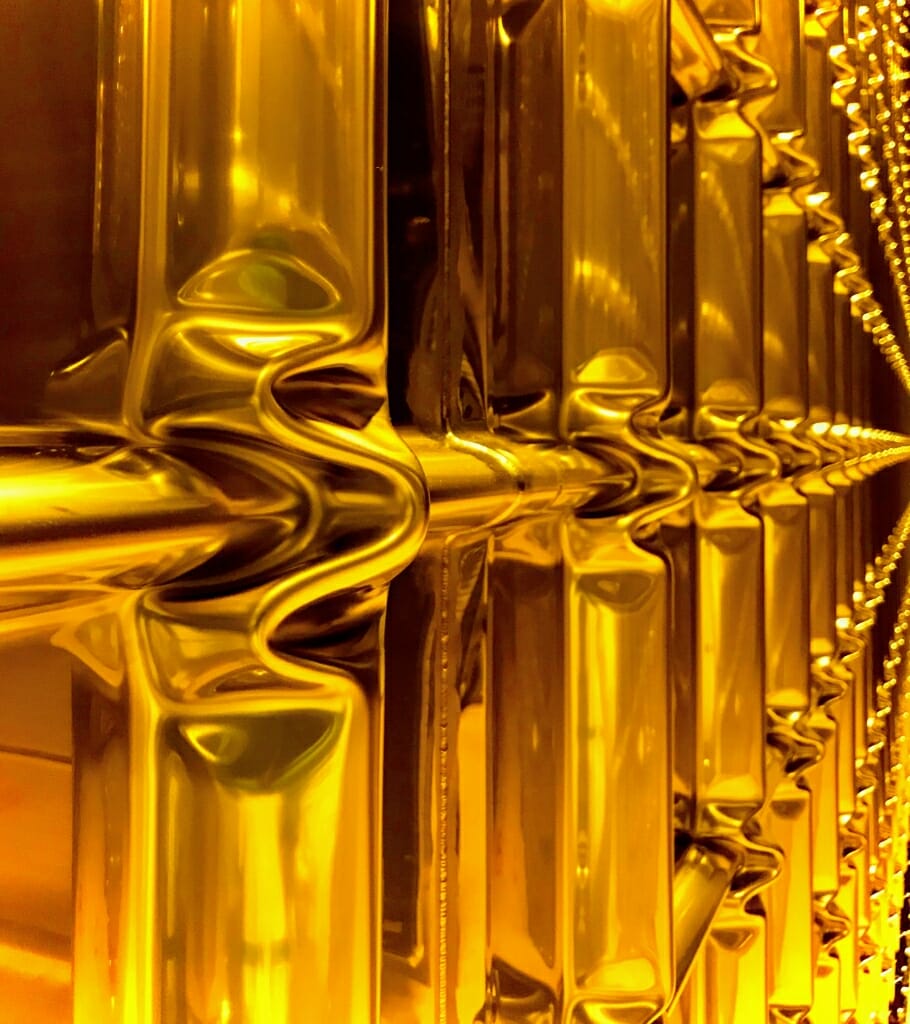 8 The corrugated areas in this stainless steel wall will keep welds from breaking as the vessel is cooled to minus 265 degrees Fahrenheit and filled with 135,000 gallons of liquid argon. The container is a prototype for a neutrino detector that would hold more than 3 million gallons of argon in which neutrino collisions with argon atoms could be carefully studied for clues suggesting why our universe is made of matter. 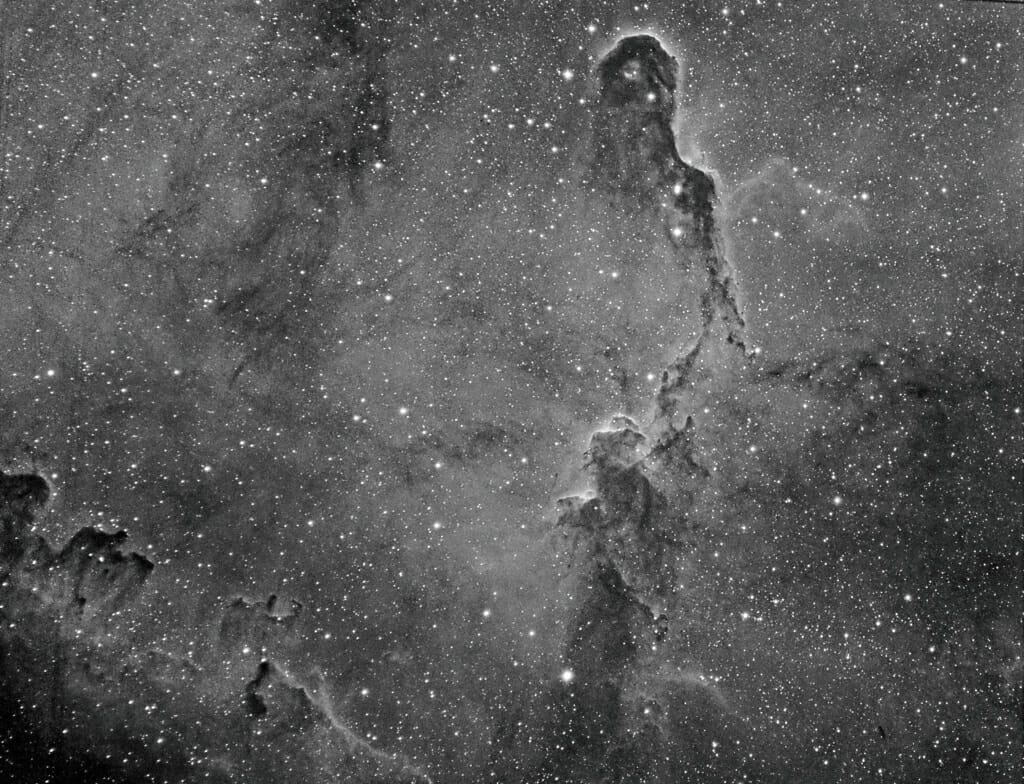 9 The Elephant's Trunk Nebula in the constellation Cephus is part of a large field of star-forming nebulae about 3,000 light years from Earth. Winds flowing out of the young stars born in the nebula sculpted clouds of gas and dust into the curling elephant trunk shape at top. 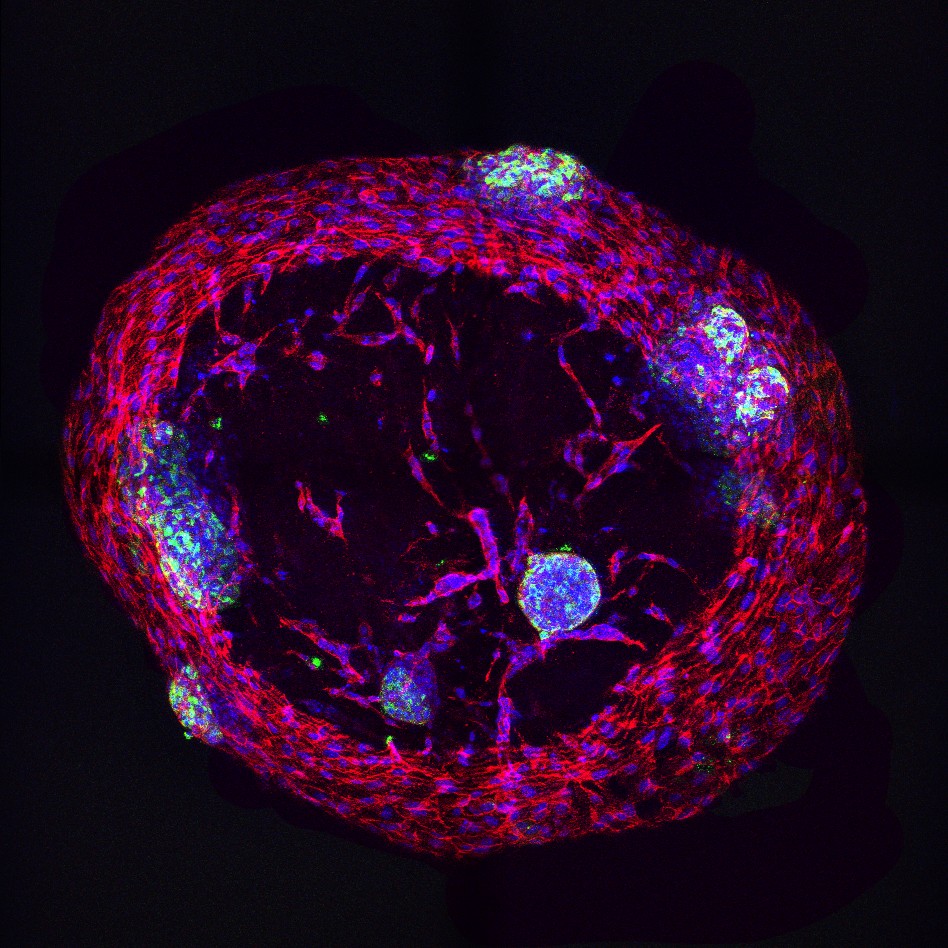 10 Human endothelial cells (red) embedded within a droplet of human pancreatic extracellular matrix hydrogel have begun to form vessel-like tubes which may aid in culture and transportation of islet cells (green). Insulin-producing islets survive only briefly after culturing. Extending their life by culturing them in the gel could improve islet transplant as therapy for diabetes patients.

Computed tomography (CT) scans combine many X-ray images to produce detailed pictures of structures inside the body. The X-ray data is reconstructed into anatomical images in a computer process called filtered back projection. This video is an animation created with artificial data as part of a study examining the way slight changes to filtered back projection parameters can change the resulting image — part of an effort to construct CT scans using a smaller X-ray doses without creating errors that could obscure, say, cancerous tumors.

Waves of proteins cascade across a single frog cell over the course a time-lapse video covering four hours. The patterns arise from feedback loops in the cell as it prepares to divide into two frog cells. Researchers are studying these waves to better understand the mechanisms of cell division.

The 2019 winners span a wide range of technical and scientific expertise. The images were captured with an array of cutting-edge scientific tools, hobbyist telescopes and point-and-shoot digital cameras operated by experts in their scientific fields, trainees and students — and by curious amateurs.

Their subjects are plant, animal, mineral and celestial, and pictured from thousands of light-years off or less than a hair’s breadth away, pinned for study by future generations and even in the process of becoming the next generation.

The Cool Science Image Contest recognizes the technical and creative skills required to capture images or video that document science or nature. The contest is sponsored by Madison’s Promega Corp., with additional support from DoIT Digital Publishing and Printing Services and the UW–Madison Division of the Arts.

Winning entries are shared widely on UW–Madison websites and in public exhibitions, and all entries are showcased in a slide show at the Wisconsin Science Festival and in concert with a fall exhibit of winners at the McPherson Eye Research Institute’s Mandelbaum and Albert Family Vision Gallery.

Craig Brabant, curator of the Wisconsin Insect Research Collection, for a photo of a pinned specimen of a wasp from a family of wasps commonly known as velvet ants.

Irene Duch-Latorre, graduate student in the Department of Anthropology, for her image of a pair of pygmy marmosets captured grooming each other in a tree.

Shiyun Jin, graduate student in the Department of Geosciences, for his image of the rainbow of colors reflected by microscopic flakes of hematite trapped in a dark crystal of labradorite feldspar.

Elle Kielar-Grevstad, director of the Biochemistry Optical Core, for a microscope image of the coleoptile — the protective sheath covering what would become an emerging shoot and first leaves — in a kernel of corn.

Ellen Leiferman, researcher, and Matthew Halanski, associate professor, in the Department of Orthopedics, and Ashley Weichmann, instrumentation specialist at the UW Carbone Cancer Center, for their X-ray of a common invasive insect, the Japanese beetle.

Ani Michaud, graduate student in Cell and Molecular Biology, for her image of a blue buoy barnacle, a crustacean that makes its own floatation device for sailing ocean currents.

Daniel Z. Radecki, postdoctoral researcher in the Department of Comparative Biosciences, School of Veterinary Medicine, for his image of stem cells in the developing brain of a 16-day-old mouse embryo.

Brian Rebel, professor in the Department of Physics, for a photo of the corrugated steel wall of a vessel that will hold 135,000 gallons of liquid argon at minus 235 degrees Fahrenheit in a pilot neutrino detection project.

Jeffrey E. Shokler, associate director of the Office of Undergraduate Advising, for his photo of the Elephant’s Trunk Nebula.

Dan Tremmel, graduate student, and Vansh Jain, undergraduate student, both in the Department of Surgery, for their image of insulin-producing cells growing in a gel designed to keep them healthy for transplant into diabetes patients.

Dalton Griner, graduate student in the Department of Medical Physics, for an animation of X-ray data made while studying the process of constructing CT scan images.

Ani Michaud, graduate student in Cell and Molecular Biology, and Jiaye “Henry” He, graduate student in the Department of Integrative Biology and Morgridge Institute for Research, for their video depicting waves of proteins undulating throughout a single frog cell preparing to divide into two frog cells.