The band’s together again!

On a blustery gray Wednesday afternoon, about 200 student musicians got the chance they’d been waiting a year for – the chance to be a band again.

The UW–Madison Varsity Band gathered for the first large group practices since the COVID-19 lockdown began. Flashing green Badger Badges to show they were in compliance with campus health rules, they lined up on the practice field – carefully distanced, with bell covers to limit the airflow from their instruments and two masks (one regular and one with a small slit, for playing).

“It’s been a while since I’ve seen this many people in the same place with instruments. So I’m grateful,” said Corey Pompey, the director of athletic bands. “Let’s move some air!” he exclaimed, starting a warmup exercise. “Faster, faster! I want to hear more air moving!”

The band suspended practice last March for what members expected would be just a short hiatus – in no time, they thought, they’d be at the Kohl Center performing their annual spring concert. Instead, it’s been a year of rehearsals via Zoom and in small groups of the same instrument. Now, at last, they were together – trumpets, trombones, clarinets, saxophones, mellophones, euphoniums, flugelhorns, drums, cymbals and of course the tubas. It wasn’t quite the entire band – students split into two groups, each practicing for an hour, and some members who are studying remotely weren’t able to join – but it was a start.

When the first three notes of the warmup sounded a little tentative, Pompey gently chided, “I realize it’s been a long time since we’ve been together but surely we can produce a bigger sound than that!” The musicians responded instantly with fuller sound.

“More brass! More brass!” urged Pompey, perched atop a ladder, coatless despite the chill. “Tubas, let me hear a B flat. And hopefully it’s the same B flat from all of you.” 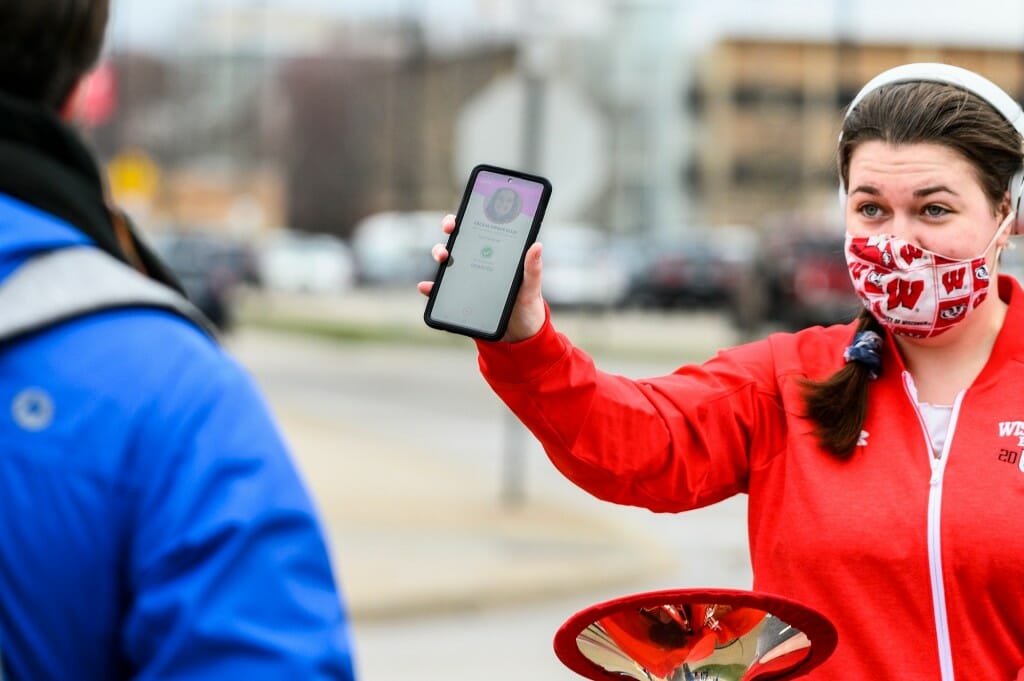 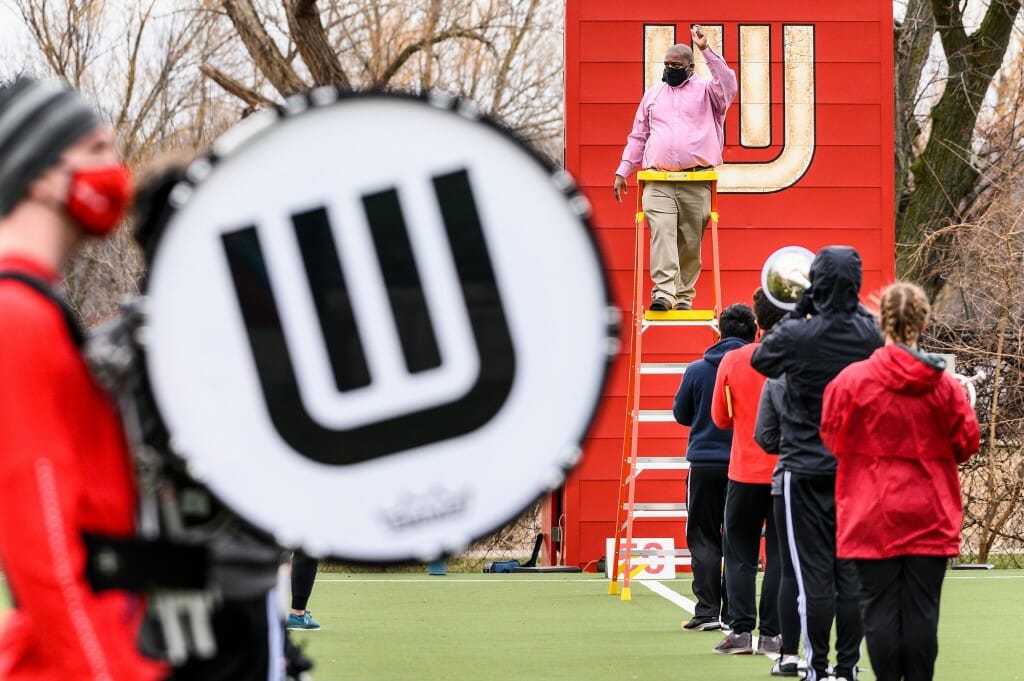 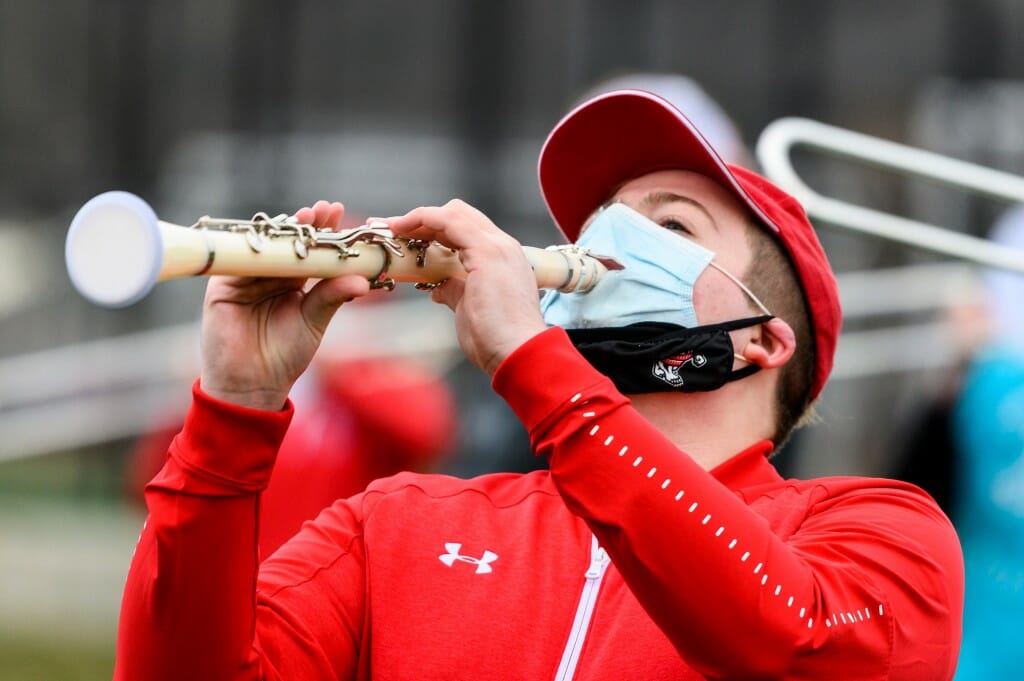 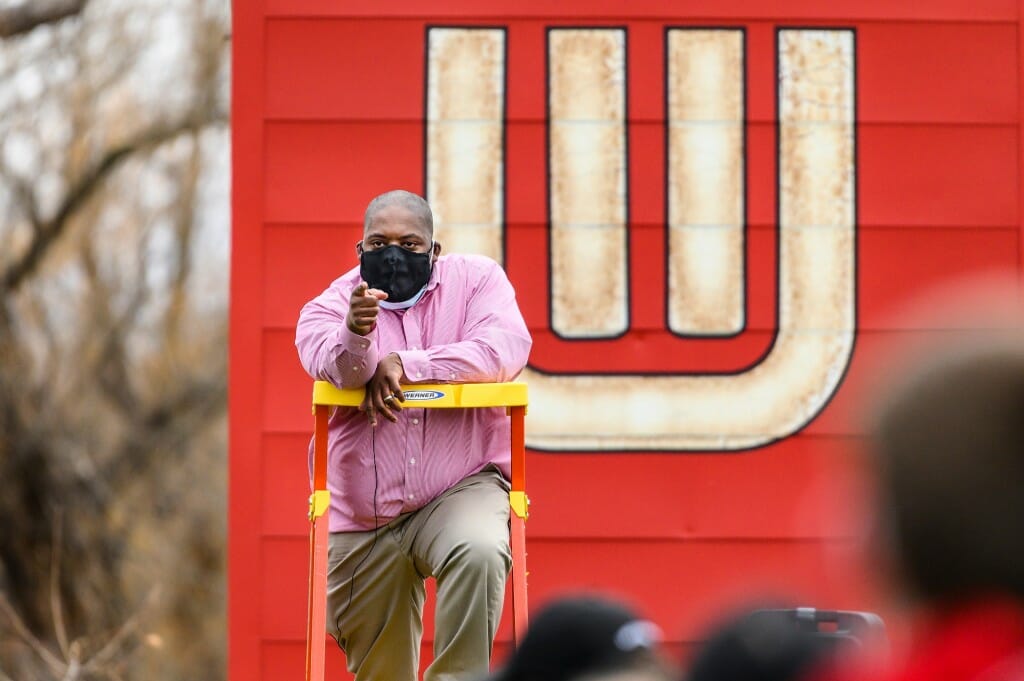 Pompey and the band fill the spring air with peppy music. Photo by: Jeff Miller 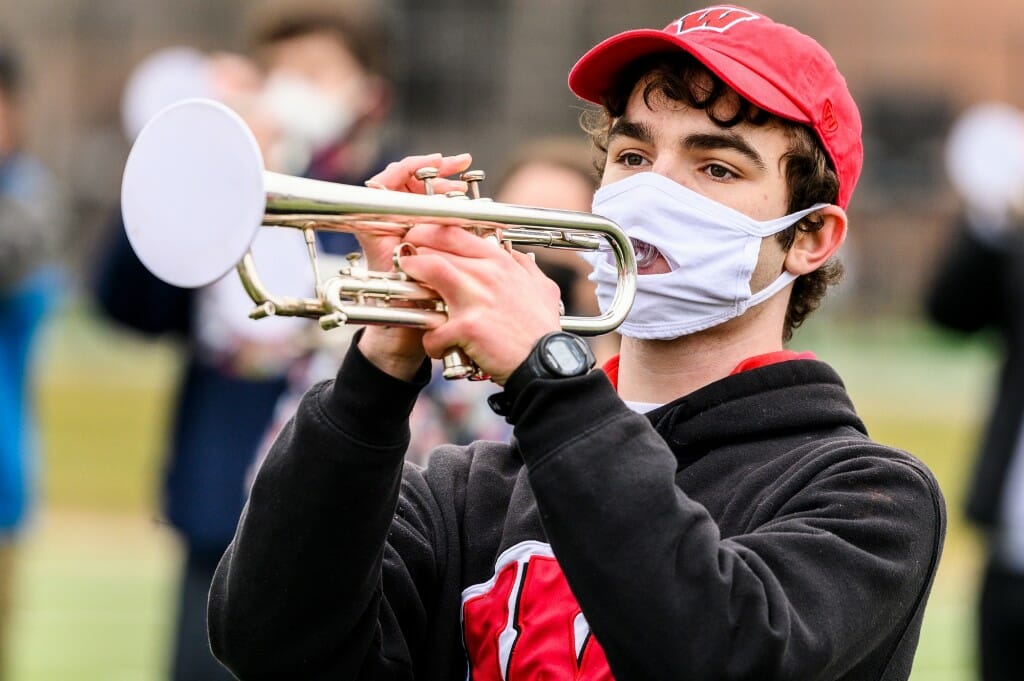 Sophomore Mark Damkot wears a slitted face mask and plays his instrument with a cover on the bell. Band members followed safety protocols as they held their first large-group practice since the pandemic started. Photo by: Jeff Miller 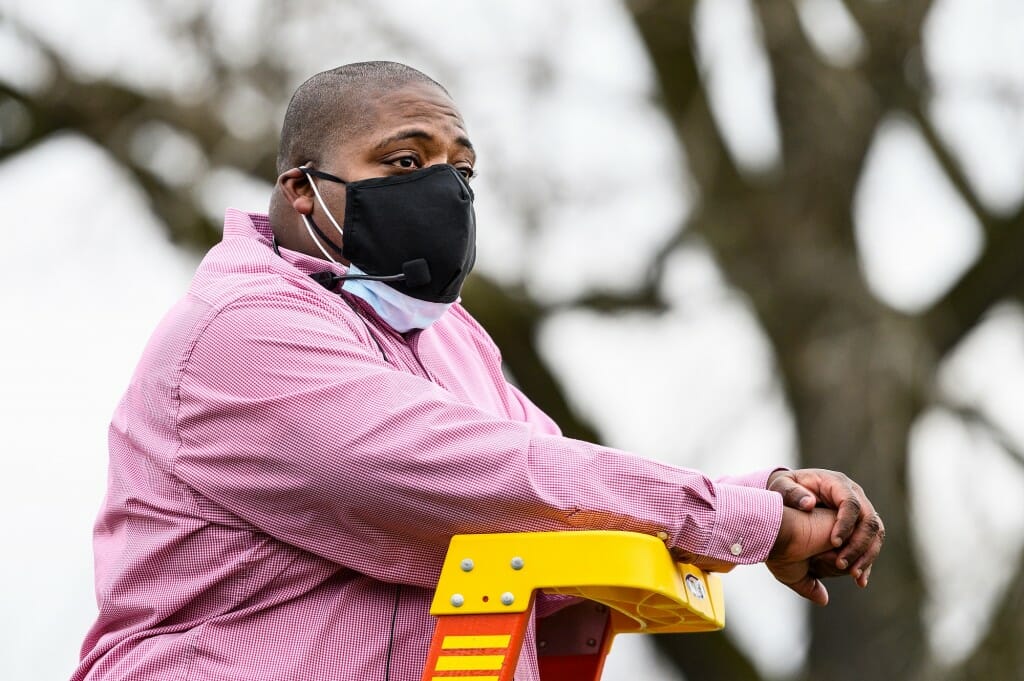 Corey Pompey, director of athletic bands, talks to the band about the challenges of the past year and goals for the coming season. Photo by: Jeff Miller 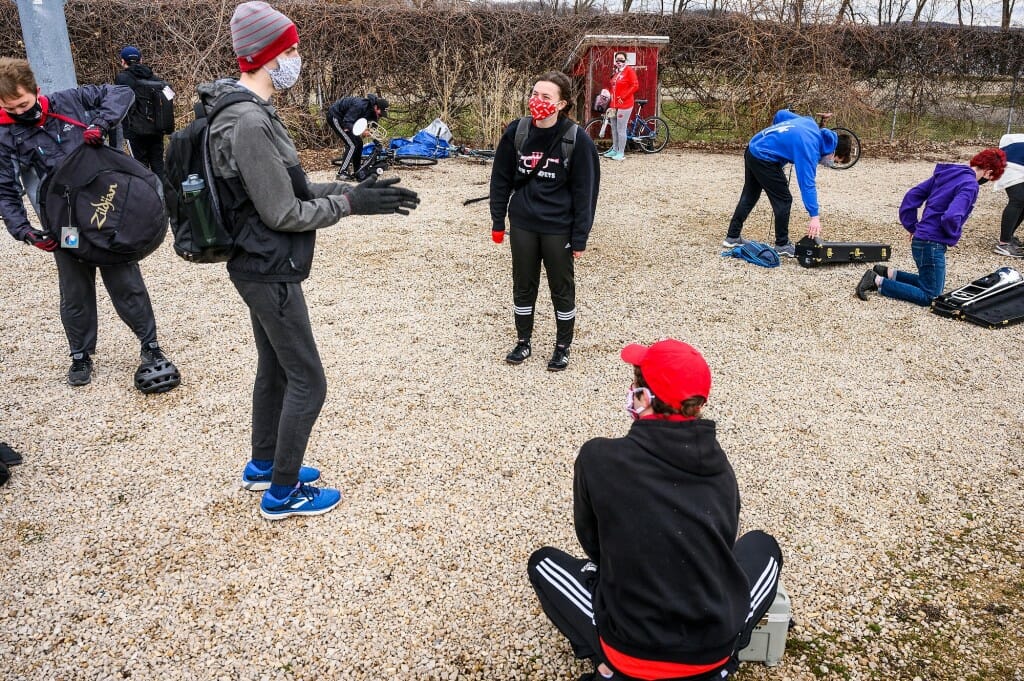 Band members chat after practice, happy to be back together. Photo by: Jeff Miller 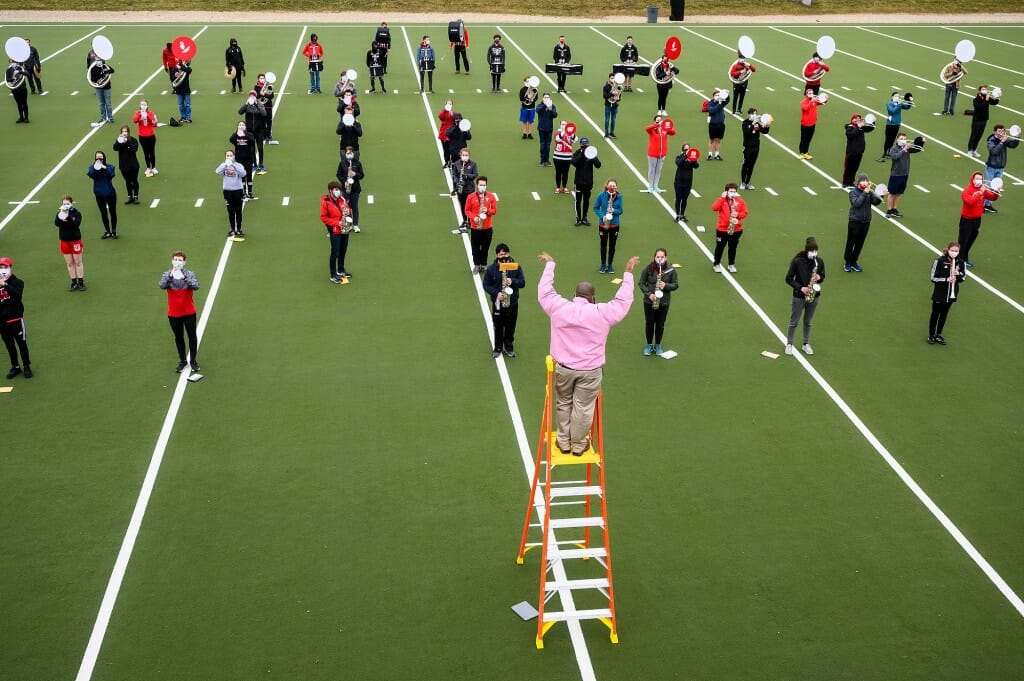 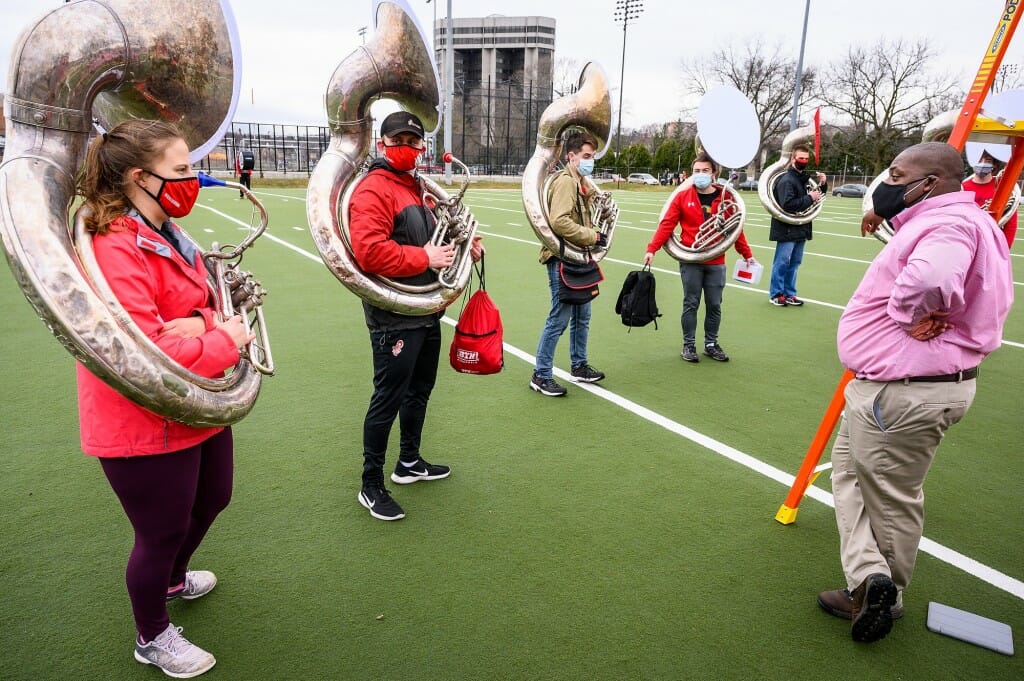 Then it was time to try “Varsity,” the tune that closes every sporting event and celebration. The first note started… and stopped. “Woof! Try it again!” Pompey said. A few more starts and stops and the band began to hit its stride. “Nice, beautiful sound,” Pompey said. “Oh! You sound good!”

They moved through all the favorites – “On, Wisconsin,” “If You Want to Be a Badger,” “A Hot Time in the Old Town Tonight,” “The Horse” – Pompey’s ladder quivering as he stomped his foot.

It’s not yet known when the band will perform for fans again at venues like Camp Randall and Union South’s Badger Bash. On this day, just a few people were nearby to enjoy the music. Kaysi McGhie, a pharmacy instructor at UW Hospital, and her 3-year-old son Leo were passing by and Leo got so excited by the sight of the band that they took a detour, pausing to listen and dance.

Katy Jurgella, a senior trumpet player from Middleton, thought this practice might make her a little sad because the full group wouldn’t be together. “Now that I’m here, I’m very excited,” she said. She hadn’t played in public since the Rose Bowl in January 2020.

Jurgella lives in a house with seven of her fellow trumpet players and said that helped her maintain a sense of community through a challenging time.

For some, the practice was about more than music. “It’s definitely a sign of what’s to come, just around the corner,” said Zachary Bethel, a teaching assistant with the band. “The light is at the end of the tunnel.”

As the practice wound to close, Pompey urged students to keep up the safety precautions that have limited the spread of COVID-19 and allowed practice to resume.

“This is a really, really momentous occasion and the hope is that we don’t go backwards – we keep moving forward,” he said. “It’s good to see you, everybody. I can’t wait to do it again.”

Drum major Josh Richlen of Greendale stepped up to lead the band in its slogan of the day.

“Eat a rock!” the students shouted. “It’s good to be back! On, Wisconsin!”