It has been a full five decades since the University of Wisconsin–Madison’s Mead Witter School of Music has selected a new leader of the UW Marching Band. 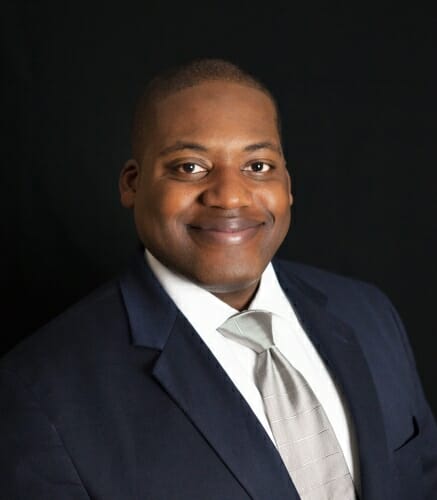 “Corey Pompey is the clear choice,” said Susan Cook, director of the School of Music. “He has a deep musicianship along with an enthusiasm and energy on the podium that was infectious; he really connected with the students.”

“When I think of UW, I think of a great institution of learning,” said Pompey. “The second thing I think of is its wonderful tradition of marching bands. There’s a strong legacy at UW.”

Interestingly, Pompey didn’t initially set out to become a band leader. He began his career teaching music in public schools in Pleasant Grove and Brookwood, Alabama.

“I went into music education with the intent of doing something else with my life,” Pompey said. “Then the music grabbed me. The profession found me – I didn’t find it.”

In discussing the vision he’ll bring to his new role with the UW Marching Band, Pompey emphasized the importance of collaboration, music selection and the student experience.

“It’s important to be entertaining the crowd, always,” he said. “But I also want to provide the students in the band with a great experience. I want them to learn something.”

The UW students who participated in the interview process were also impressed with Pompey. CJ Zabat, a 22-year old senior who serves as the band’s drum major, said he and his fellow band members felt an instant connection.

“He was really deliberate, knowledgeable and detail-oriented,” Zabat said. “He was aware of everyone in the room with him, and it was clear there were a lot of musical gears turning in his head.”

Pompey is also mindful of the deep tradition and national profile of the program he’s inheriting from Leckrone, who has led the band since 1969. Last fall, Leckrone announced his intent to step down as director at the end of this academic year.

“I want to acknowledge how honored I am to have the opportunity to lead this program,” Pompey said.  “I also want to thank Prof. Leckrone for all he’s done. I look forward to carrying on the excellence of the program.”

Pompey will officially start at UW on July 20.