Thanks to science, parasite can have sex in mice, not just cats 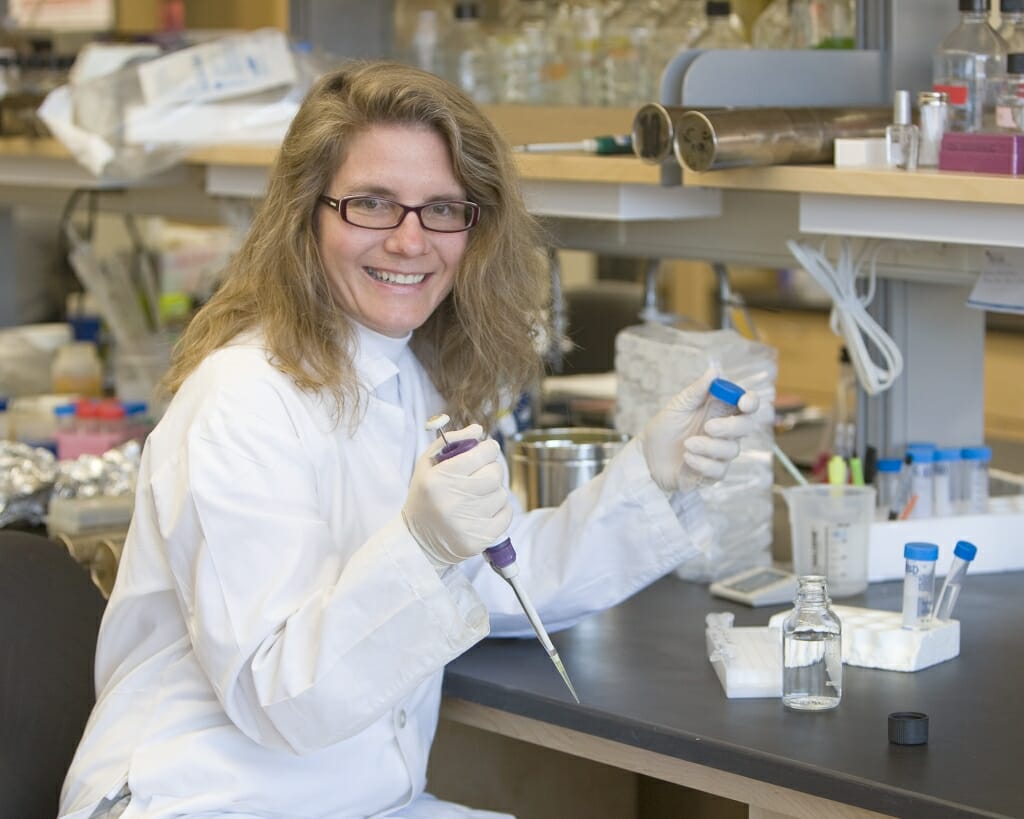 Laura Knoll is a professor of medical microbiology in the UW School of Medicine and Public Health. Photo by Wandy Beatty/Washington University

Toxoplasma gondii, a single-celled parasite perhaps best known for its ability to trick mice into taking potentially fatal risks around cats and, in humans, as a serious threat to fetal health, has given up a long-held secret of its reproduction.

In a study now online in the journal Public Library of Science Biology a team of researchers from the University of Wisconsin–Madison peels back the mystery of why the parasite, which infects a wide range of mammals, including humans, can only have sex and reproduce in the intestines of cats. The work could lead to a vaccine for cats and throws a critical lifeline to scientists who study the parasite by providing a new animal model in which to study it.

“We really have been limited in studying the sexual cycle of Toxo,” says Laura Knoll, the senior author of the new study and a professor of medical microbiology in the UW School of Medicine and Public Health. 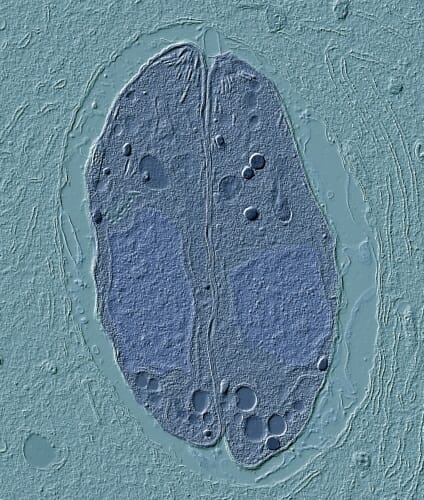 A micrograph of Toxoplasma gondii, a single-celled parasite that infects many animals, including humans. The organism is best known as a threat to human fetal health and as a mind-altering agent in mice that makes the rodents attracted to cat urine. A new study from the lab of UW–Madison’s Laura Knoll shows why the parasite can only reproduce in cats, opening the door to a vaccine for cats and a new animal model in which to study the pathogen. Photo by Laura Knoll

Toxoplasma gondii, or Toxo in shorthand, is ubiquitous in the environment. Nearly one-third of the human population is chronically infected. Most people acquire Toxo through the consumption of undercooked meat, or water contaminated with cat waste. Humans can also get infected by handling cat litter, although simple exposure to cats themselves is not a known risk for infection. Pregnant women are advised against handling cat litter, as infection in the mother can be transmitted to the fetus with potentially fatal or serious developmental consequences.

But most people never know that they are infected as the parasite, although it resides in the brain, seems harmless to humans outside of the womb. “We’re a dead-end host,” says Knoll, noting that the parasite mostly resides in axons, the threadlike part of nerve cells that conduct impulses between cells. “It really isn’t a problem in people. I have it.”

However, if you are an infected mouse or rat, Toxo has a mind-controlling effect that makes the rodents less inhibited by the odor of cat urine, a potentially fatal attraction that helps the parasite infect new cat hosts.

Like many parasites, Toxo has different life styles in different animal hosts. In most, including humans, the parasite is asexual, unable to produce the spores or oocysts that make new Toxo. However, in cat intestines, for previously unknown reasons, the parasite has sex like crazy and makes oocysts, which are shed by the tens of thousands in cat feces. Why Toxo is only able to reproduce in the feline intestine has been an enduring mystery.

Knoll and her colleagues, including lead author Bruno Martorelli Di Genova, a UW–Madison post-doctoral fellow, and collaborators Sarah Wilson and J.P. Dubey, solved the riddle when they tried to rear the parasite on cat intestinal cells in culture. Their efforts to grow the parasite to its sexual stage failed. Suspecting a missing nutrient, they added linoleic acid, an essential fatty acid that Toxo is known to scavenge in its hosts.

In the intestines of people and most other animals, linoleic acid is metabolized with the help of an enzyme known as delta-6-desaturase or D6D. Felines, it turns out, are the only mammals that lack D6D activity in their intestines, providing an environment rich in linoleic acid, which apparently is the molecular key that helps Toxo achieve sexual maturity.

Knoll speculates that because cats evolved in a desert environment and to compensate for scarce food resources they ramped down production of D6D. “They basically shut off expression of this enzyme so all their lipids go into energy,” Knoll says.

Working in mice, Knoll’s team used an inhibitor to suppress the D6D enzyme and supplemented the mouse diet with linoleic acid, thereby achieving Toxo sex in a rodent model. Importantly, the treated rodents poop out Toxo oocysts, just like cats although not as many, providing an alternative laboratory model to study Toxo.

The new model is now critically important as the USDA laboratory that supplied Knoll’s team with the cat feces they needed for their work was shut down after anti-research activists pressured Congress. “This work wouldn’t have been possible without cat poop,” says Knoll, of the cat waste rich in Toxo oocysts. “I needed cat shit.”

While promising, the approach used by Knoll is not practical for many labs because the drug used to tamp down the linoleic acid metabolizing D6D enzyme is costly, on the order of $300 per mouse. “That’s not something most labs are able to do,” says the Wisconsin researcher. “And the mouse doesn’t poop out as many oocysts as a cat.”

Knoll hopes to address part of the issue by using CRISPR technology to make a knockout mouse that does not produce the D6D enzyme in its intestines. “We’ll basically be making a cat-mouse,” says Knoll. “It will help get around the issue of cost.”

However, developing the new mouse model will take at least a year, meaning research on the parasite and ways to control it in people and animals will be stalled. And that is worrisome, Knoll adds, as a new strain of Toxo recently emerged in an outbreak in Brazil, and unlike the familiar strains of Toxo, the new strains emerging in South America seem to be having direct health effects on their human hosts, including the blinding disease retinitis and disorders of the nervous system.