Curiosities: How big is space?

Space is probably infinite, but we can see only the part that contains stars or galaxies whose light has been able to reach us, says…

Susan N. Coppersmith, a University of Wisconsin–Madison professor of physics, was elected to the prestigious National Academy of Sciences today (April 28), in recognition of her "distinguished and continuing achievements in original research."

As the 2008-09 Antarctic drilling season concludes, the IceCube Neutrino Observatory is on track to be finished as planned in 2011.

Four members of the University of Wisconsin–Madison faculty are among 118 scientists, mathematicians and economists from around the country who have been awarded prestigious Alfred P. Sloan Research Fellowships. 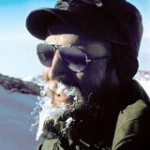 Fifty years ago, UW scientist Charlie Bentley made his maiden voyage to a frigid, faraway land – and he’s been returning ever since.

The teeth and bones of mammals, the protective shells of mollusks, and the needle-sharp spines of sea urchins and other marine creatures are made-from-scratch wonders of nature.

Heart of the Matter

Underground in Europe, thousands of scientists — using the largest accelerator ever built — are conducting a thrilling hunt. They’re looking for tiny particles that are the source of all matter’s mass, hoping to solve some of the biggest mysteries in physics. And UW–Madison researchers are right at the center of the action.

After more than 15 years of planning and preparation, the Large Hadron Collider (LHC), the world's most powerful particle accelerator, started operating this morning (Sept. 10).

Curiosities: What’s behind the claims that the new particle accelerator in Europe may create black holes that could destroy the Earth? Should we be worried?

When the Large Hadron Collider starts running this summer near Geneva, Switzerland, some physicists have predicted that some of its high-energy proton collisions could…

This week marks the annual "Driller and Deployer Workshop" for research staff who will work at the South Pole as part of the well-known IceCube Neutrino Observatory project.

A number of graduate programs and specialties at UW–Madison scored high marks in the 2009 "Best Graduate Schools" edition of U.S. News and World Report.

When the world's most powerful particle accelerator starts up later this year, exotic new particles may offer a glimpse of the existence and shapes of extra dimensions.

Physics professor Marshall Onellion has a new job title this semester: official tackling dummy for his freshmen students. It’s part of his scheme to provoke controversial discussion and to get his students really thinking. Oddly enough, he’s instigating this debate in a physics class.

While the shiny material of pearls and abalone shells has long been prized for its iridescence and aesthetic value in jewelry and decorations, scientists admire mother-of-pearl for other physical properties as well.

Peering backward in time to an instant after the big bang, physicists at the University of Wisconsin–Madison have devised an approach that may help unlock the hidden shapes of alternate dimensions of the universe.

A working quantum computer could be so powerful that it would solve in seconds certain problems that would take the fastest existing supercomputer millions of years to complete. Seeking this 'Holy Grail' of computing power, an interdisciplinary team of engineering and physics researchers at the university plans to use silicon germanium quantum dots to build the foundation for a new generation of computers.

With a lab full of lasers to corral and chill atoms, physicist Thad Walker is plunging into the frigid domain of "absolute zero." It's not just cold there. It's weird.