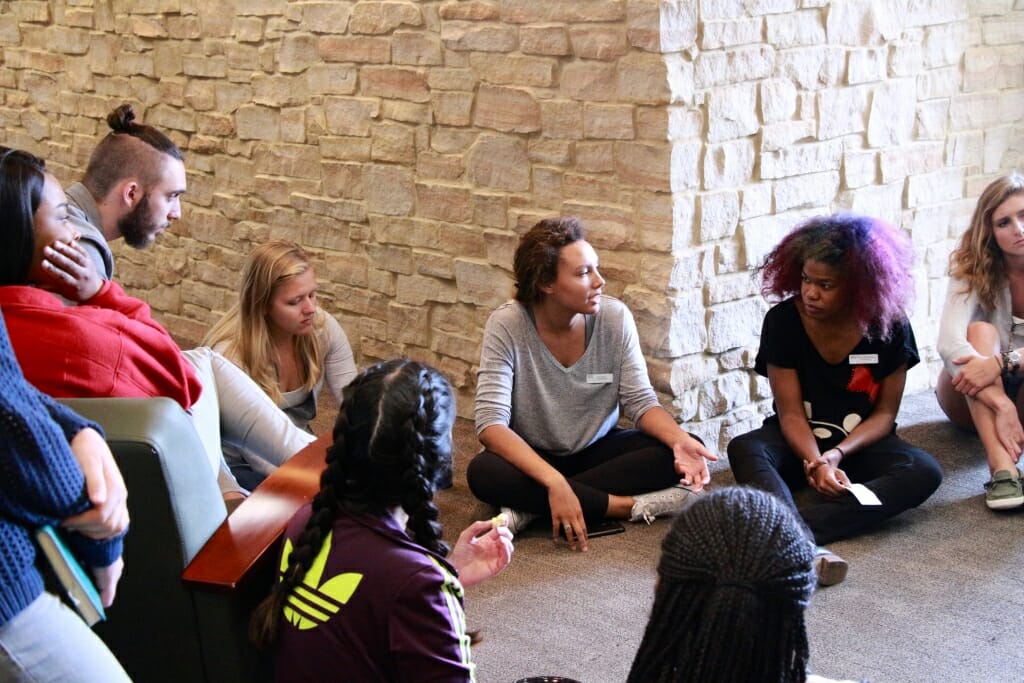 Facilitators are trained for the Our Wisconsin inclusion program in August 2017. UW-Madison

In its second year, the Our Wisconsin inclusion program at UW–Madison expanded four-fold to 4,332 students, and survey results suggest it is increasing awareness of and respect for diversity on campus.

The program, piloted to 1,000 students in the fall of 2016, aims to promote community among incoming students and increase knowledge about cultural differences. Workshops feature structured dialogue, activities and reflection. Student facilitators co-lead the workshops with a staff or faculty member.

This year, all 7,500 students living in residence halls were given the opportunity to attend one of the program’s three-hour workshops during their first weeks on campus. Nearly 60 percent participated.

“In just its second year, Our Wisconsin has demonstrated a positive impact on campus culture,” says Kevin Helmkamp, associate dean of students. “Although we are in the early stages of the effort, there is certainly reason for optimism.”

Our Wisconsin is a program of the Center for the First-Year Experience, part of the Division of Student Life. Participants this year were surveyed at the start of each workshop and again at the end. Every post-workshop measure showed growth:

“The survey results show widespread desire on the part of student participants to seek out and understand fellow students who have different identities than themselves,” Helmkamp says. “This demonstrates both support for the effort and an affirmation of the goals of Our Wisconsin, which we fully stand behind as a division and campus.”

Participants also said they came away with a greater appreciation for how social identities influence the way people view the world, and they gave the program itself high marks — 88 percent said they think it positively contributes to the campus community. Full data can be found in the newly released executive summary.

The report shows 134 workshops were held in the fall of 2017, up from 59 the pilot year. Ninety-six trained facilitators led the workshops.

Aaric Guerriero, who oversees Our Wisconsin as program director for inclusion education, and Tristen Johnson, program coordinator for Our Wisconsin, are busy this semester preparing for fall. The plan is for the workshops to again be offered to all students in residence halls, Guerriero says. The vast majority of residents in the halls are freshmen.

Guerriero and Johnson joined UW–Madison last summer, at the completion of the program’s pilot year.

“Now that Tristen and I have both gone through one iteration of the program, we have ideas of how we want the program to grow and what we want it to look like,” Guerriero says. “We’re being very intentional about going through the curriculum and looking at the data we collected from the participants and the facilitators. We are identifying the aspects of the program they like and those they’re not as crazy about, and deciding how we can adjust the program to facilitate those changes.”

For more information about Our Wisconsin, visit the website or email the program at ourwisc@studentlife.wisc.edu.