Study evaluates accuracy of tests for Bartonella infection in dogs

A study led by University of Wisconsin–Madison School of Veterinary Medicine Clinical Assistant Professor Erin Lashnits provides new insights into how best to diagnose Bartonella infection in dogs, a common flea-borne disease that is linked to heart infection, organ inflammation, and other ailments.

The researchers evaluated the clinical accuracy of six different diagnostic tests for Bartonella infection in dogs. They found that the most commonly used tests had very low sensitivity, which can lead to false negative results. At the same time, a less common test method was highly accurate. 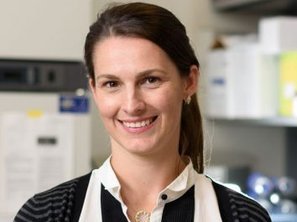 The results, published in June in the journal Pathogens, could help improve diagnostic techniques applicable to both companion animals and people, as definitively diagnosing Bartonella infection in veterinary and human patients remains challenging. Lashnits says the findings address “a big open question in veterinary medicine.”

There is currently no gold standard test for Bartonella in dogs, nor was there previously an accurate estimate of the clinical sensitivity and specificity of many of these tests. These limitations have made it challenging for veterinary medical clinicians to critically interpret test results, for epidemiologists to draw appropriate conclusions about population-wide trends around Bartonella infection in dogs, or for scientists to explain modes and routes of transmission.

“A clear understanding of the accuracy of commonly used tests for Bartonella has been a big gap in diagnostics,” says Lashnits, a veterinarian board certified in small animal internal medicine. “The lack of a gold standard test limits our ability in the veterinary field to accurately estimate the incidence or prevalence of Bartonella infection in dogs.”

Bartonella bacteria are historically associated with cat-scratch disease, though that is only one of many acute or chronic conditions caused by numerous species of Bartonella. The bacteria are found worldwide in both people and animals. Animals can become infected with Bartonella via exposure to fleas and potentially ticks, which are natural vectors of the bacteria, or through exposure to free-roaming cats or wildlife and the fleas those animals may carry.

For this retrospective study, the research team compared the results of Bartonella diagnostic tests in banked clinical specimens from 90 dogs with naturally occurring hemangiosarcoma, a cancer of the blood vessels. They used two different methods to analyze how different tests performed on two key metrics: sensitivity and specificity.

The results could help improve diagnostic techniques applicable to both companion animals and people, addressing “a big open question in veterinary medicine.”

The researchers found that performing quantitative polymerase chain reaction (qPCR) — a lab technique that detects specific DNA molecules, in this case Bartonella genes — on fresh-frozen tissue biopsy samples provided the highest diagnostic accuracy, with high sensitivity and specificity. This is an important discovery, Lashnits notes, because this is not a sample type that clinicians would otherwise routinely submit.

Conversely, blood qPCR and indirect fluorescent antibody (IFA) tests, which are used commonly by veterinarians to diagnose Bartonella infection, had extremely low sensitivity with only moderate specificity. Low sensitivity means the tests are more likely to provide false negative results, even when dogs really are infected.

The team would like to conduct a similar analysis of the diagnostic accuracy of Bartonella tests used in human medicine. While some diagnostic tests are well studied in certain manifestations of bartonellosis in people, uncertainty remains regarding the accuracy of other tests, particularly in patients with chronic symptoms and atypical disease presentations.

The most well-described presentation in dogs is endocarditis, an infection of a heart valve. Bartonella is estimated to account for 15 to 30 percent of all cases of endocarditis in dogs. Bartonella infection in dogs can also lead to inflammation in various organs, especially the liver and lymph nodes, and more rare diseases of the blood vessels. There is also some evidence that infection is linked to hemangiosarcoma, the disease affecting dogs in the new study, which Lashnits is currently investigating in collaboration with researchers at North Carolina State University.

“Ultimately, if we can use these diagnostic techniques to diagnose and treat Bartonella infection early, we may be able to prevent poorly understood consequences of chronic infection in both dogs and humans,” Lashnits says.

Earlier this year, Lashnits also published research showing evidence of Bartonella infection in the blood of people with schizophrenia and schizoaffective disorder. The researchers plan to proceed with a larger study to see whether those preliminary results are borne out.

This work was supported in part by the American Kennel Club Canine Health Foundation (CHF Grant No. 2550).