In an effort to improve gene transfer to treat the blinding disease glaucoma, the front of an untreated eye (left) is compared to an eye (right) pretreated with a gene delivery enhancer. The green marker reveals the expression of a new gene in the trabecular meshwork, which drains fluid from the eye and is usually blocked in glaucoma. The green band resulting from gene transfer is denser and wider in the enhancer-treated eye. Curtis Brandt/Paul Kaufman, University of Wisconsin–Madison

While testing genes to treat glaucoma by reducing pressure inside the eye, University of Wisconsin–Madison scientists stumbled onto a problem: They had trouble getting efficient gene delivery to the cells that act like drains to control fluid pressure in the eye.

Genes can’t work until they enter a cell.

Glaucoma, one of the most common blinding diseases, is caused by excess pressure inside the eye, usually due to a clog in the fluid drain. “Most glaucoma can be treated with daily drug treatment,” says Paul Kaufman, professor of ophthalmology and visual sciences at the University of Wisconsin–Madison. “Replacement genes could, theoretically, restore normal fluid flow for years on end, without requiring daily self-administration of eye drops that is inconvenient and may have local or even systemic side effects.”

In a study published today in the scientific journal Investigative Ophthalmology and Visual Science, Kaufman and Curtis Brandt, a fellow professor of ophthalmology and visual sciences at UW–Madison, showed an improved tactic for delivering new genes into the drain, called the trabecular meshwork. 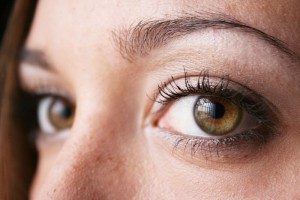 UW-Madison scientists have a promising new therapy to treat glaucoma by introducing genes into the eye.

Virus particles contain genes wrapped in a protein coat and then a lipid membrane. After the virus enters the cell and sheds its membrane, defensive molecules from the host can “drag the virus particle to the cell’s garbage disposal, called the proteasome, where it is degraded,” Brandt says.  “We wanted to know if temporarily blocking the proteasome could prevent the destruction of the gene delivery vector and enhance delivery.”

In the current study, FIV virus carrying a marker protein was placed on cells of the trabecular meshwork, with or without a chemical that blocks proteasomes.

Above a dosage threshold, the treatment roughly doubled the transfer of genes entering the target cells, Brandt says. The new genes also spread more uniformly across the meshwork tissue. Delivering more copies of the gene should give a greater therapeutic effect, opening the meshwork drain and reducing pressure inside the eye.

The present study concerns the tools for transferring genes, not the genes themselves, Brandt says. But even before the current study, he says he and Kaufman “have already identified at least two genes that could unplug the drain.”

In the long struggle to replace genes and cure disease, “eyes have been one of the big success stories,” Brandt says. A blinding eye disease called Leber’s congenital amaurosis damages the function of cells that keep the light-sensitive cells healthy; replacing the mutated genes has preserved and even improved vision in young patients. Approval for this gene therapy is now pending at the Food and Drug Administration.

To forestall danger from injecting a virus, “We take out pretty much all of the virus’ genes, so it has no chance to replicate and spread from where it’s initially injected,” says Brandt.

Although the technique does interfere with the anti-viral defense in the eye, the effect is temporary. “You encounter the drug once, then it is metabolized, and the innate inhibition is lost,” Brandt says.

“We have shown that this strategy does work in eye organ culture,” Brandt says.  “Once we do further work on efficiency and identify which gene to deliver, then we are probably ready to move toward clinical trials.”

The research was supported by Bright Focus Foundation, Research to Prevent Blindness, the National Institutes of Health, and other sources.