Funding pitches to investors tend to relate to innovative ideas in science, engineering or business. At the University of Wisconsin–Madison, a campus wide competition has harnessed that same entrepreneurial spirit in a slightly different sector: the arts.

The UW–Madison Arts Enterprise, a partner of the UW–Madison Art Institute, has presented the New Arts Venture Challenge each year since it launched in 2009. Under the leadership of Stephanie Jutt in the School of Music, the UW Arts Institute and Arts Enterprise have continued to promote innovation in the arts sector.
Judges sifted through artistic project ideas and narrowed them to four finalists, who then gave live presentations. The judges then granted one $2,000 top prize and three $500 grants to the other finalists.

“This is the only competition for innovative artists on campus, and anyone in the university can enter.” – Stephanie Jutt

“We wanted to celebrate and encourage artists who have innovative ideas,” Jutt says.  “This is the only competition for innovative artists on campus, and anyone in the university can enter – not just arts majors – there are artists everywhere on campus!” 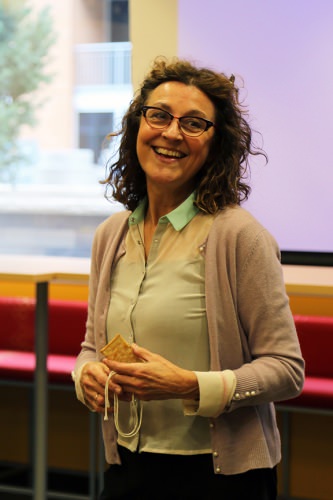 Stephanie Jutt, professor of flute and founder of the NAVC, addresses finalists and guests. Aliza Rand

Successful submissions show creativity, innovation and added value to the arts. Teams can consist of up to three members and the team leader must be a full-time UW–Madison student.

The judging panel this year consisted of both artistic professionals and academics, all prominent members of Madison’s arts community.

This year’s top pitch was a traveling photo exhibit called “Mira: Indigenous Lives Through Indigenous Eyes,” a curated archive of Guatemalan photos sponsored by UW–Madison students. Five novice Mayan teachers from Guatemala will curate the exhibit, traveling to explore an archive in Guatemala, and then working with the UW–Madison team to present the exhibit in Wisconsin and Australia.

Licho Lopez is a PhD candidate in curriculum and instruction and the team lead for the “Mira” project, which is Spanish for “look.”

The intention, more specifically, is to disrupt the colonialism that exists in the engagement of images in the archive by non-native experts, according to Lopez. She also sees this exhibit as a way of sparking thought and conversation.

“The funds will bring the teachers from their communities to the photo archives in Guatemala City and Antigua, Guatemala,” Lopez says. “The Mayan teachers, all of them brand new teachers, will give us another way of engaging with history as it relates to indigenous matters.” 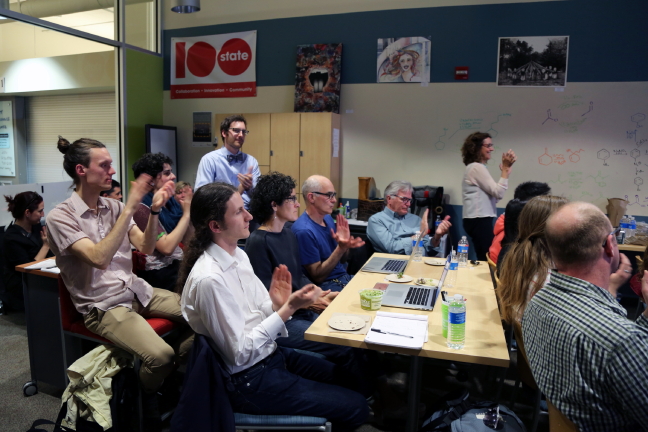 Updates on past NAVC winners

The first place winner for 2015, engineering student Alex Buehler, is a tenor sax player in the UW Jazz Orchestra who used 3D printing to create new tonal qualities for saxophone mouthpieces. Because the sound of a saxophone depends on the way the air resonates through the mouthpiece, even small changes in a mouthpiece’s inner shape could create very different sounds — especially important for performers who play different styles of music. 3D printing can create unique shapes inside a mouthpiece that would be impossible to carve using traditional techniques, and is also much less expensive.

In April, Buehler was named a recipient of the first annual Undergraduate D2P Commercialization Award, presented at the Undergraduate Symposium by Discovery to Product (D2P). The award recognized the undergraduate research projects with the greatest commercial potential to deliver value to society or the marketplace.

“An Alternative Odyssey: Stories from Behind the Walls,” by students José Vergara, Megan Kennedy and Samantha Link, won second place in 2015. Earlier this year, the renamed Artists in Absentia event presented a public reading, a multimedia exhibition at the Madison Public Library and a small publication to showcase the creative work produced by the men who participate in the Oakhill Prison Humanities Project. In February, the exhibit was featured as an Isthmus cover story.

Another second place winner, the Bellhops Blues and Hip Hop Record Project (presented by students Taylor Scott, Hiwot Adilow and Nathan France), has now completed recording a six-track release entitled Hero of My Own Tale. The musical project, featuring elements of blues, jazz, hip hop, spoken word and more, involved 20 artists, many of whom are UW–Madison students and alumni from diverse backgrounds.