On a recent Saturday, a basketball tournament filled the SERF gyms with the usual sights and sounds: huddles, cries of “Hands up!” and “Rebound!” from the stands, cheering fans and brightly colored jerseys. Teams played hard, hoping to qualify for statewide competition.

All that fun was for a seriously good cause. This Special Olympics tournament gave athletes with intellectual disabilities the rush of competing — and winning — against their peers, while building confidence in mainstream activities.

This combination of fun and service is important to Ben Kerzner, president and chair of Badgers For Special Olympics (BFSO), the student organization that ran the event. The group volunteers at Special Olympics Wisconsin events off-campus and holds its own student-run events, such as this tournament.

“The fact that these [teams] come out and have a blast, and that they trust us to put on an organized and well-thought-out tournament, means the world to us,” says Kerzner.

An event of this size is impressive considering the recent history of the organization. 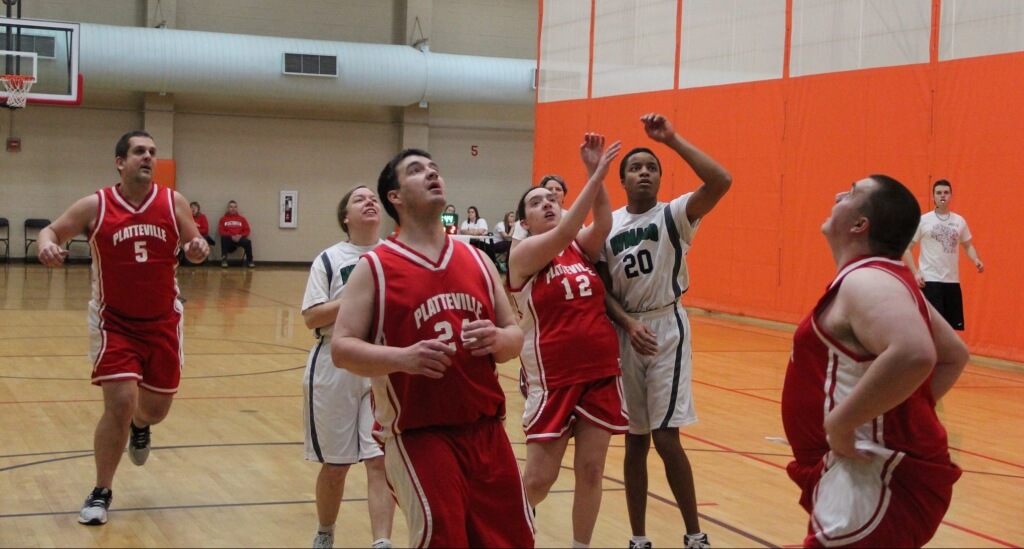 When Kerzner joined BFSO, it consisted of five people, no funds and disorganized events. Now, just four semesters later, the group has 165 members. They have applied for and achieved the status of Special Olympics College, a privilege that allows them to work more closely with Special Olympics Wisconsin and entitles them to national some funding. For the rest of their funding, they apply for grants with ASM or conduct their own fundraisers.

The basketball tournament is proof of how far they’ve come. On the day of the event, more than 80 volunteers helped with registration, awards, a “healthy habits” display, refereeing, keeping score and acting as fans in the stands, cheering more than 20 teams on with the help of pom-poms and signs.

“It’s the best thing that ever happened to my son. He feels successful; he does well. I should have done it sooner.”Dee Jaye Miles, parent of an athlete

Preparation started months ago. To organize the event, BFSO submits sign-up forms to Special Olympics Wisconsin, which then distributes the forms to the teams. Once BFSO gets the forms back, everything is up to them. Organizers must sort out logistical details such as renting equipment, navigating the ins and outs of insurance and answering a multitude of emails.

The athletes are equally eager.

“They look forward to it. They talk about it before the season even starts,” says Tiana Meyer, parent of an athlete.

Parents like Meyer cite a number of reasons they value these tournaments: social interaction, exercise and the chance to build confidence.

“It’s the best thing that ever happened to my son,” says Dee Jaye Miles, whose son has played on a Special Olympics team for two years. “He feels successful; he does well. I should have done it sooner.” 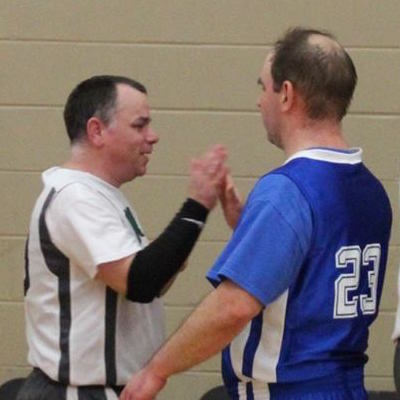 Opposing athletes high-five after a game.

It’s also an important competition for the teams. In order to be eligible for statewide competition, teams have to play in at least two tournament games. Unlike similar tournaments, BFSO does not require a registration fee, making the event free to all teams.

“Finding other teams around our area is hard,” says Meyer. “You have to go out of the county, so a tournament like this is really beneficial.”

Athletes appreciate the chance to compete with their teams. Sara Lawson’s favorite part of the day is simply “to be with my friends and to have a fun time.”

For the volunteers, the appreciation of the parents and athletes is its own reward.

“As a student, you’re always stressing out about grades and stuff,” says Kyle De Vries, a volunteer. “[It’s great] to see these guys just play basketball and be so happy from doing it.” 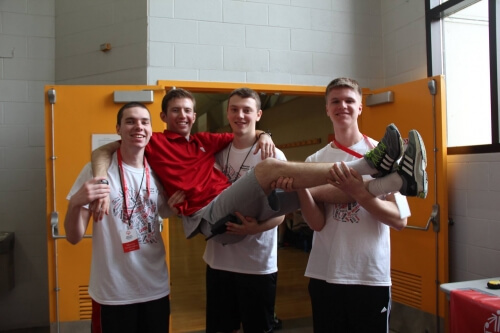 BFSO volunteers clown around during a recent tournament.

As enjoyable as the day is for volunteers and participants, Kerzner wants everyone to walk away with more than good memories. For the athletes, events like this provide a steppingstone to integration into mainstream society. For volunteers and the wider UW community, Kerzner hopes the event will help them recognize the value of Special Olympics athletes.

“I think a lot of people count individuals with intellectual disabilities out in their ability to interact, to think, to process, to live in mainstream society,” says Kerzner. “Through our club, that’s really what we’re trying to show our members: that these people are amazing, they contribute so much, and they’re smart and they’re funny and they’re athletic, and they’re no different than anyone else.”

In the future, BFSO wants to put on more events on campus that allow the Badger community to invest in Special Olympics athletes.