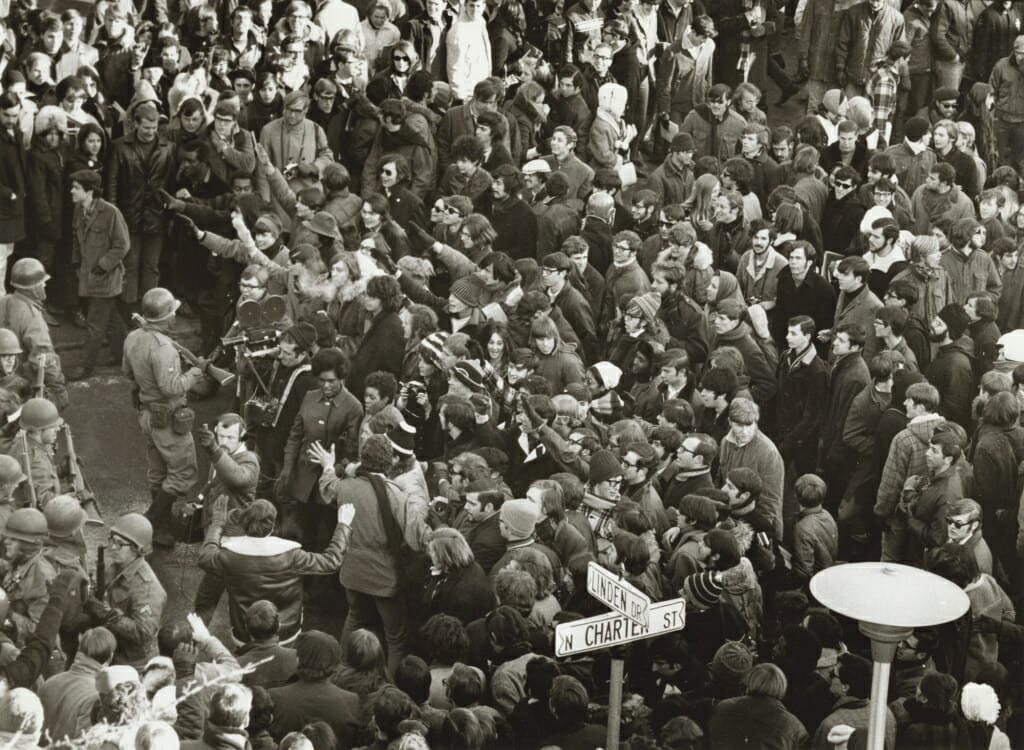 A crowd of strikers, police and onlookers gather near the corner of Linden and Charter during the Black Student Strike of 1969. UW-Madison archives

An oral history published online today by the University of Wisconsin–Madison recounts the Black Student Strike of February 1969 through the memories of more than two dozen people who organized, participated in or witnessed it.

The protest, surging and ebbing over roughly two weeks, was among the largest in the university’s history. It galvanized community support behind the group’s demands, which included the enrollment of more African-American students and the hiring and promotion of faculty of color. The strike led to the creation of the current Afro-American Studies Department, another of the group’s demands.

“The student strike was the culmination of three years of efforts – many meetings, agreements made and broken, a relentless faith in the protest process,” says Wahid Rashad, 71, one of the strike leaders interviewed for the project. “It got to the point where we felt that the only power we had left was the power to disrupt.” 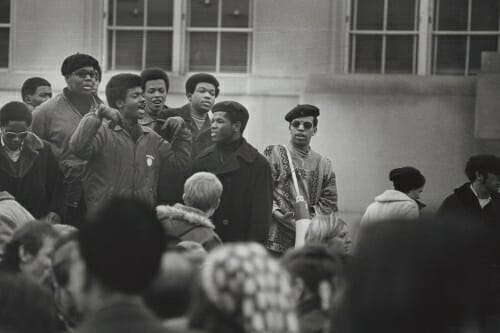 Some of the leaders of the Black Student Strike of 1969 gather to speak at a rally. UW-Madison archives

On Feb. 7, 1969, black students, propelled by longstanding grievances, called for a campus-wide student strike until administrators agreed to 13 demands. Joined by thousands of white allies, they held rallies to educate the community on racial inequities, boycotted classes, marched to the state Capitol, took over lecture halls and blocked building entrances. The latter actions spurred the governor to activate the Wisconsin National Guard.

The oral history project, which can be found at news.wisc.edu/black-student-strike/, marks the 50th anniversary of the strike. The project was produced by University Communications and University Marketing in partnership with the Black Cultural Center and The Black Voice, a student-run digital campus news site. Student journalists with The Black Voice and student members of the Black History Month Planning Committee conducted most of the alumni interviews.

“There’s been a lack on the university’s part, to some degree, in making sure that students are aware of the history of this campus and especially the histories of black and brown students and communities of color — the role they’ve played and the oppression they’ve suffered during their time on this campus,” says junior Shiloah Coley, of Olympia Fields, Illinois, co-editor of The Black Voice and one of the students who worked on the project. “It’s very important to acknowledge those histories and learn from them, and that’s what this project does.” 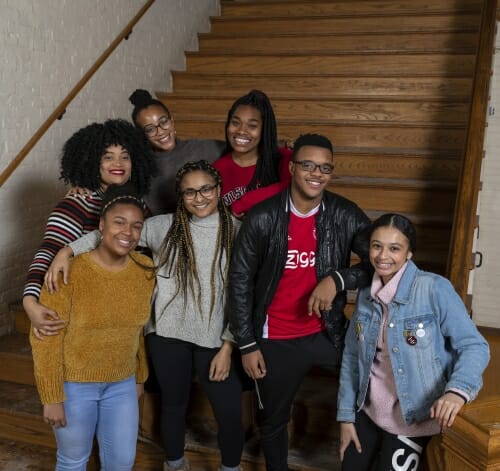 Sophomore Nile Lansana found common ground with his interview subject, Richard Spritz, one of the white allies who participated in the strike. Both say they learned a great deal from rooming with students of a different race. Lansana has a white roommate. Spritz had two black roommates at UW–Madison who introduced him to the issues surrounding the strike and encouraged him to get involved.

Lansana, a Chicago native, says it’s fitting to emphasize this moment in the university’s history.

“Black students spoke up for their rights and for the demands they felt they needed on campus,” he says. “As a black student on campus, it gives me hope for the future. I wouldn’t be here today without that work.”

Sophomore Chelsea Hylton interviewed Harvey Clay, a 6-foot-8-inch football player who says he lost his football scholarship because of his strike involvement. His participation took him away from his studies, and his coaches were not pleased with his activism.

“We need to understand these past experiences because they help us value what we have today and give us insights into how to be resilient like they were and how to continue to fight and resist like they did,” Hylton says.

As part of February’s Black History Month celebration on campus, a panel discussion open to the public will feature several of the strike participants. The event, “A Recollection of the 1969 Black Student Strike,” will be from 5 to 7 p.m. Monday, Feb. 11, at the Play Circle in Memorial Union. A reception will follow from 7 to 8:30 p.m. at the Black Cultural Center in the Red Gym.

Free tickets are available with a Wiscard or state identification at Campus Arts Ticketing at Memorial Union. For additional information on obtaining tickets, please call the box office at (608) 265-2787. Seating may be available at the door but is not guaranteed.

“For 50 years, we’ve had access to the administration’s take on the events that took place in 1969, and we’ve had access to what news outlets wanted us to know, but we never took the opportunity to hear from those directly involved and directly impacted by the Black Student Strike,” says Karla Foster, assistant director for cultural programming at the Multicultural Student Center, of which the Black Cultural Center is a part. “What better time than now, 50 years to the date, to get the original organizers’ and participants’ take on not just what happened, but more importantly, why it happened.”

Foster anticipates that the live panel discussion will be meaningful to all students on campus. She hopes it will have special resonance for black students.

“I want black students to have the opportunity to hear firsthand accounts and to be able to ask questions and get them answered on the spot,” she says. “I want them to hear, touch, and see the stories that were shared. And I want the student journalists to see who they were interacting with over the phone and deepen those relationships that I hope have just begun.”