From February through June, we will highlight the ways that UW–Madison powers the state’s economy through research and innovation, educates the next generation and reaches out to Wisconsinites to improve their lives. Watch for more at #CantStopABadger and #UWimpact on social media. Your support can help us continue this work.

In fact, since 1995, a hands-on design course has been a cornerstone of the College of Engineering’s first-year student experience. Tracy Jane Puccinelli created the current version several years ago, and now coordinates the program, teaching labs and lectures. A team of faculty provides instruction for 10 to 12 lab sections every semester. Puccinelli says it plays an integral role in welcoming first-year students and providing them an opportunity to “do” engineering right away.

“My hope is that we make them feel like they are part of our engineering community the moment they start at UW–Madison,” she says. “It’s also critical for first-year students to see how they can apply all of the physics and math they’re learning toward engineering projects.”

Although some projects were less hands-on than usual due to the COVID-19 pandemic, Puccinelli says students still worked on teams to solve real engineering problems. 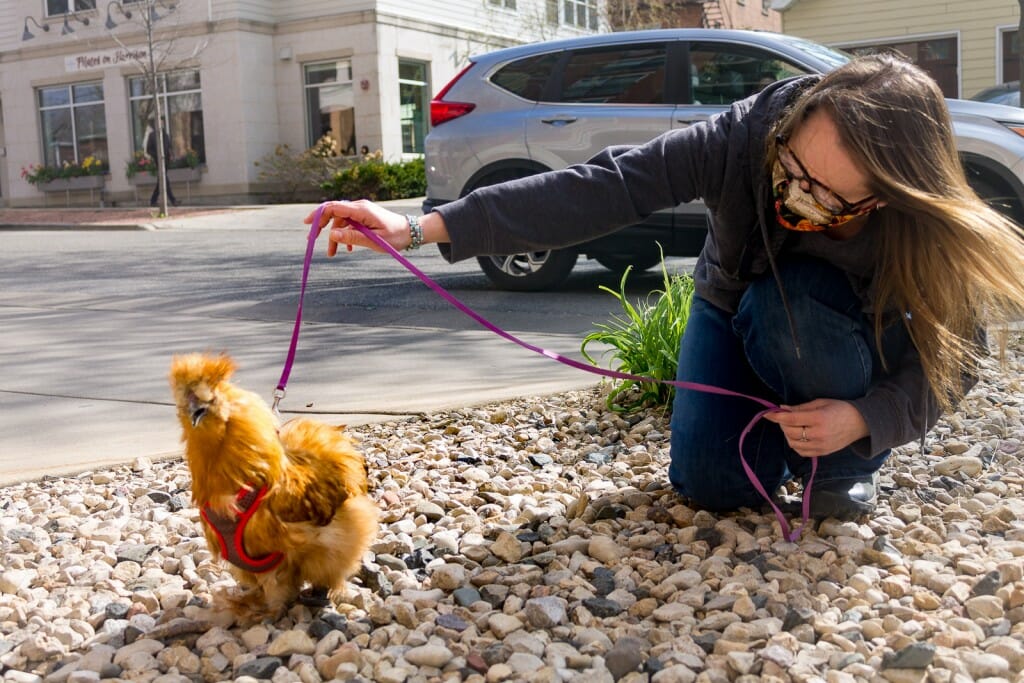 “We learn more by doing,” she says.In spring 2021, students in her class tackled three challenging projects for two clients. One group, “Team Eggscellent Prosthetics,” had the unique challenge of designing a prosthetic foot for a rooster, while “Team Eliv8” and “Team 5 Minute Crafts” each designed assistive devices for Dan Dorszynski, a Brookfield, Wisconsin, resident with muscular dystrophy.

Dorszynski already had worked with UW–Madison biomedical engineering students for four years to find solutions to everyday challenges he faces due to his muscular dystrophy. He says the simple act of sitting up and getting out of bed can be challenging and has grown more so in the last few years. He’s likewise had trouble finding suitable transfer devices, which allow him to move to and from his wheelchair.

With no affordable or dependable solution available, he turned to the Inter Engr 170 students.

“It’s crazy to think that it’s 2020 and there’s not really a solution for people like me,” Dorszynski says. “Submitting these ideas was an easy way to summarize the issues I’ve had and see what these brilliant students could come up with — and they came up with some great ideas. It’s been exciting to see.” 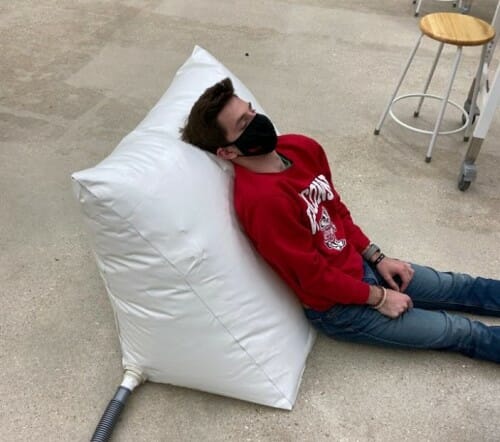 Team Elev8 created a device to help Dorszynski sit up and get out of bed. The device is essentially an inflatable pillow. When filled with air from an attached vacuum pump, it expands into a right triangle; as it inflates, it can quickly lift Dorszynski and help him get out of bed.

“We wanted to make an inflatable wedge that sits flat when Dan is sleeping on it, but can inflate to push him up in the morning,” says civil engineering student Hamilton Williams. “It’s got a pretty steep 60-degree sit-up angle on the front face, which was our goal. In reality, the wedge gets a slight bulge in it from the air, which can help push him up even further.”

Team 5 Minute Crafts designed a conveyor device to allow Dorszynski to transfer into and out of his wheelchair. The device, which the team describes as a “magic carpet,” uses a set of brakes that Dorszynski can turn on his own to advance or reverse the carpet.

Anuraag Belavadi, who is studying biomedical engineering, says Team 5 Minute Crafts’ members tackled this challenge by brainstorming a number of ideas, then weighing time constraints and the feasibility of fabricating their solution. In addition to the magic carpet, they also considered an overhead hoist to lift and move Dorszynski, and a winch system that would attach to a board under Dorszynski’s wheelchair seat.

“We liked the magic carpet system because it was convenient and reasonably simple compared to the other ideas that we had — and, our client seemed to like it better,” Belavadi says. 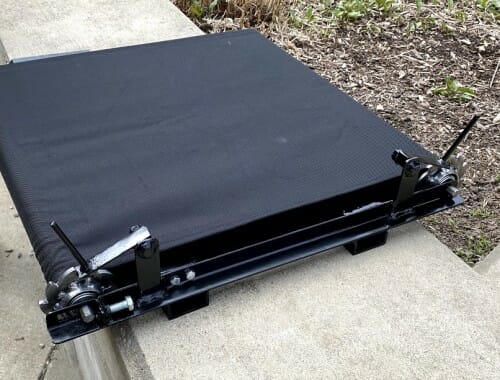 Members of Team 5 Minute Crafts created this transfer device, which their client, who has muscular dystrophy, can use to move out of his wheelchair. Photo courtesy of Tracy Puccinelli

Samuel Strachan, a biomedical engineering student, says the team has discussed future updates to the conveyor device with Dorszynski and hopes to add a motor to make it easier to use.

While the other two groups focused on solutions for a human client, Team Eggscellent Prosthetics designed and 3D printed a prosthetic foot for the aptly named “Peg,” a one-legged Silkie rooster. Local veterinary technician Kristen Cooley adopted Peg and, at the urging of a friend, contacted Puccinelli.

Team member Jordyn Geller, who is still deciding on which branch of engineering to study, says the project presented a unique challenge — in part because there’s not much available information on how to design prosthetic legs for chickens. However, through lots of collaboration with Cooley — and meetings with Peg — the team settled on an angled foot design.

Biomedical engineering student Meghan Detra says she and fellow team members needed to sift through what little information they could find and then apply it to their project. They also leaned on Cooley’s veterinary knowledge to design a prosthetic that fit and was comfortable for Peg.

“One big thing we’ve all learned is that just because there’s a lot of scientific research and documents out there doesn’t mean there’s research that applies directly to what we might be working on,” Detra says. “We’ve learned how to take what’s already been done and see how we can apply it to other types of research.”

For her team, that also meant being willing to change on the fly, recognizing that its first design might not ultimately be the one that best suits the client. Team Eggscellent’s hard work paid off: In late April 2021, the team met with Cooley and Peg and watched with delight as the rooster walked around in his new prosthetic foot.

Throughout the semester, students also had to work around some of the unique challenges imposed by the COVID-19 pandemic, including restrictions on in-person access to lab spaces for fabrication. And, given that the course itself was delivered remotely, that also meant the students needed to determine how to equitably delegate roles across team members who weren’t in Madison — or even in the same time zone.

“My team members adjusted the meeting times so I could attend the meetings as well,” says mechanical engineering student Yu Naito, who participated from his home in Japan. “It could be hard to adjust to that, but it was a good experience to be a part of a team even though I’m 12 hours away by flight.”

That flexibility and whole-team mindset are examples of the “soft” skills, which are equally important to the success of a project, that students develop in the class, says Puccinelli. “The incredible thing about all of these students is that with just a few of them being on campus, they accomplished a lot of great work,” she says.