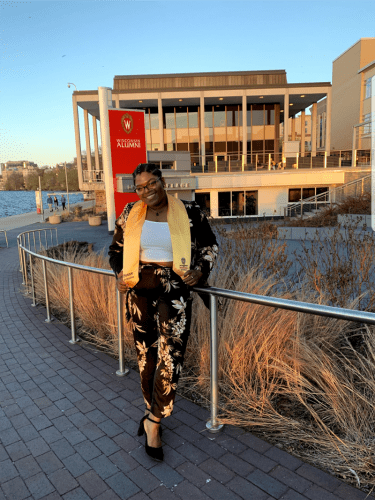 Stefanie Henry will graduate from UW–Madison this May with degrees in neurobiology and French.

When Stefanie Henry was only 6 years old, her and her brother’s lives were changed forever.

After the two were in a car accident, Henry’s brother Stefan sustained a spinal cord injury, leaving him quadriplegic. From then on, the family’s lives became much different, she says.

A physical disability, however, didn’t stop Stefan. He has since graduated from college, and he’s now a business owner and mechanical engineer.

For Stefanie, her brother’s perseverance has served as motivation in her own academic and career pursuits.

“My brother has always been my biggest role model, no matter what,” Henry says. “Taking into consideration all that he has been through and all that he’s conquered, to see him accomplish so many things and get his degree motivates me.”

The Henrys will soon have another college graduate in the family after Stefanie graduates from UW–Madison this Saturday, May 11. Her brother, she says, will be there in attendance to watch her receive her diploma.

Henry will graduate from UW as a double major in neurobiology and French, along with an extensive background in nervous system trauma research that is inspired by her brother’s injury.

“From a very early age, I became interested in his condition and why he couldn’t walk,” Henry says. “I never got straightforward answers, so I started looking for them myself.”

Starting in 2012 during her second year of high school, Henry built over 200 electrodes used for innovating electrical stimulation therapy, which helps in improving motor performance after spinal cord injuries. Her role in this research was later awarded the Neuroscience Research Prize at the American Academy of Neurology’s annual conference.

Henry also completed completed a two-summer research fellowship at the Yale School of Medicine in the Waxman Lab. As a research fellow, she contributed to experimental design for the new use of an FDA approved drug, previously used in cancer trials, as a treatment for pain in burn injuries.

Henry works as part of UW’s lab in the Department of Neurosurgery. According to Henry, the lab explores processes of improving recovery after spinal cord injuries, with a focus on axon regeneration.

Through her research, Henry says she not only hopes to be an advocate for those with disabilities, but also for women of color — a demographic that is often underrepresented in STEM fields.

During her first year at UW, Henry lived in the Women in Science and Engineering (WISE) residential learning community, which is a space dedicated to women who are interested in pursuing STEM careers. She later became a house fellow in WISE, where she was able to serve as a mentor for those living in the community.

“It’s extremely important for me to lift up others and to be a mentor for those who come from similar backgrounds as me,” Henry says. “WISE was able to give me the opportunity to connect with not only female students but also other female faculty who have careers that I dream of having in the future.”

Henry also attributes her ability to thrive at UW to the Posse program — one of the most comprehensive college access, diversity and youth leadership programs in the country. In fact, she says the Posse program is part of the reason she chose to attend UW.

The program recruits cohorts of high school seniors and offers training to prepare them academically  in fostering positive social change on campus. The students are also grouped into multicultural teams of 10 to be a support network for each other and to be catalysts of change on campus.

“It was Posse that introduced me to UW–Madison and the strong research presence that it has,” Henry says.

Now, Henry has hopes of continuing her research in nervous system trauma and spinal cord injuries to help others like her brother. Upon graduation, she will work as a research associate at UW Hospital in the Alzheimer’s disease research center. She’ll also serve as a biospecimen coordinator for the Wisconsin brain donor program.

Though Henry’s time as an undergraduate has come to a close, she says getting her bachelor’s degree is just the beginning of her educational journey. In a few years, she hopes to fulfill her dream of becoming a physician-scientist by getting both her M.D. degree and Ph.D.

While her bachelor’s degree is just one of many steps toward her career goals, Henry says it still has big implications, especially coming from UW.

“In earning this degree, I’ve learned a lot of other skills in adjacent to the biological knowledge that I’ve gained,” Henry says. “My time at UW has given me much more strength and confidence that I’ll be able to do anything I set my mind to.”