Standing still may help improve antennas that scan in all directions 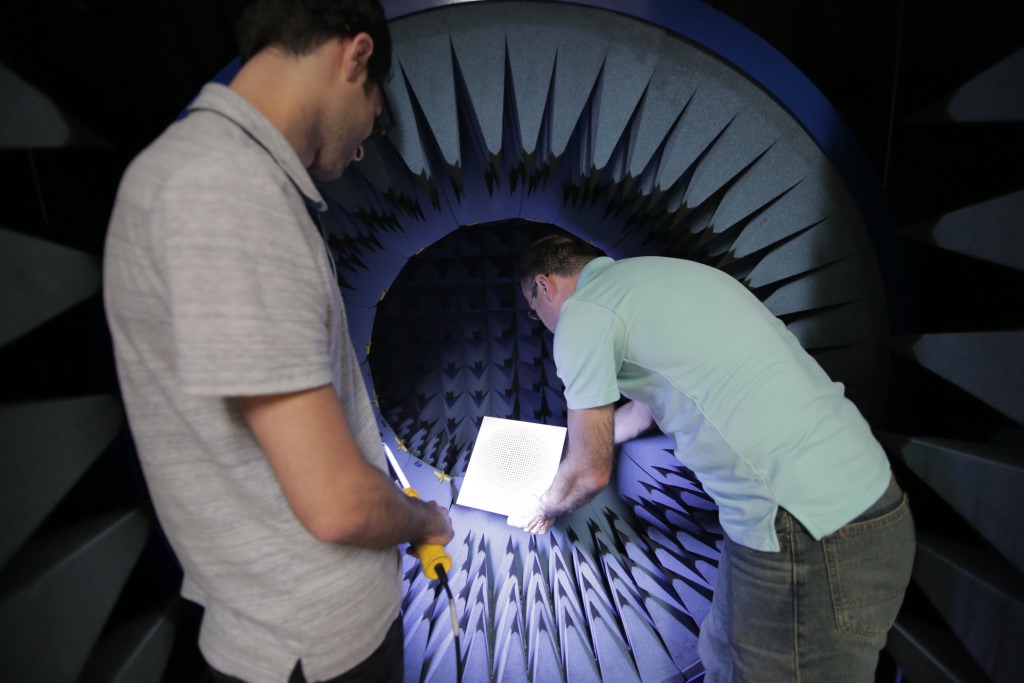 Antennas often need to trace circles in the sky. For example, radar arrays atop air-traffic control towers rotate to sweep signals in all directions.

But spinning large objects nonstop takes a lot of time and mechanical energy. So scanning from a stationary position could speed up long-range detection and communications.

Now, with support from a $1.1 million grant from the U.S. Office of Naval Research, University of Wisconsin–Madison electrical engineers are working out a new strategy to create antennas that spin their beams in circles while the devices stand still.

“Our approach doesn’t depend on exotic materials that bend the laws of physics,” says Nader Behdad, principal investigator on the project and UW–Madison professor of electrical and computer engineering. “We’ve found a practical way to achieve beam-steering that the antennas field has largely overlooked for many years.”

Engineers have long searched for ways to rapidly reorient radar beams, but progress has historically been slow, and existing technology is still too expensive for widespread use. Still, researchers persevere because scanning the sky can make the difference between life and death.

“In defense situations, you need to detect incoming objects or see where you are going very quickly,” says John Booske, another UW–Madison electrical and computer engineering professor and Behdad’s co-principal investigator. “The ability of a mechanical rig to move a big, heavy parabolic dish back and forth limits how quickly you can respond to potential threats.”

One alternative to mechanical motion is using flat planes made up of miniature transmitters that each emit fractions of an overall signal — every fraction varied so that it all adds up to a single linear beam. These antennas, called phase-varied arrays, can also modulate the direction of that overall beam by altering the electronic properties of each individual signal source.

However, packing multiple small-scale antennas into one surface adds up to costly and colossal devices overall, limiting their usefulness.

Rather than building a phased array from numerous individual antennas, the team instead plans to create special reflective surfaces that achieve the same effect, but only rely on one single signal source. 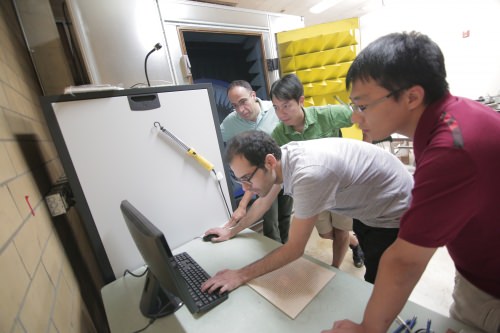 “Up until this idea there was practically no way to meet the almost impossible specification of the ideal solution,” says Booske.

Much like the way in which the curved reflector in a car’s headlamp concentrates light emanating spherically outward from a single bulb into a forward beam, these flat arrays focus microwave signals into directed columns by altering the electronic properties of individual elements on their surfaces. But unlike mirrored dishes, these devices can vary the direction of the reflected beams by tuning individual elements on the surface.

Achieving that tuning, however, is no easy task. Behdad tried numerous complicated approaches to modulate every component before he and Booske realized that they did not need to control each element one by one. Instead they harnessed small-scale mechanical motion within the entire antenna itself by making tiny adjustments to one large component, called the ground plane, that sits below the entire structure.

“Luckily for us, in order to do beam-steering, we really don’t need to individually tune each element,” says Behdad. “All we need to do is create a gradient and we can do that by simply tilting the ground plane on one corner a little bit down and the other a little bit up.”

Small tilting motions inside an overall flat plane require much less time and mechanical force than spinning a large reflector dish. To test the feasibility of this approach, the group made a low-cost prototype, which successfully provided proof of concept of electromagnetic principles. Now, the team is working to identify appropriate materials and techniques to improve this concept, making it suitable for real-world applications.

The researchers filed a patent on their concept with assistance from the Wisconsin Alumni Research Foundation. The patent is pending.