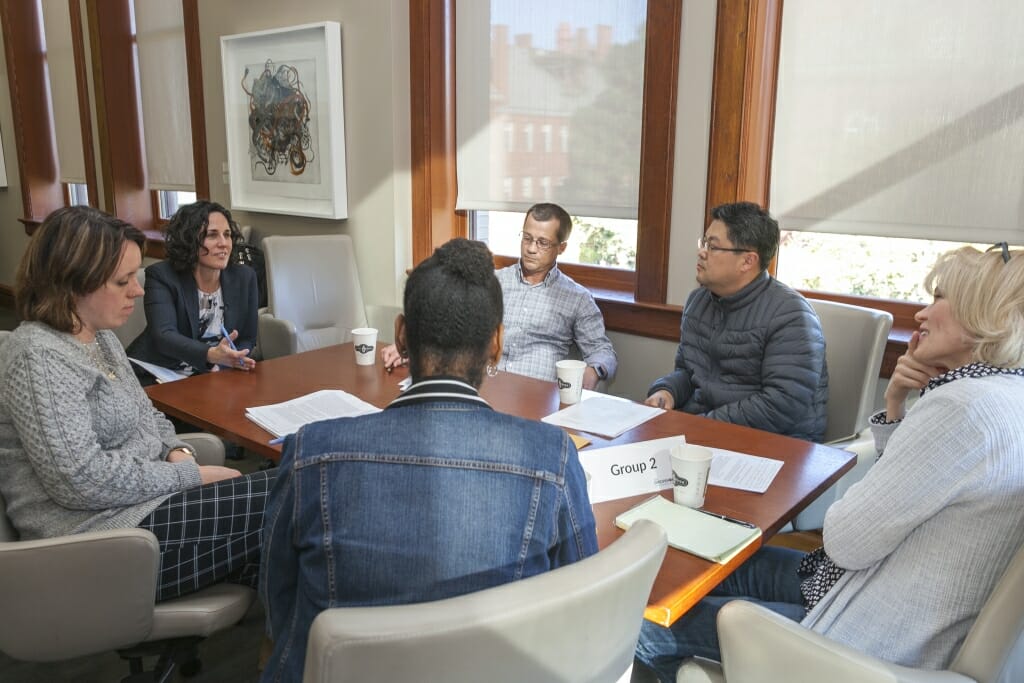 Paula McAvoy, far end of table, checks in with a group of instructors during a session of The Discussion Project at the UW–Madison Education Building. Photo by Brian Ebner

On a recent morning before the start of classes this semester, 24 University of Wisconsin­­–Madison instructors gathered on campus to learn how they could improve the quality of the discussions that unfold in their classrooms.

The training began with a question: What does a good discussion look like?

“Lots of students are participating,” said one instructor.

“The facilitator keeps moving the discussion along,” said a third.

Paula McAvoy, the leader of the training, zeroed in on the word “facilitator.”

“Yes, that’s an important distinction,” she told the group. “When you are the facilitator of a discussion, you’re taking on a very different role than instructor.” 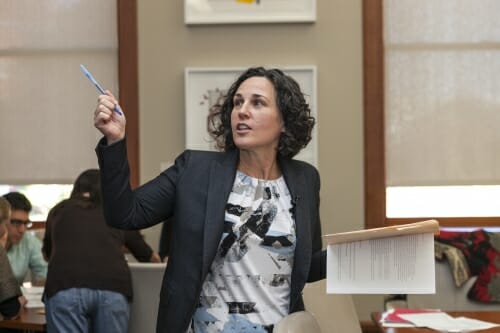 Paula McAvoy is the director and lead instructor of The Discussion Project, a new professional development initiative at UW–Madison that seeks to create classroom discussions that are engaging, welcoming and academically rigorous. Photo by Brian Ebner

Over the next two days, the 24 instructors immersed themselves in every nuance of the facilitator role, from how to get a shy student to talk to how to get an overly chatty one to stop. They learned strategies for designing effective small-group and whole-class discussions, and they grappled with ethical dilemmas that can arise when controversial topics are brought into the classroom.

Fittingly, the multi-session training is called “The Discussion Project.” It is a new professional development initiative created at the UW–Madison School of Education to help instructors both facilitate high-quality classroom discussions and prepare their students to participate in them.

The first faculty cohort of 20 instructors — a mix of professors and academic staff members — completed the training during the 2017 fall semester. The second cohort of 24 instructors met for two all-day sessions in mid-January and will reconvene for a final session in March.

The project seeks to create welcoming, engaging and academically rigorous classroom environments. While designed to deepen learning for all students, the pilot project is one of several initiatives that university officials think will have the added benefit of improving the campus experiences of students of color and other underrepresented students.

“We think this effort shows tremendous promise for the university on many levels,” says Provost Sarah Mangelsdorf, whose office is providing major funding for the project. “We know that an engaging classroom discussion helps students better retain knowledge, and we know that students can learn a lot from each other. We also want the classroom to be a place where all students feel comfortable sharing their ideas and opinions.”

Leading a high-quality discussion isn’t easy, but instructors have much more control over the outcome than they might think, says McAvoy, the project’s director and primary instructor.

“It’s a common myth that a good classroom discussion is largely dependent on who enrolls in the class, and that’s just not true,” she says. “Participating in a discussion is an academic skill that can be explicitly taught to students. They can get better at it.”

Instructors often assume that college students already know how to engage in classroom discussions, McAvoy says. Research suggests students often don’t understand what is expected of them or know how to prepare for a discussion. 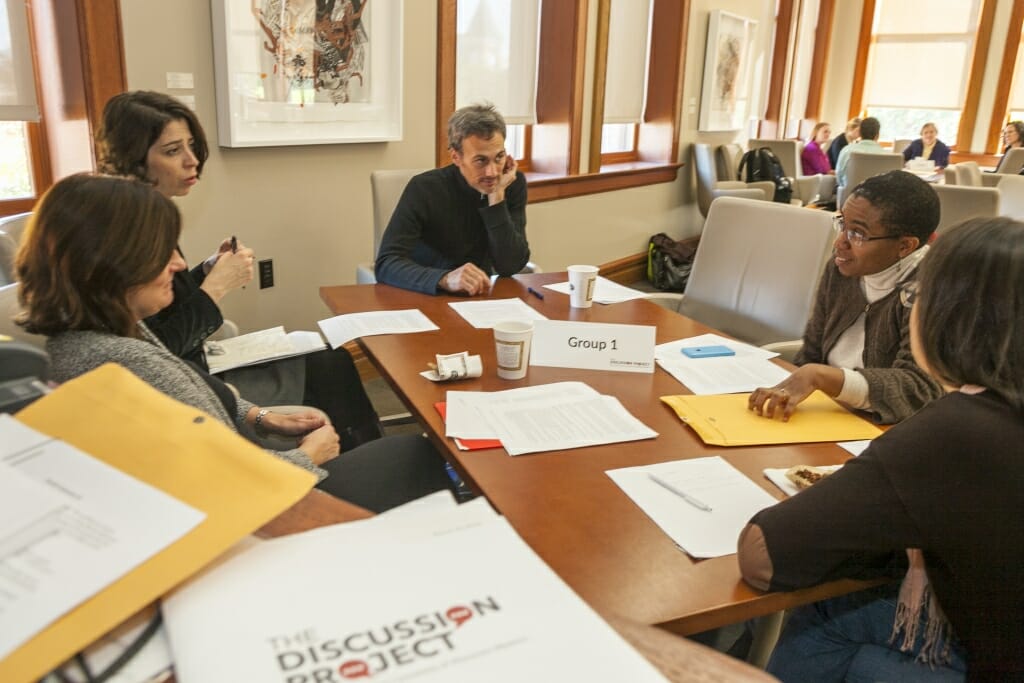 Participants in The Discussion Project are introduced to different forms of small group discussion by experiencing the various options themselves as part of the training. Here, a group of instructors brainstorm potential responses to ethical dilemmas that can crop up during classroom discussions. Photo by Brian Ebner

During the January training, McAvoy encouraged instructors to think of discussion as a skill akin to writing — one that is non-negotiable and intended for everyone.

“As instructors, we don’t get to say, ‘Some of my students like writing and others don’t, so the ones who don’t like writing don’t have to turn in any writing assignments,’” she told the group.

McAvoy, the program director for the Center for Ethics and Education on campus, developed the project in collaboration with Diana Hess, dean of the School of Education. Their effort was prompted by a call to campus from Mangelsdorf and Chancellor Rebecca Blank to create programs that further inclusive excellence.

“Given the expertise in the School of Education in discussion as a form of teaching and learning, it made sense to develop a special project,” says Hess, who holds the Karen A. Falk Distinguished Chair of Education.

She and McAvoy drew on 10 years of research the two conducted in high schools for their 2015 award-winning book, The Political Classroom: Evidence and Ethics in Democratic Education.

They found that in classrooms where the teachers did all the talking and there was little discussion, students were largely oblivious to the diversity of opinions and experiences around them.

“The students tended to think that pretty much everyone in the classroom held the same views, even though we knew that wasn’t true, because we’d done elaborate surveys of the students,” says Hess,

Students in these classrooms weren’t benefitting from the diversity in their midst, Hess says.

“Discussion-rich classrooms are valuable because students hear multiple perspectives and learn how to engage civilly with those holding opposing views, and that’s an important skill in a democracy,” she says.

McAvoy put it this way during the January training: “We have students at UW–Madison from across the state, from across the country, from across the world. If we are committed to diversity on this campus, we should want them to be doing more than just sitting shoulder to shoulder taking notes. They should be talking to each other in meaningful ways in the classroom.”

Participation in The Discussion Project is free and open to any faculty or staff member who teaches anywhere on campus. For each cohort so far, the number of applicants has outstripped available seats by about two to one. Participants are chosen based on multiple factors, including a desire on the part of organizers to have a mix of veteran and new instructors and representation from across the campus.

Of the 44 instructors involved so far, 26 are tenured or tenure-track professors, 12 are academic staff members who teach, five are clinical faculty members, and one is a post-doctoral fellow who teaches. The longevity of their UW–Madison careers ranges from one month to 24 years.

McAvoy says she’s been pleased that word has spread far beyond the School of Education. The 24 participants this semester represent 16 areas of expertise, including Afro-American studies, business, law, nursing, philosophy and soil science.

The first cohort represented 15 fields. One of those who completed the fall training, Catherine Arnott Smith, says she jumped at the opportunity.

“All of us who teach have had that experience where you plan for a discussion, and then, crickets, it just goes thud,” says Smith, an associate professor of information studies.

Smith calls The Discussion Project “probably the most valuable teaching-centric experience I’ve had in my 11 years on campus.”

The training taught her the value of structure, Smith says, even to the point of sometimes delineating the exact number of minutes each participant in a small-group discussion is expected to contribute something. She initially thought such an approach might be too rigid or get in the way of student expression. She’s found it works well.

“What it actually does is enable everyone to contribute, even those who feel they are too shy,” she says. “It ups the students’ expectations of themselves.” 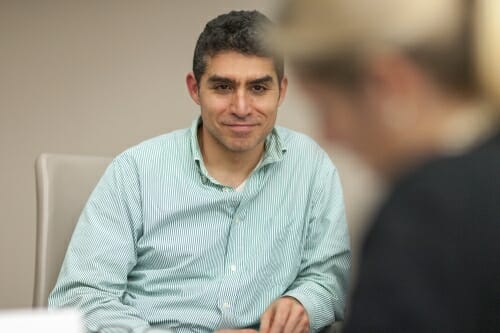 Nadav Shelef, an associate professor of political science, said he immediately took several ideas from the training back to his students, like framing discussion as a skill that can be developed. Photo by Brian Ebner

Nadav Shelef, an associate professor of political science and a member of the first faculty cohort, said he immediately took several ideas back to his students, like framing discussion as a skill that can be developed, and openly setting expectations for discussion participation.

“The more emphasis I put on the process, the better the outcome,” he says.

Craig Albers, an associate professor of educational psychology, says an unexpected benefit of the fall training was developing professional relationships across disciplines.

“I thought the participants would be primarily or exclusively School of Education professors,” he says. “But the roster of participants was comprehensive, from the Law School to the School of Nursing. That component, in and of itself, was extremely rewarding.”

Some training efforts across the country are designed specifically to help students and instructors negotiate highly controversial issues like race and inequality, Hess says. The goals of The Discussion Project are purposely broader, she says. The primary aim is to improve the quality of classroom discussions across the board, regardless of the discipline or whether a topic is considered sensitive or provocative.

Still, being able to facilitate a discussion on a hot-button issue is an important skill, especially in today’s contentious political climate, Hess says. Participants in the training spend several hours tackling hypothetical classroom scenarios so that they’re prepared to respond to student comments that are off-topic, inappropriate or hostile.

One option in such situations, McAvoy told the group, is to challenge the student in a non-confrontational way by saying something like, “You’ve just made a really provocative statement. What do you see as its strengths and weaknesses?”

In addition to the training sessions, participants can choose to receive tailored feedback from an instructional coach. This can take many forms, including having the coach observe a discussion in the instructor’s classroom. Jane Bernstein, a trainer and facilitator who taught social studies for 20 years at Madison West High School, is serving as the coach.

The pilot year is using a design-based research model in which participants provide The Discussion Project team with extensive feedback on how to improve the training. Data collection and evaluation is being done in collaboration with the Learning through Evaluation, Adaptation, and Dissemination (LEAD) Center, which is housed within the Wisconsin Center for Education Research at the School of Education.

The goal for the pilot project is to end up with a really tight curriculum that can be used on this campus and perhaps other campuses, Hess says.

“To our knowledge, this is a unique program, though given the vastness of the higher education landscape, we can’t be 100 percent sure,” she says. “When I have talked with deans at other campuses, in Wisconsin and beyond, there is a lot of interest because they do not have a similar program. That’s one reason we are considering taking the program to other campuses in the future.”