Social work graduate: ‘My greatest goal … is to make people see each other as human beings’

A 16-year-old boy is shown into the room. There are four tables set up in a rectangle; seven people sit around the ‘“U,” facing him. He approaches them unenthusiastically and sits down.

“We’re not that scary,” Shannon Davis assures him. “We’re just going to talk.”

While this is certainly not a threatening environment – it is a clean, beautiful church lobby, and the majority of people in the room are teenagers – it’s clear he doesn’t buy it at first.

He’s here because he has been cited for disorderly conduct, and he’s answering to youth court, a youth-run and youth-driven restorative justice program. A trained jury of peers evaluates each offender’s situation and imposes a rehabilitative sentence. Typical sentences have included mentoring, tutoring, discussion groups, serving as a juror, or even art or music lessons. It’s a great opportunity: If he completes his sentence, the citation will be dropped.

It probably doesn’t feel like an opportunity to him, though. It just feels like he’s in trouble.

But as soon as the other teens start asking questions – real questions, not condescending or leading ones – he realizes they’re on his side, and he visibly relaxes. They’re not assuming or judging; they’re trying to understand his story.

These students have been taught by a master.

That master is Shannon Davis, a UW–Madison student from Stoughton graduating with her bachelor’s in social work and a certificate in criminal justice this spring. Davis is an intern with the youth court program and she organized and trained this branch.

“The most important thing I learned at UW is never to judge people, because you don’t know what their back story is,” Davis says. 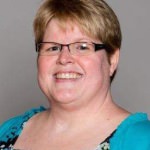 Her own life is a testament to that. Davis walks with a fun, multicolored cane, but its delightful wackiness belies the seriousness of the medical issues she’s endured. Twenty years ago, she suddenly came down with a host of health problems, but doctors could not identify the cause. The problems were so severe she was forced to quit her job as a graphic designer.

She was eventually diagnosed with a host of rheumatological diseases, primarily lupus. The process of diagnosis and treatment meant over 10 years of ambiguity, hundreds of appointments with doctors, 15 surgeries and millions of dollars in medical bills.

She still struggles with her health, but once her symptoms were relatively controlled, she became introspective. She was 40 years old, and the last decade had been less than ideal. What did she want to do with the next 40? She realized that she simply loved helping people.

“And lo and behold!” she says, slowly and with wry humor, “Social work is the helping profession. Who knew?”

For her efforts to further her education in the face of personal challenges, UW–Madison presented Davis with an Outstanding Undergraduate Returning Adult Student Award this year. And she will be the keynote speaker at the School of Social Work’s graduate recognition ceremony.

Davis specifically wants to help youth in the criminal justice system, because in her refusal to judge, she knows there are many factors that lead to crime. She witnessed this firsthand last summer when she interned in the juvenile court system.

“That really hit me hard, doing that job,” she says. “Because there literally was not one kid I met that didn’t have a host of overwhelming crap going on in their lives: bad family situations, foster care, abuse, trauma, mental illness.”

She struggled there, because she was always asking questions. She will stubbornly, patiently, and good-naturedly wait until she understands the “Why?” Why is this youth here? Why is the system set up this way? Why doesn’t this youth have access to mental health services?

“The most important thing I learned at UW is never to judge people, because you don’t know what their back story is.”

But this stubbornness doesn’t come at the cost of likability. In fact, it’s just the opposite. Her deliberate speech, constant eye contact, and constant undertone of humor assure you that she is going to stick with you no matter what.

“I never experienced Shannon as an obstructionist,” says Nick Yackovich, a clinical assistant professor of social work. “It’s more of genuine curiosity and reflection, and I appreciate that.”

This serves her well at youth court, where questioning to get to the back story – and keeping kids out of the formal justice system – is the whole point.

“When the jurors are looking at a case, they’re not only looking at what is happening with that particular incident, but also just how is this youth doing in general,” says Lorrie Hurckes, executive director of Dane County TimeBank.

TimeBank, a community resource sharing network, started this youth court in 2006, in response to community members who felt that the municipal tickets youth were receiving did little to get to the root of the problem.

It seems to be working. John Bauman, juvenile court administrator, believes in the program.

“I’m hopeful that some of the lower numbers of kids that we’ve seen in detention as well as the formal court system is a result of that,” says Bauman.

Back in youth court, the 16-year-old is done answering questions, and an adult leads him out of the room to wait while the jury deliberates.

The students display a high level of insight and consider peer pressure, his plans for the future and his strengths and goals. But Davis still pushes them to consider new angles, deeper reasons. “Does that mean there’s a question of whether his actions were defensive?” she probes. “What happens with his friend group, if he walks away?”

She presses because she believes everyone deserves an in-depth look. “My greatest goal as a social worker is to make people see each other as human beings,” she says.