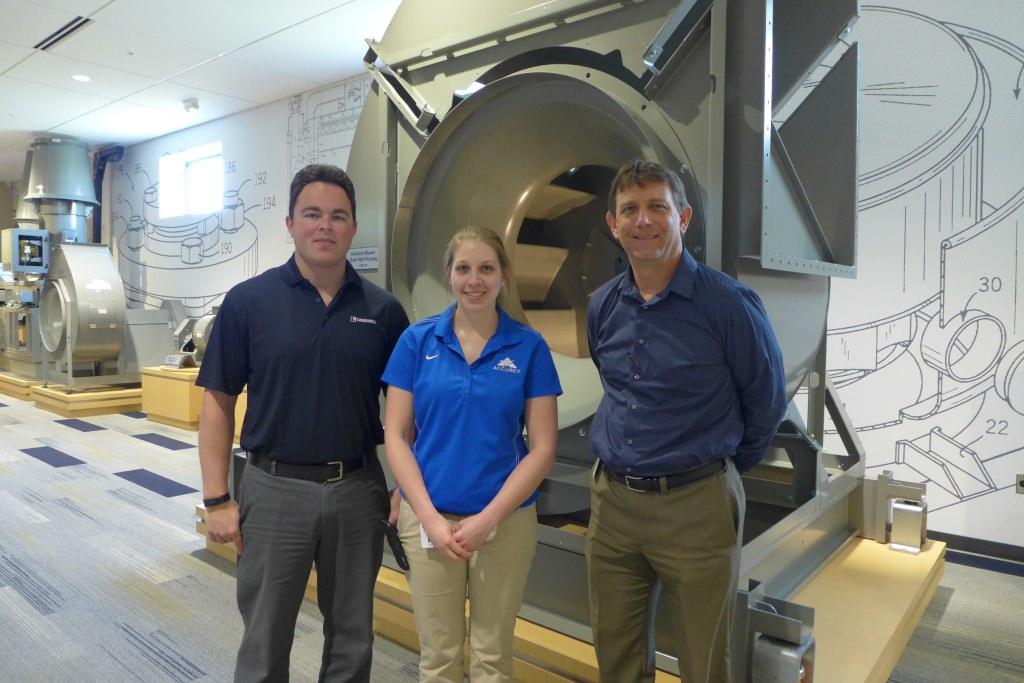 From left, UW–Madison alumni Derek Hawley, Ashley Stubbe, and Scott Graf at Greenheck’s headquarters in Schofield. Stubbe, with a bachelor’s degree in mechanical engineering and a master’s degree in biological systems engineering, is an application engineer in the powered roof ventilator department. “When I interviewed, I was amazed at how many people were here 10-plus years. I liked it that Greenheck offered fluidity of choices, so we worked together to design a rotational program in manufacturing, product development, and sales that worked for me.” David Tenenbaum

Pallets stacked with various gauges of sheet metal stand at one end of a long, low and surprisingly quiet factory in Schofield, in Central Wisconsin. At the other end, building ventilation equipment is being crated for shipment around the United States. In between, a tightly choreographed manufacturing system ensures high quality, low cost and rapid delivery.

Instead of snips, an automated hole-puncher punches holes for louvers, fasteners, mountings, and access. Then with rapid, jerky moves, an automated laser cutter slices a dozen or more parts from each sheet. The parts move through an assembly system that will, within a week or two, spit out ventilation and air-handling equipment–fans, packaged heating-cooling units, kitchen and lab ventilation, and dozens of other air-handling machines that, in their anonymous gray, stud the walls and roofs of stores, factories, warehouses, apartments, and condos across America. 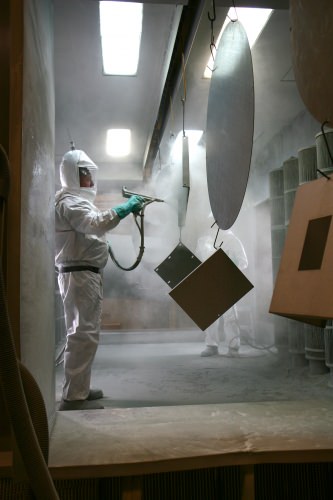 The paint shop at one of the 13 Greenheck facilities in and around Schofield, Wisconsin. Greenheck also manufactures and assembles equipment in North Carolina, Kentucky, Tennessee, Minnesota, Mexico, and India. Photo courtesy of Greenheck

Despite Greenheck’s size and growth – 2,700 workers in Wisconsin  and 3,400 worldwide — Greenheck is hardly a household name. “People are surprised: ‘Why have I never heard of this place?’” says general manager of architectural products Scott Graf, who got his first UW–Madison engineering degree in 1988. “We sell into commercial markets, and for many business units, we have 40 percent to 50 percent of the market. But unless you are in the construction industry, you would not know us. If you are in construction, you know Greenheck.”

Since 1947, when founders Bernie and Bob Greenheck started expanding their sheet metal shop, the company has grown into a state-of-the-art machine that does what some Americans no longer think possible: Compete with anybody in manufactured goods on features, quality, durability and price.

Greenheck’s “product” is rather like water: most Americans take a steady supply of “conditioned air” for granted – until it’s gone.

And the responsibility for ensuring that the air never stops falls to a motivated workforce, well supplied by 47 graduates from UW–Madison, and another 234 from other UW system schools.

In 2004, 2012, and again in 2016, Greenheck was named Wisconsin Manufacturer of the Year in the competition’s largest size category.

With an invitation from Graf, who has a bachelor’s degree in mechanical engineering and a master’s degree in manufacturing system engineering, we decided to visit and see what all the success was about, and look into how UW–Madison has contributed to that growth.

Today, newer employees with management aspirations who are selected to be in a leadership program are expected to “rotate” through different areas of the company in order to gain a well-rounded resume with the company. 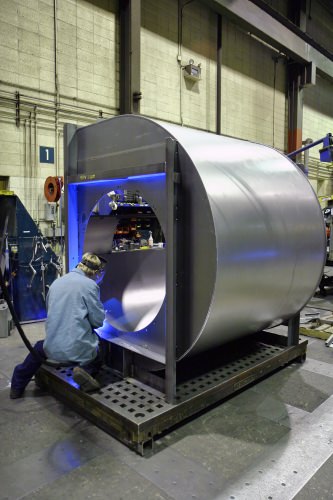 Welding an air-handling enclosure at one of the seven Greenheck factories in the Schofield area. Photo courtesy of Greenheck

“Back in 1990 the company encouraged internal learning opportunities. I sat in purchasing, quality, manufacturing engineering, operations management, and now I’m a general manager,” Graf says. The core of engineering is problem-solving, he adds. “Problem-solving is an organized thought process, and all the exposure to different things in Madison served me well in that area.”

The relationship with UW–Madison persists. Hawley, who received a bachelor’s degree in industrial engineering in 2006 and is a product manager in propeller fans, attended courses in quick-response manufacturing (QRM) at UW–Madison too.

“We wanted to reduce lead time for our louver business.” Applying the principles from the UW–Madison sessions, “We did modeling, prototyping of business segmentation, and after six or eight months of education and project teamwork, our suggestions were implemented.”

According to Graf, “They helped take a business that was struggling and turned it around, made it into a successful supporting entity that has 10 percent of our total sales.”

Those advances “close the loop,” says Rajan Suri, founding director of the QRM center. “Greenheck helped start up the QRM center in 1993 with a small investment, and has helped in both directions.” From June 19 to 22, the Center held its Fifteenth International Conference on Quick Response Manufacturing in Madison, with more than 150 attendees.

Greenheck relies on its culture, Graf says. Gesturing at a display of new fan motors that slash power consumption, he says, “This is a continuous improvement culture. We don’t look at what our competitors are doing. We keep driving forward. The competition can try to replicate machines and equipment, but they can’t duplicate the culture.”

UW-Madison experts have also been called into play for material analysis and other consulting roles, Graf says.

Family activities, like picnics, ball games, and charity projects are built into the culture. And when Greenheck sends employees to business or manufacturing classes at UW-Stevens Point or UW–Madison, Graf says, the course time is considered work time. 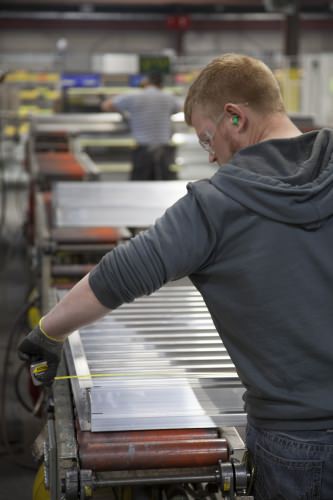 A worker measures a louver at the Greenheck factory in Schofield. Photo courtesy of Greenheck

“I decided to be an engineer because I liked problem-solving,” says Hawley. “Being able to look at something from multiple angles and perspectives, having those toolsets, that is what schooling at UW–Madison helped develop. But problem-solving does not mean anything unless you can execute.”

Is manufacturing declining in the United States? Hawley says, “We just put in a new campus in North Carolina, and for us, manufacturing is not declining; our growth is continuing. Our innovation center (a high-tech building with design tools like wind tunnels and a no-echo chamber for measuring equipment noise) was put up in Schofield just two years ago. We would not be investing in this community if we thought our manufacturing would be declining.”