Simpler COVID-19 test could provide results in hours from saliva 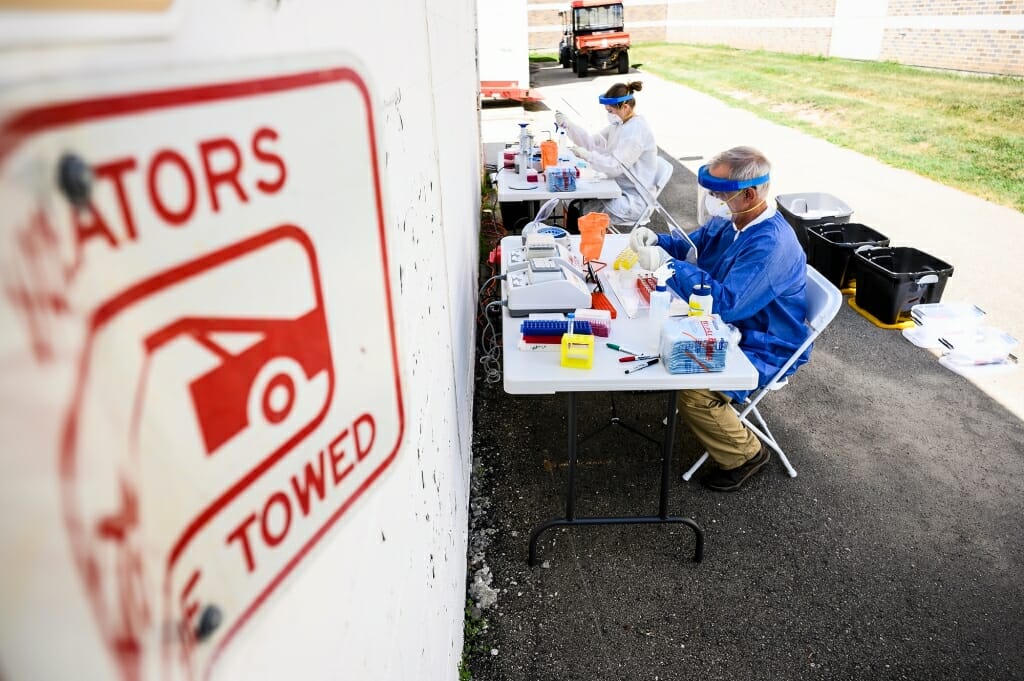 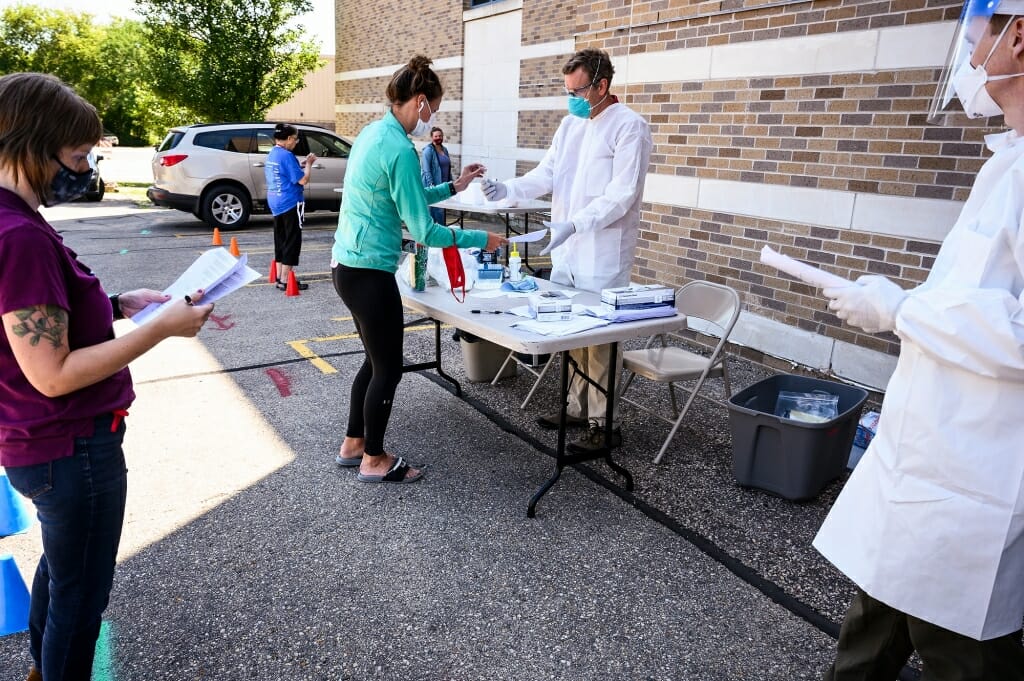 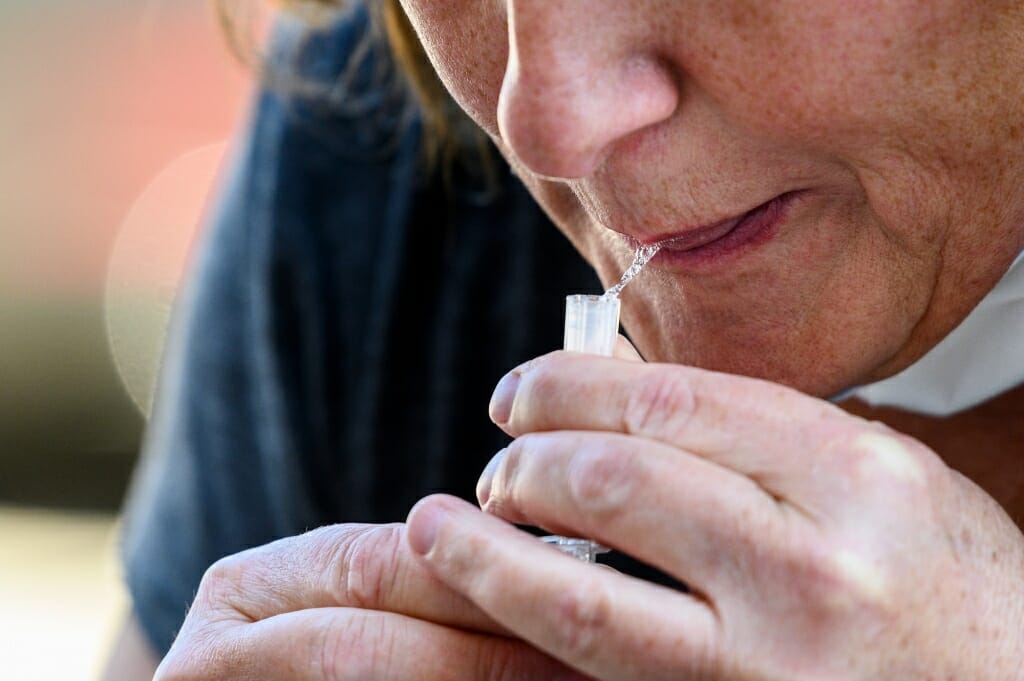 A volunteer spits in a small vial as part of a trial of a new COVID-19 saliva test. 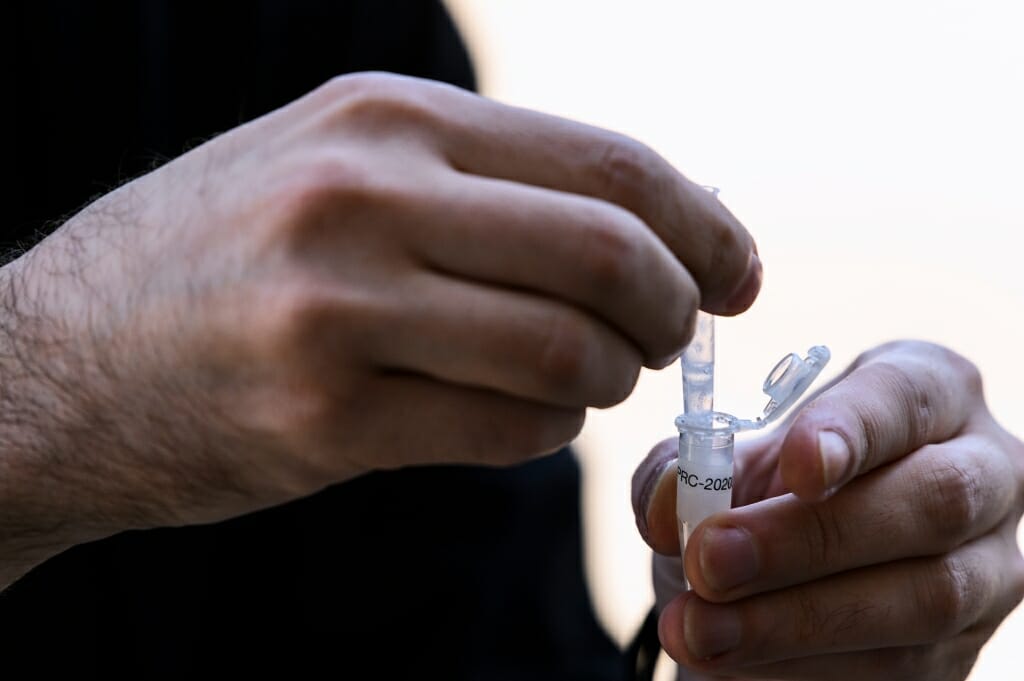 A vial with saliva is processed as part of a trial of a new COVID-19 saliva test. 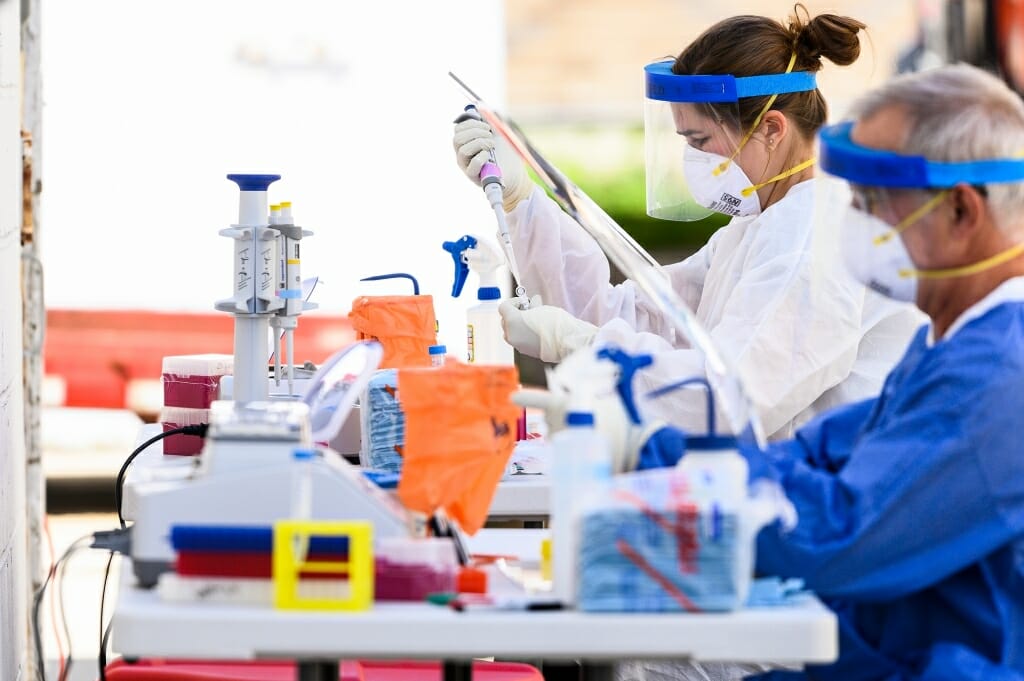 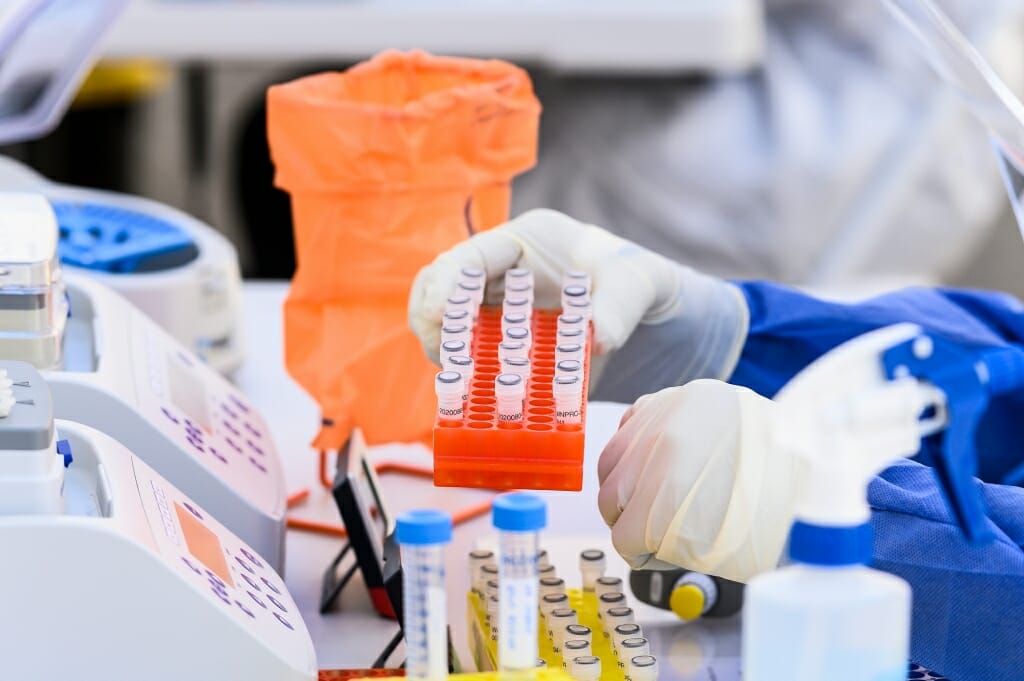 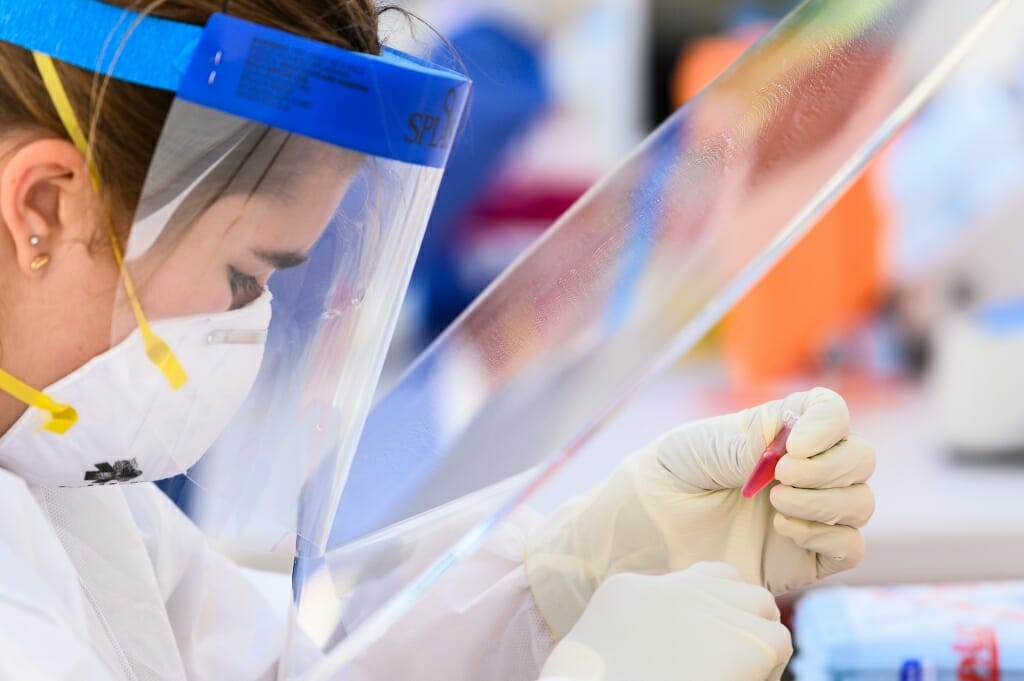 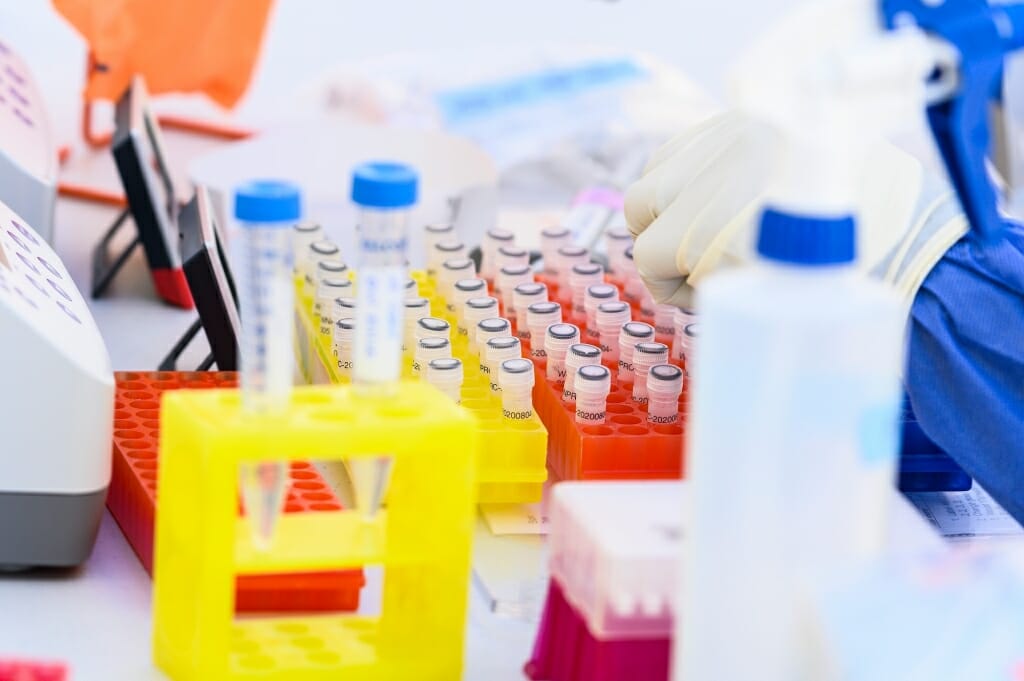 Vials of spit are collected from volunteers as part of the trial.

Volunteers at four sites in Madison are being tested for the virus that causes COVID-19 by spitting in a vial, which may prove faster, cheaper and less complicated than other common tests, according to University of Wisconsin–Madison researchers.

Scientists from UW–Madison’s AIDS Vaccine Research Laboratory, a team that in recent years has also turned its attention to COVID-19 and Zika virus outbreaks as need arose, have tuned a relatively simple genetic testing process to find evidence of the novel coronavirus in saliva.

With support from a National Institutes of Health grant program that hopes to expand testing in the United States by fall, the researchers have collected hundreds of samples from volunteers at three UW–Madison sites and a local elementary school. The tests were completed in hours, a stark contrast to common wait times of several days or even weeks for results from other kinds of COVID-19 tests. 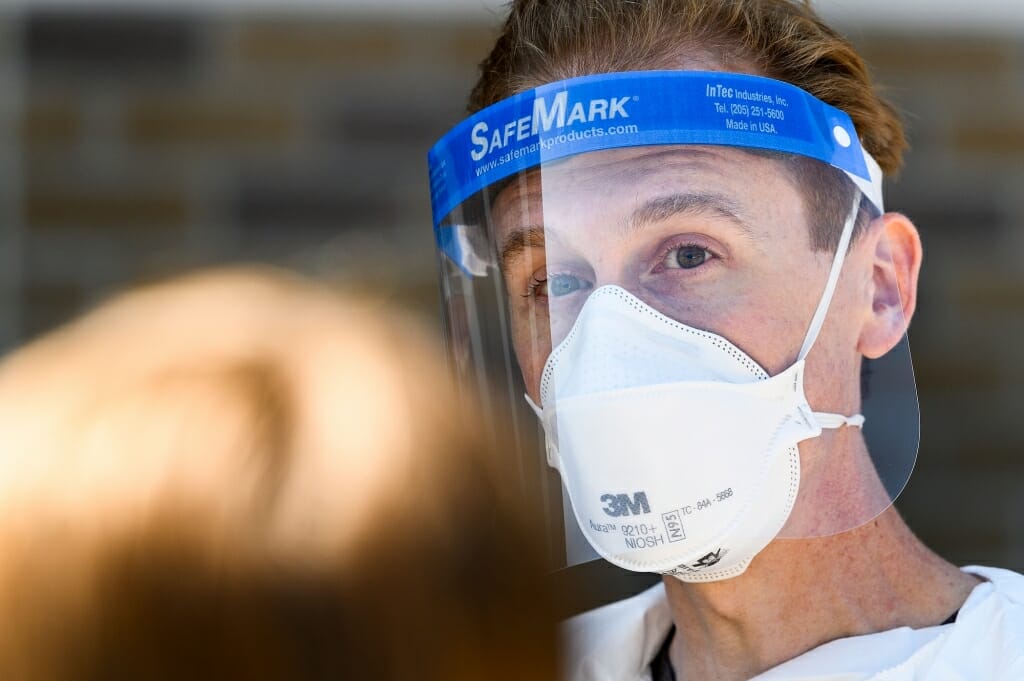 Tom Friedrich, professor in the UW School of Veterinary Medicine, explains a consent form and the process of volunteers spitting in a small vial as part of a trial of a new COVID-19 saliva test.

“This sort of testing, if it is successful and can be expanded, offers hope that schools and workplaces could receive rapid turnaround testing to assist in the complex decision of managing education during the outbreak with a test that is still sensitive enough to catch the people who are contagious, but exceptional in terms of accessibility, cost, and turnaround time” says David O’Connor, professor at the UW School of Medicine and Public Health.

They made their early findings available in late July in a brief study posted on medRxiv, a website for health sciences research that has not yet been peer-reviewed and published in a scientific journal. The test has not been approved for clinical diagnosis. The UW–Madison researchers are studying whether this type of test can be administered frequently and efficiently.

“Recent studies show that frequent, repeated testing is key to detecting infected people quickly,” says Tom Friedrich, professor in the UW School of Veterinary Medicine. “Because people can be contagious before they show symptoms of COVID-19, rapid testing can allow them to isolate and protect others before they even realize they are infected.”

The project started in February — even before the first COVID-19 cases appeared in Madison — when O’Connor and Friedrich were working with UW Hospital and Clinics to see if recent flu-like illnesses were actually the new virus.

“We were interested in knowing whether there was silent spread of the virus in Madison,” says O’Connor. “Fortunately, diagnostic testing became available very quickly. We shifted gears to adapting an alternative type of nucleic acid testing.”

Most testing for SARS-CoV-2, the virus that causes COVID-19, uses a chemical process called polymerase chain reaction, or PCR, to make copies of the genetic material in a small sample so they are easier to identify. The Madison group employs a different method, called reverse-transcriptase loop-mediated isothermal amplification (RT-LAMP) to amplify the identifiable parts of virus available in saliva samples.

“The advantage of RT-LAMP is that it is easier to set up than PCR, and doesn’t require specialized instrumentation,” O’Connor says. “We realized that this sort of testing might be more appropriate for places like workplaces, schools and nursing homes that might require on-site, frequent, repeated testing.”

RT-LAMP also uses different chemicals than the PCR process, which has become so vital to pandemic testing that supply chains and manufacturing capacity have been stretched thin. And RT-LAMP requires fewer steps, using simpler and less expensive instrumentation than PCR.

“I set up an (RT-LAMP kit) one Saturday afternoon and confirmed that indeed we could do the assay,” says AVRL scientist Dawn Dudley. “However, it soon became clear that this technique was not as sensitive as PCR — especially in its easiest form.”

Both PCR and RT-LAMP processes work better if the genetic material — the nucleic acids that make up DNA and RNA — are separated from the rest of the stuff in saliva, but the simplest version of RT-LAMP skipped that step. David Beebe, a UW–Madison pathology professor with experience in putting lab tests on small, reproducible chips, and Salus, the Madison-based spinoff company he helped create in 2013, joined the group to design and produce an extraction process that would work outside lab settings and make the RT-LAMP test much more accurate with a small saliva sample.

Dudley and scientist Christina Newman spent months adapting the test for saliva, because the group expected people would get pretty tired of the common sampling method, a swab (now also in short supply) run sometimes deep into the nose. 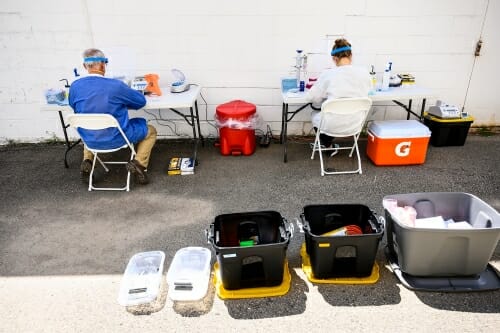 “Collection is more comfortable, which is especially important if you are getting tested twice a week and important for children,” Dudley says. “Swabs can be quite invasive and somewhat damaging over time. Spitting into a tube? Not so bad.”

Newman also set up the testing sites — including AVRL and the Wisconsin National Primate Research Center — where the researchers unload their gear from a minivan twice a week and collect samples across a folding table from as many as 60 people on some days.

“Basically, people come, sign the consent, and spit into a tube that is left in a cooler,” Dudley says. “It takes less than five minutes.”

With small groups, processing can be finished, results read via a color change in the test tube and delivered in a matter of hours — and probably without a team of lab-trained scientists.

Other groups are also testing the effectiveness of the new test. Chris Mason, a UW–Madison alum who is now a professor at Cornell University, is running a trial of his lab’s LAMP-based test with city workers in Racine, Wisconsin, where the collecting and processing is done mostly by firefighters. Salus is working on a commercial version of the test that can be deployed in small, mobile labs that Newman says could be straightforward enough to be operated by people without lengthy lab science training.

The researchers have run more than 400 tests, finding two positive cases and one that may be a false positive. Each result — positive and negative, save the potential false positive — has been confirmed later by checking the saliva sample with the clinical-lab-standard PCR testing. Because the RT-LAMP test is not yet approved for clinical diagnosis of COVID-19 infection, the researchers have UW Hospital and Clinics doctors contact volunteers who tested positive and advise them to get a PCR test as soon as possible.