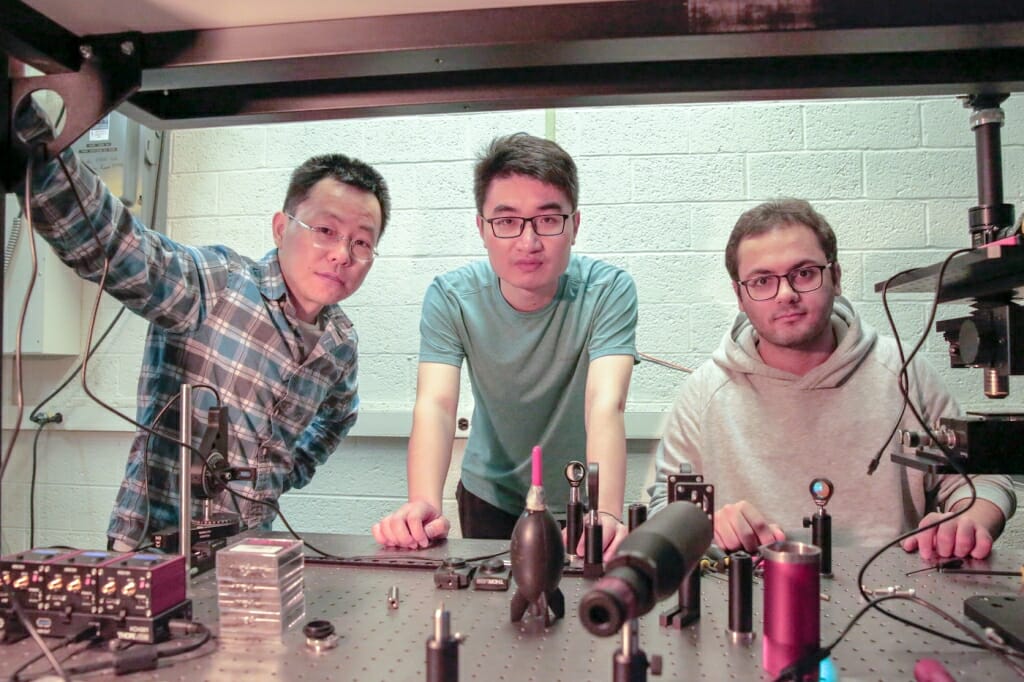 From left to right, Zongfu Yu, Ang Chen and Efram Khoram developed the concept for a “smart” piece of glass that recognizes images without any external power or circuits. Photo by Sam Million Weaver

The sophisticated technology that powers face recognition in many modern smartphones someday could receive a high-tech upgrade that sounds — and looks — surprisingly low-tech.

This window to the future is none other than a piece of glass. University of Wisconsin–Madison engineers have devised a method to create pieces of “smart” glass that can recognize images without requiring any sensors or circuits or power sources. 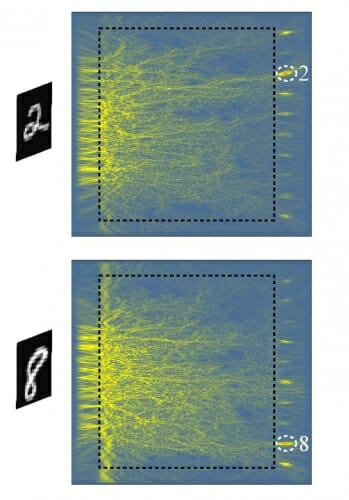 Light passing through “smart” glass is bent in a particular pattern depending on the scene, image or (in this case) written number facing the glass. If the light matches an expected pattern, the glass “recognizes” what it sees. Image courtesy Zongfu Yu

Yu and colleagues published details of their proof-of-concept research today in the journal Photonics Research.

Embedding artificial intelligence inside inert objects is a concept that, at first glance, seems like something out of science fiction. However, it’s an advance that could open new frontiers for low-power electronics.

Now, artificial intelligence gobbles up substantial computational resources (and battery life) every time you glance at your phone to unlock it with face ID. In the future, one piece of glass could recognize your face without using any power at all.

“This is completely different from the typical route to machine vision,” says Yu.

He envisions pieces of glass that look like translucent squares. Tiny strategically placed bubbles and impurities embedded within the glass would bend light in specific ways to differentiate among different images. That’s the artificial intelligence in action.

For their proof of concept, the engineers devised a method to make glass pieces that identified handwritten numbers. Light emanating from an image of a number enters at one end of the glass, and then focuses to one of nine specific spots on the other side, each corresponding to individual digits.

The glass was dynamic enough to detect, in real-time, when a handwritten 3 was altered to become an 8.

“The fact that we were able to get this complex behavior with such a simple structure was really something,” says Erfan Khoram, a graduate student in Yu’s lab.

Designing the glass to recognize numbers was similar to a machine-learning training process, except that the engineers “trained” an analog material instead of digital codes. Specifically, the engineers placed air bubbles of different sizes and shapes as well as small pieces of light-absorbing materials like graphene at specific locations inside the glass.

“We’re accustomed to digital computing, but this has broadened our view,” says Yu. “The wave dynamics of light propagation provide a new way to perform analog artificial neural computing”

One such advantage is that the computation is completely passive and intrinsic to the material, meaning one piece of image-recognition glass could be used hundreds of thousands of times.

“We could potentially use the glass as a biometric lock, tuned to recognize only one person’s face” says Yu. “Once built, it would last forever without needing power or internet, meaning it could keep something safe for you even after thousands of years.”

Additionally, it works at literally the speed of light, because the glass distinguishes among different images by distorting light waves.

“We could potentially use the glass as a biometric lock, tuned to recognize only one person’s face”

Although the up-front training process could be time consuming and computationally demanding, the glass itself is easy and inexpensive to fabricate.

In the future, the researchers plan to determine if their approach works for more complex tasks, such as facial recognition.

“The true power of this technology lies in its ability to handle much more complex classification tasks instantly without any energy consumption,” says Ming Yuan, a collaborator on the research and professor of statistics at Columbia University. “These tasks are the key to create artificial intelligence: to teach driverless cars to recognize a traffic signal, to enable voice control in consumer devices, among numerous other examples.”

Unlike human vision, which is mind-bogglingly general in its capabilities to discern an untold number of different objects, the smart glass could excel in specific applications — for example, one piece for number recognition, a different piece for identifying letters, another for faces, and so on.

“We’re always thinking about how we provide vision for machines in the future, and imagining application specific, mission-driven technologies.” says Yu. “This changes almost everything about how we design machine vision.”

UW–Madison graduate students Ang Chen and Dianjing Liu also contributed to the research, with Qiqi Wang of the Massachusetts Institute of Technology.

This work was supported by a Young Faculty Award grant from the Defense Advanced Research Projects Agency.