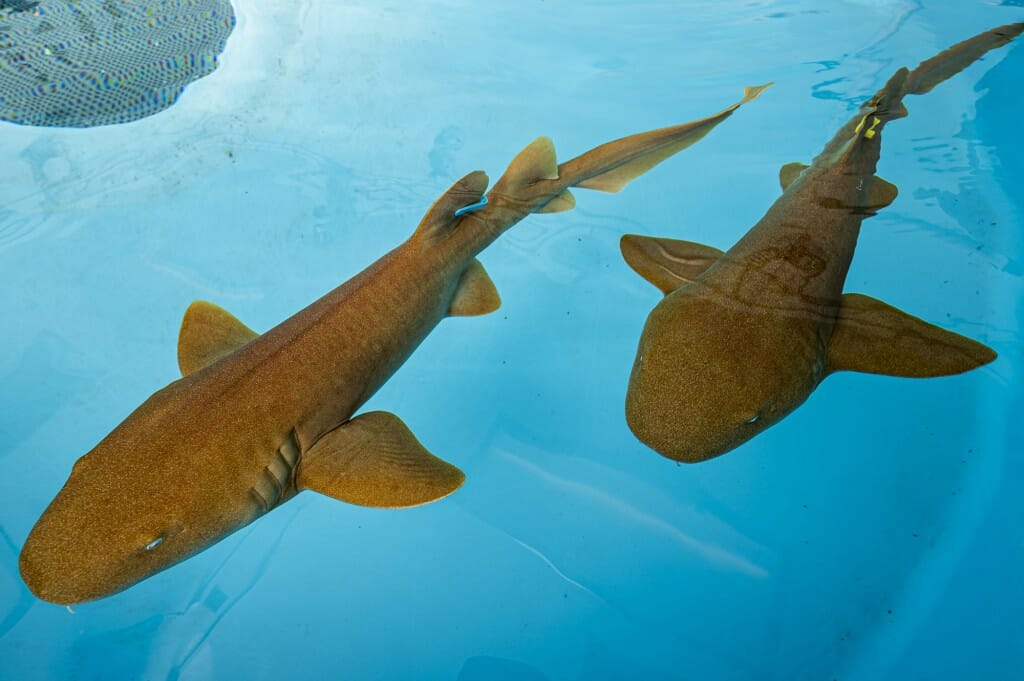 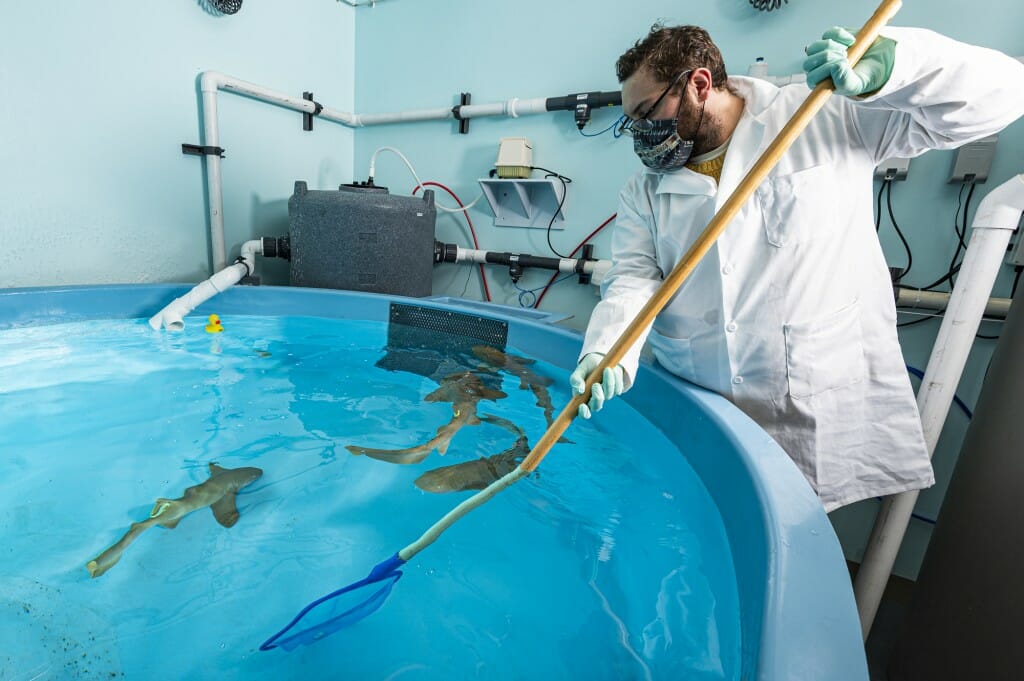 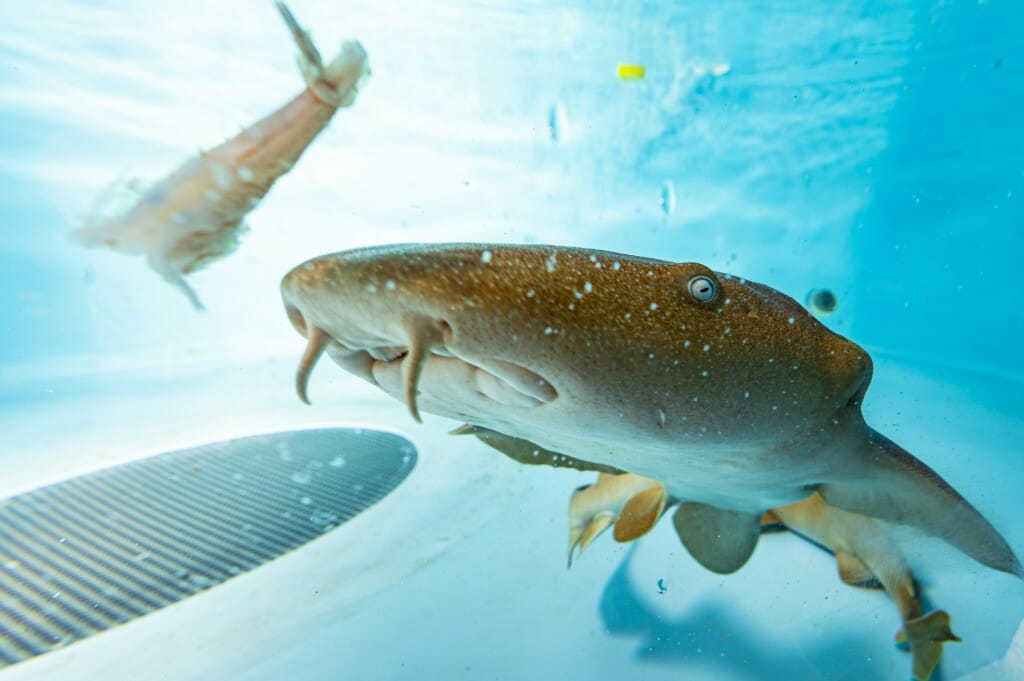 “What we’re doing is preparing an arsenal of shark VNAR therapeutics that could be used down the road for future SARS outbreaks," says researcher Aaron LeBeau. Photo by: Bryce Richter 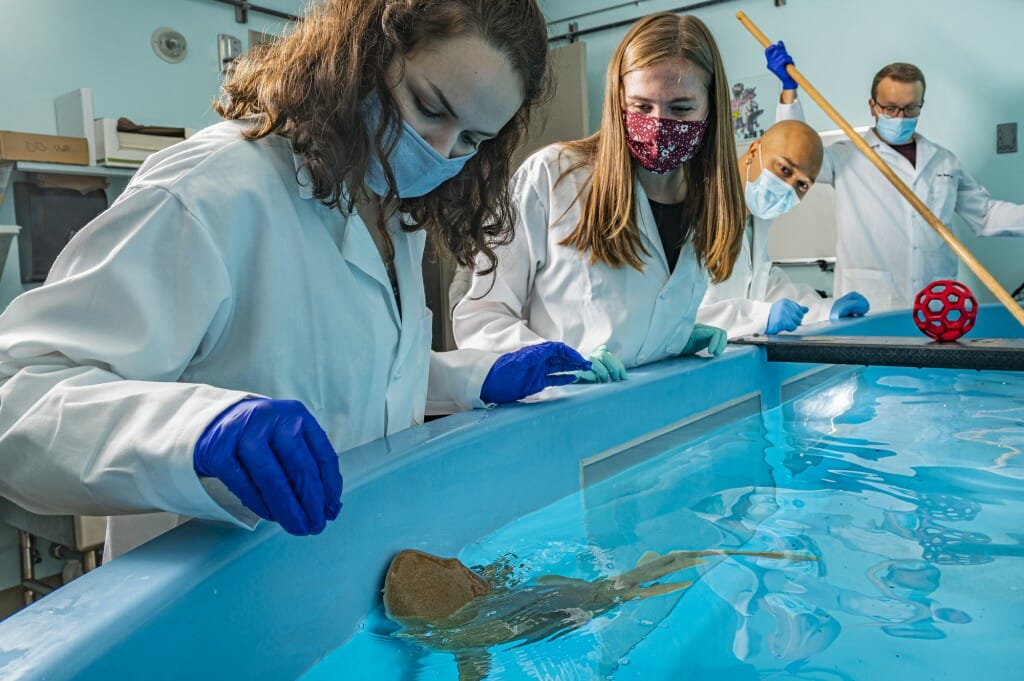 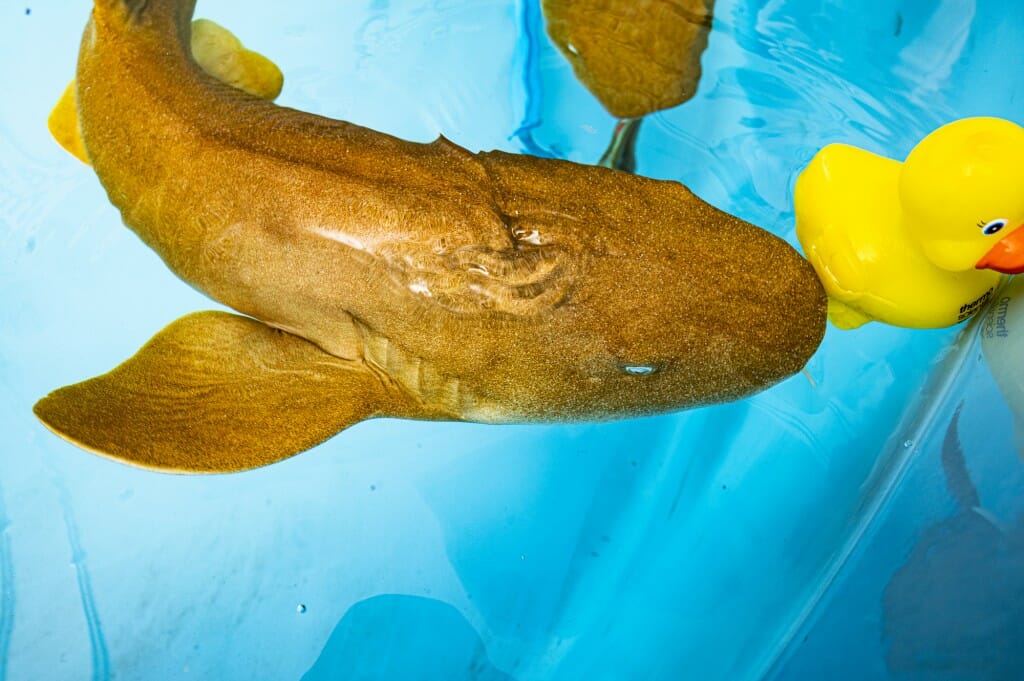 While they won't be a treatment for the current pandemic, the shark antibodies can help prepare for the coronaviruses of the future that have yet to jump to people. Photo by: Bryce Richter 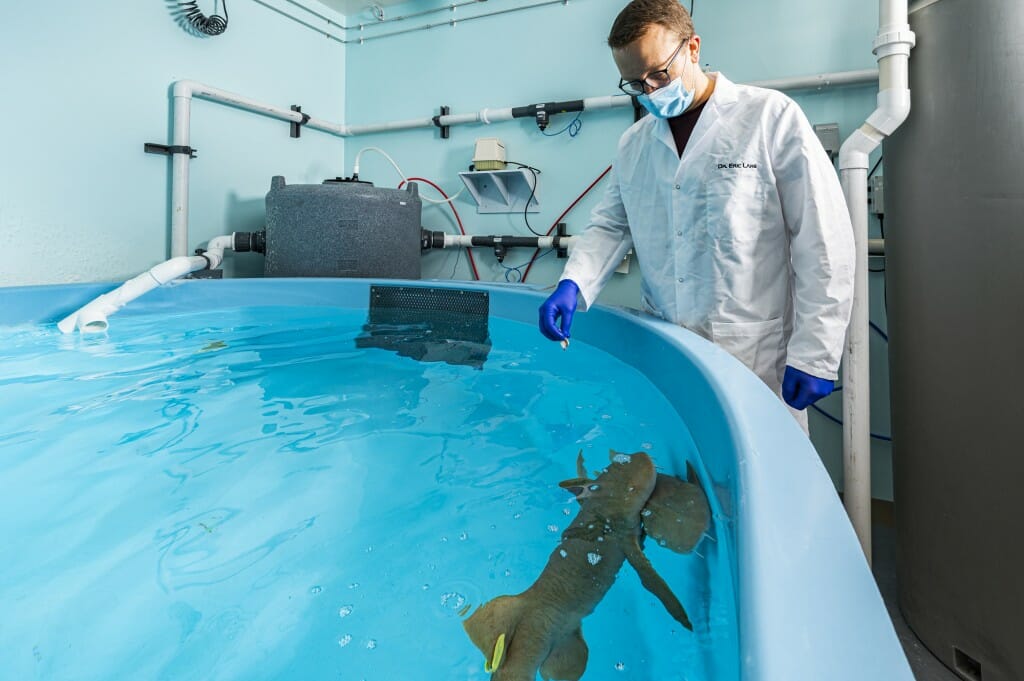 Eric Lake of the Department of Pathology and Laboratory Medicine is part of a team that discovered new potential drug molecules against SARS-CoV-2 in sharks. Photo by: Bryce Richter

Small, unique antibody-like proteins known as VNARs — derived from the immune systems of sharks — can prevent the virus that causes COVID-19, its variants, and related coronaviruses from infecting human cells, according to a new study published Dec. 16.

The new VNARs will not be immediately available as a treatment in people, but they can help prepare for future coronavirus outbreaks. The shark VNARs were able to neutralize WIV1-CoV, a coronavirus that is capable of infecting human cells but currently circulates only in bats, where SARS-CoV-2, the virus that causes COVID-19, likely originated.

Developing treatments for such animal-borne viruses ahead of time can prove useful if those viruses make the jump to people.

“The big issue is there are a number of coronaviruses that are poised for emergence in humans,” says Aaron LeBeau, a University of Wisconsin–Madison professor of pathology in the Carbone Cancer Center who helped lead the study. “What we’re doing is preparing an arsenal of shark VNAR therapeutics that could be used down the road for future SARS outbreaks. It’s a kind of insurance against the future.”

LeBeau and his lab in the School of Medicine and Public Health collaborated with researchers at the University of Minnesota and Elasmogen, a biomedical company in Scotland that is developing therapeutic VNARs. The team published its findings in Nature Communications. 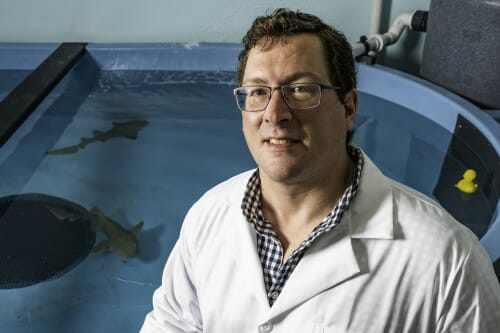 The anti-SARS-CoV-2 VNARs were isolated from Elasmogen’s large synthetic VNAR libraries. One-tenth the size of human antibodies, the shark VNARs can bind to infectious proteins in unique ways that bolster their ability to halt infection.

The researchers tested the shark VNARs against both infectious SARS-CoV-2 and a “pseudotype,” a version of the virus that can’t replicate in cells. They identified three candidate VNARs from a pool of billions that effectively stopped the virus from infecting human cells. The three shark VNARs were also effective against SARS-CoV-1, which caused the first SARS outbreak in 2003.

One VNAR, named 3B4, attached strongly to a groove on the viral spike protein near where the virus binds to human cells and appears to block this attachment process. This groove is very similar among genetically diverse coronaviruses, which even allows 3B4 to effectively neutralize the MERS virus, a distant cousin of the SARS viruses.

The ability to bind such conserved regions across diverse coronaviruses makes 3B4 an attractive candidate to fight viruses that have yet to infect people.

The 3B4 binding site is also not changed in prominent variations of SARS-CoV-2, such as the delta variant. This research was conducted before the omicron variant was discovered, but initial models suggest the VNAR would remain effective against this new version, LeBeau says.

“What we’re doing is preparing an arsenal of shark VNAR therapeutics that could be used down the road for future SARS outbreaks. It’s a kind of insurance against the future.”

The second-most-powerful shark VNAR, 2C02, seems to lock the spike protein into an inactive form. However, this VNAR’s binding site is altered in some SARS-CoV-2 variants, which likely decreases its potency.

“What is exciting is that these new potential drug molecules against SARS-CoV-2 differ in their mechanism of action compared to other biologics and antibodies targeting this virus,” says Caroline Barelle, CEO of Elasmogen. “It is another great example of how Elasmogen can effectively deliver potent therapeutic molecules.”

Future therapies would likely include a cocktail of multiple shark VNARs to maximize their effectiveness against diverse and mutating viruses. This new class of drug is cheaper and easier to manufacture than human antibodies, and can be delivered into the body through various routes, but has yet to be tested in humans. LeBeau is also studying the ability of shark VNARs to help in the treatment and diagnosis of cancers.

Vaccines form the bedrock of protection against SARS-CoV-2 and future coronaviruses. But some people, such as those with compromised immune systems, do not respond as well to vaccination and may benefit from other treatments like antibodies — which makes developing these treatments an ongoing priority.