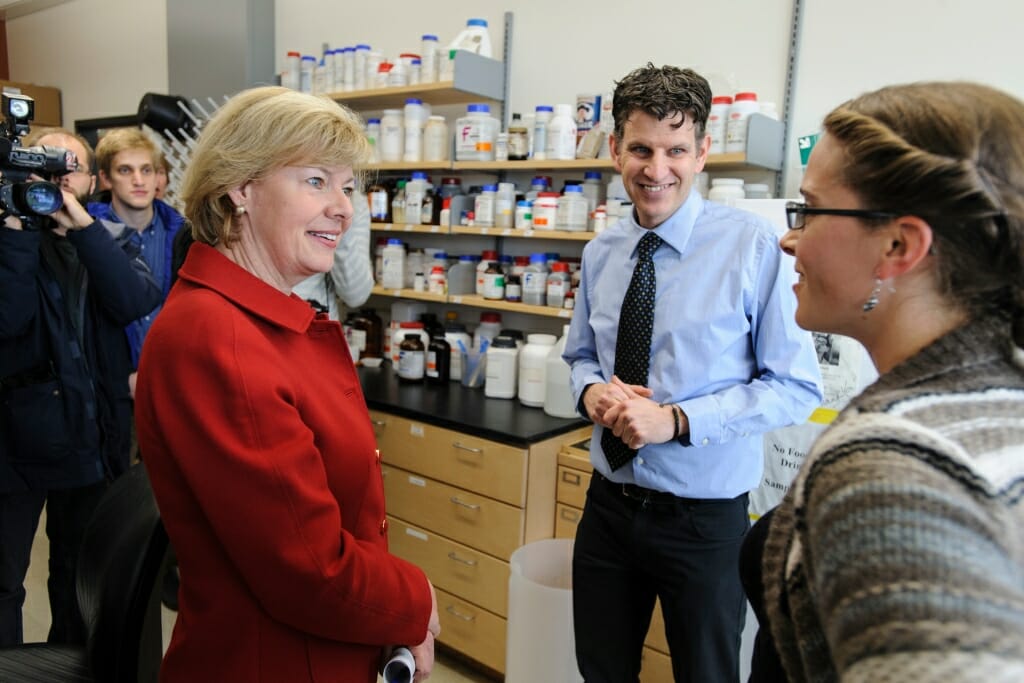 U.S. Sen. Tammy Baldwin talks with professors and students during a visit to the Microbial Sciences Building in 2013. Photo: Jeff Miller

U.S. Senator Tammy Baldwin has been named a 2020 Champion of Science by The Science Coalition (TSC), a nonprofit, nonpartisan organization of more than 50 of the nation’s leading public and private research institutions dedicated to highlighting the partnerships between the federal government and America’s research universities.

The award honors members of Congress whose actions and votes consistently reflect their commitment to fundamental science through funding investment for federal research agencies.

Sen. Baldwin was jointly nominated for the award by the University of Wisconsin–Madison and Marquette University, both members of TSC, for her support of fundamental scientific research. She’s a leader on the Senate Committee on Commerce, Science and Transportation.

“We appreciate Senator Baldwin’s continued support of fundamental scientific research, which helps advance the work of the many students, researchers and professors at UW–Madison,” said Chancellor Rebecca Blank. “Through her leadership, she has shown the importance of investments in research, science and innovation to state’s economy.”

In addition to supporting science research while in office, Baldwin has close ties to the UW–Madison campus. Raised in Madison by her grandparents, she would often visit the university’s Enzyme Institute, where her grandfather, David E. Green, was the original director.

Since 1999, more than 100 members of Congress have been recognized with the Champion of Science Award for their efforts to secure federal funding for fundamental scientific research – through their voting records, bill sponsorships, letters of support, or other activities aimed at boosting scientific discovery. Awardees were selected both for their support of research institutions and their tireless efforts to ensure fundamental scientific advancement across all disciplines.