Researchers investigate how a stressed brain can make asthma worse 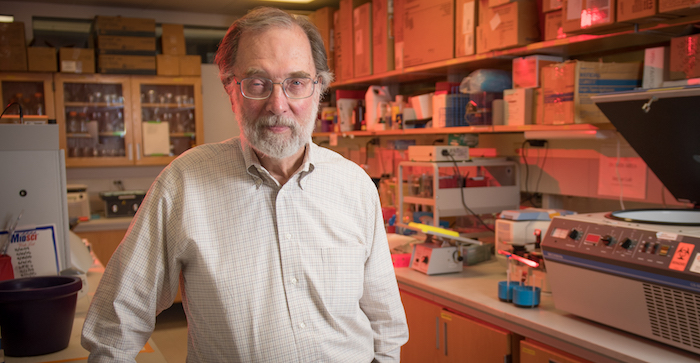 William Busse, a professor of asthma, pulmonary and critical care medicine at the UW–Madison School of Medicine and Public Health, is looking at connections between the immune system and the brain. Clint Thayer/Department of Medicine

Researchers at the University of Wisconsin–Madison are investigating cross-talk between the brain and lungs of people with asthma in a four-year, $2.5 million study to understand how psychological stress can make asthma symptoms worse.

Through a clinical study called AsthMatic Inflammation and Neurocircuitry Activation, or MINA, the team hopes to decipher exactly how mind and body connect when people with asthma experience stress and find ways to alter brain-lung communication to help them manage their disease. 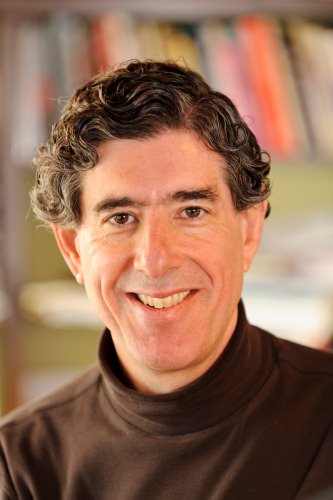 The effort is led by two groups with international reputations in the two areas united by the study: a team led by William Busse, a professor of asthma, pulmonary and critical care medicine at the UW–Madison School of Medicine and Public Health and a team headed by Richard Davidson, William James and Vilas Professor of Psychology and Psychiatry at the UW-Madison Center for Healthy Minds.

A project 20 years in the making

The new study represents a partnership between Busse and Davidson that extends back to 1995, when the pair participated in a scientific meeting focused on how stress may alter a person’s susceptibility to worsening asthma.

Combining their expertise, the researchers conducted work that hinted at connections between the nervous system, the immune system and asthma, a chronic lung disease that causes wheezing, shortness of breath, and acute attacks called exacerbations that can be deadly if not managed properly.

“Our efforts brought together two areas of research not commonly linked,” Busse says. So far, their collaboration has led to a series of studies joining these once disparate fields.

“The fact that psychosocial stress can provoke an exacerbation of asthma symptoms clearly indicates that the brain must be involved since it is the brain that transduces stressful events into biological signals that ultimately influence lung function,” Davidson says.

Their endeavors open entirely new ways of looking at asthma that could have profound affects for patients living with the disease.

“My greatest hope for this study is that our knowledge about the way that the brain and immune system interact in asthma is refined so that we can start tweaking how we treat the disease, and offer different and better treatment modalities,” says Melissa Rosenkranz, an associate scientist in Davidson’s laboratory who leads the brain scan experiments for the study.

Poking the brain and probing the lung

The MINA study, funded by the National Institutes of Health, is considerably larger and more comprehensive than prior investigations. 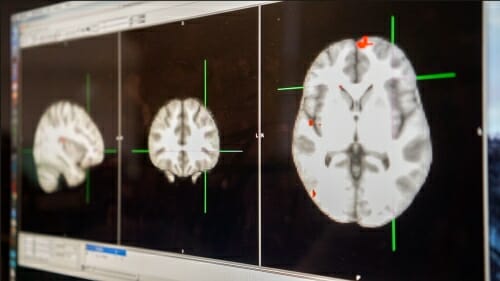 The study uses imaging of the brain to see how it’s affected by a provocation of the immune system.

In the first part of the study, the research team will investigate lung-to-brain communication in research subjects with mild to moderate asthma.

Asthma and pulmonary clinicians will characterize the subjects’ disease by measuring their lung function and analyzing features of airway inflammation. They accomplish this by placing a small amount of a substance each subject is allergic to, such as ragweed or cat dander, into an isolated part of their airway to trigger allergic inflammation without activating an asthma attack, Rosenkranz explains.

The subjects will then undergo functional MRI scans to assess activity in areas of their brains, particularly those which might be responsive to stress.

About 48 hours later – while the inflammatory response is at its peak – each study participant will undergo another functional MRI during which they will be asked to perform tasks, like naming the color of asthma-related words presented on a screen, in order to activate specific brain pathways.

“You can think of it as a way to probe the reactivity of these brain regions, says Rosenkranz, who studies links between the nervous and immune system, as well as the biochemical mechanisms underlying resilience or vulnerability to disease.

These regions of the brain, or neurocircuits, can then be evaluated in relation to the development of allergic inflammation.

“What is signaling the brain when you have inflammation in the lungs,” Rosenkranz asks. “How does the brain respond, and what are the consequences?”

Scientists will also use standard psychological questionnaires to determine subjects’ chronic life stress levels and evaluate them for depression or anxiety, producing what Rosenkranz says is “a rich set of psychological information on these subjects.” 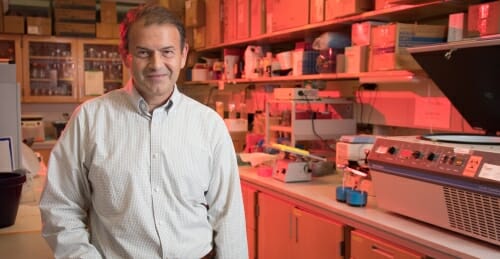 Stephane Esnault, a senior scientist, wll conduct a battery of tests to quantify how much inflammation is occurring in lung cells and tissue when the immune system is provoked. Clint Thayer/Department of Medicine

Researchers will also collect a treasure trove of cellular and molecular data on each study participant. Subjects will provide lung fluid and cell and blood samples to pulmonary scientists like Stephane Esnault, a senior scientist in the Busse laboratory, who will use them to conduct a battery of tests to quantify how much inflammation is occurring in lung cells and tissue.

The project will also involve a molecular analysis technique called RNA-seq, which will help researchers identify which genes are activated in each study subject. “RNA-seq will help us find new molecular pathways involved in this process that we don’t know about yet,” Esnault says.

Putting the pressure on

To do this, study volunteers with mild-to-moderate asthma will undergo a socially stressful laboratory experiment, akin to making a public speech in front of an unfriendly crowd, Rosenkranz explains.

Using a technique already described in a 2016 study conducted by the team, researchers will then identify regions of the brain that activate metabolically during the experiment.

Next, research subjects will return to the clinic, where a pulmonology team will administer a whole-lung challenge, inducing inflammation. They will track lung function and gather samples over the following 24 hours, following up on research findings from 2016 to determine whether priming the lung with inflammation leads to a more severe response to allergens, says Rosenkranz.

She is confident the effort will yield valuable data and yield new and meaningful insight into the mind-lung connection in asthma.

For Busse, the results could help him and others improve treatments for asthma patients, he says. With better information about immune responses in the lung and how they affect the brain, “I might treat an asthma patient differently,” perhaps looking to the brain to manage their lung responses, Busse says. This could include mindfulness training.

“Certain forms of meditation can alter brain circuits that include those we have found to be associated with inflammation in the lung,” says Davidson. “We reasoned that meditation might be helpful in reducing symptoms of asthma through its impact on these neural circuits.”

For Busse, the MINA study represents the culmination of decades of work, and a new frontier.

“For years, psychological aspects of disease were not appreciated, and the influence of the mind on asthma was often referred to as ‘just being in your head,’” he says. “We now appreciate that definite links exist between asthma and activities in the brain. How these linkages work promises new insights into how to more effectively treat asthma.”