Research by team of grad students cited in Mueller Report

The Mueller report dominated news coverage last week. But one thing missing from the headlines? Research cited in the 448-page document was done by a team of graduate students at UW–Madison. 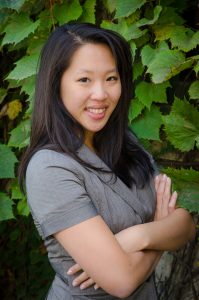 Fittingly, Lukito, the lead author, got the news via Twitter while taking a preliminary exam. Yes, she was surprised and excited – but first she had to finish her exam.

“It took a long time for the importance to sink in,” she says. “I probably didn’t really process how awesome it was until that evening.”

Lukito was born and raised in New York City. She came to UW–Madison four years ago to pursue a doctorate in mass communications with minors in political science and English Language & Linguistics. She received a Master’s in Media Studies at Syracuse University and bachelor’s degree in Communication and Political Science at the State University of New York (SUNY), Geneseo. She wanted to come to UW–Madison, the place where both her undergraduate and master’s advisors graduated from the same program she’s currently in.

She first told Chris Wells, the former UW–Madison professor who is now at Boston University that she wrote the piece with. Then her research team. And finally, she told her mom.

“My mom has followed American politics for as long as she’s been naturalized, so I know she’d be following the report’s release closely,” Lukito says. “Everyone was pretty excited — I never expected to be referenced.”

I was 3 hours into my 8-hour prelim exam when I received this notification from @nausjcaa that my CJR piece with @cfwells was referenced in the Mueller Report (p. 27). ???? In the article, we discuss how and why Russian trolls were quoted as American citizens in news stories. 1/4 https://t.co/lYFi4raEwb

While many news stories mentioned her team’s research, very few mentioned it was done at UW–Madison. Still, she is thrilled that it’s serving as a reminder for news organizations to always check their sources, especially when those sources are tweets.

In between taking more prelims – her department has five that last eight hours each – Lukito took a moment to talk about her research and the road to the Mueller Report. 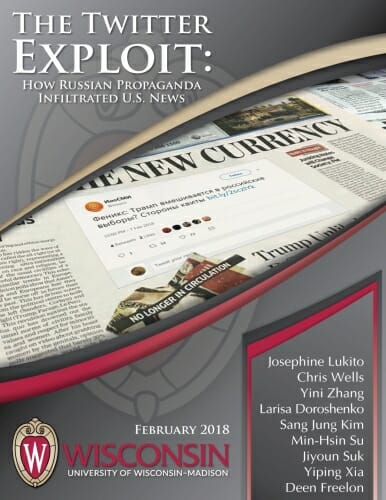 The cover of the team’s research report.

How did the research come about? So I’m part of this research group in our department (Journalism & Mass Communication) called the Social Media and Democracy group. When news stories started coming out about Twitter accounts from Russia pretending to be American citizens during the 2016 U.S. Presidential elections, a subset of us grad students were interested in the possibility that these accounts influenced political talk. We called these users “IRA accounts”; Mueller calls them “Russian trolls” (IRA stands for Internet Research Agency, the long-known Russian troll army that organized these Twitter accounts). Around November 2017, the House Intelligence Committee released a list of about two thousand accounts, which Twitter had identified as controlled by the Internet Research Agency.

Once we found this list, we became really interested in the possibility that these accounts were quoted by news organizations. One of the biggest trends in journalism now has been embedding tweets in news stories. There’s a great piece in the Nieman Lab by Shannon McGregor about the issues with embedding tweets in news before confirming the information is correct. We started with a list of 33 news outlets (liberal, conservative, digital, traditional–we tried to capture a lot of different “types” of media), and looked for articles that embedded a tweet from one of the IRA accounts identified (we looked for articles published between 2015 and 2017). Though we have a faculty advisor, our research is very student-driven. Students collect the data, write the papers and do the analysis, and all our papers are student-led.

What did you think you might find? Were you surprised by what you actually did? We figured there would be a few articles, but what we were really shocked by was the number of outlets that had at least one article with an IRA tweet. We’ve expanded the list to over 100 outlets now, and the majority of those outlets still had at least one article with an IRA tweet. We considered this a broad, but shallow, influence — IRA tweets appeared in a lot of news stories, but usually only a few times. Some outlets, like Huffington Post and Daily Caller, had more than 10 articles with IRA tweets. The other thing we learned from our analysis was that these tweets shared partisan opinions, and not really news stories. In other words, news stories were quoting IRA tweets because these tweets shared strong partisan opinions.

For those who may not be familiar with your research, what would you like them to know? I think there is often a misconception that these Russian trolls are “bots” or AI algorithms. While some accounts are automated bots that retweet things, the tweets we were looking at were not produced by bots. Instead, they’re made by employees of the Internet Research Agency, who are paid to write English-language tweets. The strategy overall is kind of like a cyborg. Part of it is influenced by technology. For example, we know that the IRA studies audience metrics, and uses bots to artificially boost retweets, shares, or likes of certain posts. However, “digital disinformation” is also a very human process. Humans are the ones who write the message and make decisions about who to target.

I also want people to know about the good that has come out of this research. Journalists are taking this issue really seriously, and they want to find ways to incorporate digital media into news stories responsibly. Continued work between journalists and academics would help in that endeavor.

What are you working on next? Our research team is working on a couple of different projects now. Some of them are still focused on IRA activity on Twitter. For example, a team led by Ph.D. candidate Yini Zhang is analyzing whether being quoted in a news story increased the IRA account’s follower count. In other words, did IRA accounts, or Russian trolls, gain followers as a result if being quoted in news stories? Another is looking at whether certain linguistic features or topics increased retweet activity of IRA tweets; this project is being led by Ph.D. student Jiyoun Suk. One study is looking at a specific account: Jenn_Abrams (Yiping Xia, the Ph.D. student leading this project, has a great mixed method analysis of her content). Another study, being led by Larisa Doroshenko, is studying Russian troll activity during Euromaidan in Ukraine, which gives our research a really interesting international comparison.

How did you get interested in this area to begin with? I’ve been doing international communication research for about five or six years now. As an undergrad student, I thought about being a journalist (like an international correspondent). But when I started doing research about that news coverage … that’s when I realized I was really passionate about studying journalism. I think a lot of my work also benefits from being relevant to the real world, and I’m super excited whenever I get to talk to anyone in journalism about what I do.

Being a grad student is a lot of work. Any words of wisdom for your fellow grad students or for those thinking about pursuing an advanced degree? Research definitely is hard. I benefit a lot from having a great research team, with a variety of skills from different disciplines and methods. If you can find (or build) a good research team, you can ask a lot of interesting interdisciplinary questions. Another thing I’d emphasize is taking breaks! I definitely suffer from “academic guilt” when I feel guilty about not doing work. Sometimes, I really have to persuade myself that taking breaks is okay. But it’s incredibly important for me to be able to step away from my work every once in a while.