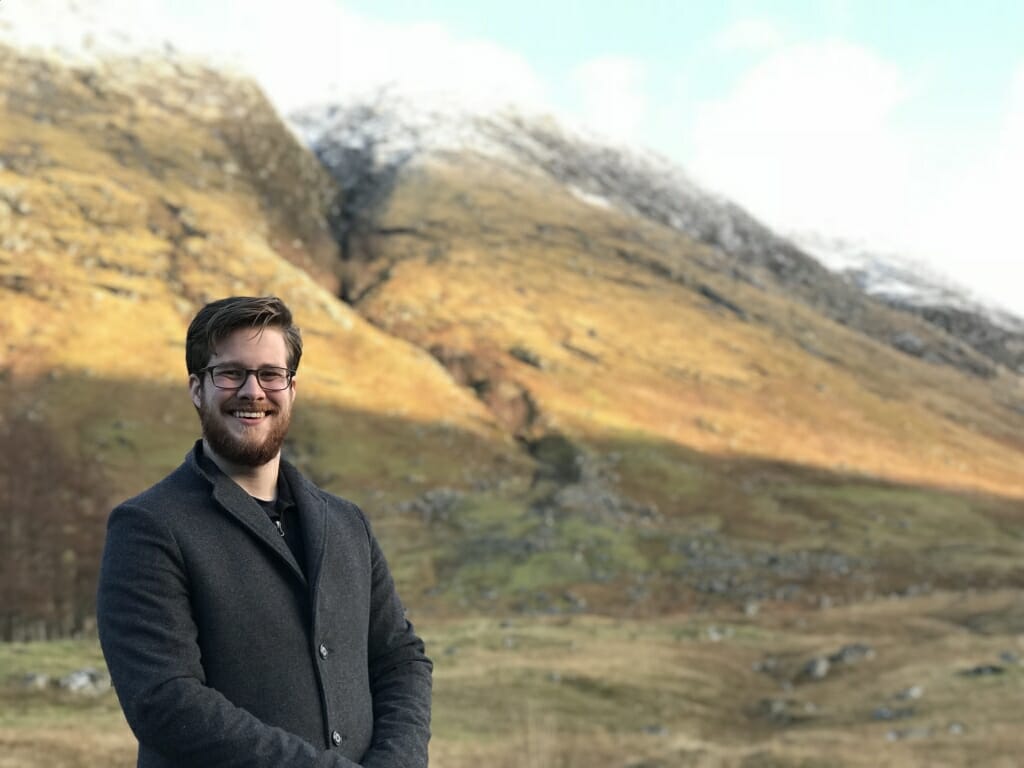 Kelton Halbert is pursuing a Ph.D. in high resolution weather prediction modeling, and he also likes to chase storms as a hobby. UW-Madison

From February through June, we will be highlighting the ways that UW–Madison changes lives for the better throughout the state of Wisconsin. March’s theme is Working for Rural Wisconsin. Watch for more at #UWChangesLives on social media. And here’s how you can help.

But funding only tells part of the research success story. In fact, research at UW is changing student lives in profound, and sometimes even unexpected ways.

A passion for weather

Kelton Halbert has a stormy relationship with UW.

He is pursuing a Ph.D. in high resolution weather prediction modeling. He’s also a storm chaser hobbyist and his photo of more than a dozen twisters won a recent Space Science and Engineering Center (SSEC) photo contest.

Halbert was an undergraduate studying meteorology at the University of Oklahoma when he was invited to present at a National Weather Association conference. Wayne Feltz, senior scientist and executive director of UW–Madison’s Cooperative Institute for Meteorological Satellite Studies (CIMSS) at SSEC, stopped Halbert at the conference to discuss graduate school plans. Two weeks later, Feltz invited Halbert to UW to give a talk on a piece of software that Halbert wrote called SHARPpy, a program that looks at severe weather forecasting and is a way of displaying information.

“UW–Madison was not in my plans, but I fell in love with Madison during that visit and met Leigh Orf (associate scientist with CIMSS) who does severe thunderstorm and tornado research resolution modeling using super computers,” Halbert recalls.  “Today, Leigh is my advisor and nobody is doing the research that Leigh is.”

Using real-world observational data, Orf’s research team studies weather conditions present at the time of large storms that spawn EF5 tornados. Halbert grew up in Tennessee in a family that was interested in extreme weather and tornadoes. In fact, he chased his first storms with his mother. Most of his family, though, are musicians.

“The joke is that I’m the rebellious son who went on to a steady career path,” he says. “And it’s my research at UW–Madison that has put me solidly on that path.”

A love for medical research

Heidi Kletzien is a predoctoral fellow in the Department of Biomedical Engineering with a minor in Communication Sciences and Disorders. She heads to Harvard this fall to begin post-doc work. It’s a bittersweet move for a woman, who unlike Halbert, always knew she would be a Badger. 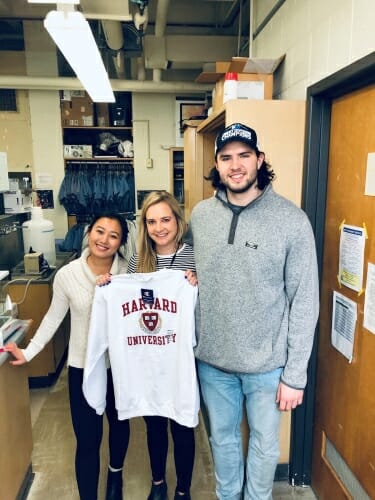 Heidi Kletzien is headed to Harvard for post-doctoral work, after doing research at UW–Madison. Photo courtesy of Heidi Kletzien

Kletzien, from Manitowoc, explains that her family members are all Badgers, starting with her great grandparents – Florence and Marty Below, who was an All American football player for the Badgers.

For Kletzien, ice hockey is the sport of choice. She started playing when she was 5 and grew up going to every Badger game. As a UW freshman, she did just what she had dreamed of doing when she joined the Badger women’s hockey team under Coach Mark Johnson.

“To be able to wear that jersey was really special,” she says. “I’m very competitive and I wanted to attend a university where I would get a top notch education but I also wanted to have an opportunity to win a national championship.”

She got that wish when the team won back-to-back NCAA Division 1 National Championships in 2006 and 2007.

As an undergraduate, Kletzien balanced sports with courses in legal studies and political science. Then her academic focus took an unexpected turn her senior year.

“Mark Johnson always talked about how anatomy was one of his favorite courses on campus, so my senior year spring semester I decided to take anatomy,” Kletzien recalls. “I fell in love with the course, and at that point decided I needed to do something in medicine.”

She called her parents two weeks before graduation and told them she was shifting her focus to medicine. She also discussed her new found interest with athletic team doctor Lee Kaplan (now at University of Miami), and soon started working in his lab studying osteoarthritis. In Kaplan’s lab she discovered a love for research.

In 2009 she met Nadine Connor, associate vice chancellor for research policy and compliance in the Office of the Vice Chancellor for Research and Graduate Education, and a professor in the College of Letters & Science’s Department of Communication Sciences and Disorders and the School of Medicine and Public Health’s Department of Surgery.

“At the time I met Nadine, I wasn’t quite sure what a swallowing disorder was, but I thought, that if they were looking at muscles in the head and neck, as an athlete, muscles were something I understood.” Kletzien went on to become Connor’s lab manager.

Today, Kletzien’s research interest is in the underlying cellular mechanisms contributing to swallowing and voice disorders that occur with age and disease.

And just as her mentors helped her, she gives back to the community. She’s a volunteer hockey coach and was president of two student organizations – Optical Society of America and Society for Photonics and Instrumentation Engineering. She serves on the student advisory council for the national Dysphagia Research Society.

Two former athletes are among the undergraduates she has mentored. They are former Badger hockey player and med student at Penn State, Brittany Ammerman, and biomedical engineering student and former UW football player Patrick Kasl. Her goal is to help them find their research passion just as she found hers.

“I want to forever give back to what was given to me at UW–Madison,” she says.

Students of Gregg Mitman, interim director of the Center for the Humanities and professor of history, medical history and environmental studies, also are giving back by making life better for their home countries in Africa. 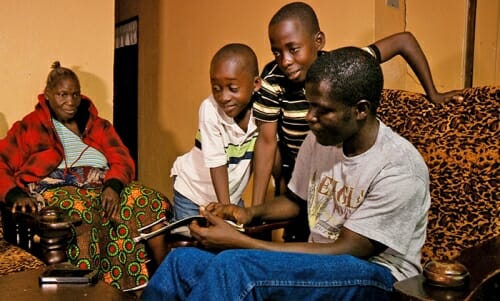 Emmanuel Urey, shown with his family, created two documentaries on Liberia while a graduate student at UW. Courtesy of Emmanuel Urey

Emmanuel Urey came to UW–Madison from Liberia in 2011 and graduated last May with a Ph.D. focus in the environment and resources.

“My passion drove me to come to UW–Madison and the Nelson Institute for Environmental Studies, which houses a land tenure institution that is known around the world,” Urey recalls.

While at UW, Urey and Mitman collaborated on two documentaries about Liberia, In the Shadow of Ebola and The Land Beneath Our Feet. After graduation, he has maintained strong ties to UW and serves as a project assistant for a website that he developed with Mitman, Liberianhistory.org.

At home, Urey is raising money to build a school and working for Landesa to implement the new Land Rights Act. He says his graduate experience at UW was geared toward informing that law, which protects land rights for more than 3 million indigenous Liberians.

“Coming to UW–Madison boosted my commitment to making the law possible,” he says. “I discovered people who are committed to the environment and who have a deep passion about the work they do in terms of reducing inequality in the world. They have been very encouraging and a motivating factor in my life.”

He also volunteers as the president of a newly accredited college, The Salvation Army Polytechnic in Liberia. Education with Integrity is the school’s motto and a widely held belief he says he also found at UW. 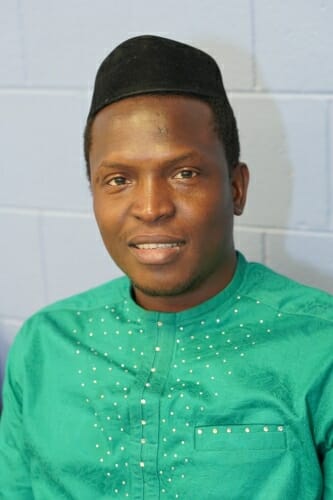 Ayodeji Adegbite came to UW–Madison from Nigeria to pursue a Ph.D. in the history of science, medicine and technology. His research focuses on global health history, with a particular interest in Africa. He became interested in infectious disease research while serving in Nigeria’s National Youth Service Corps. While in the corps, he was stationed in an area that experienced an Ebola outbreak.

“I came to my research with a lot of questions, but not a lot of direction,” Adegbite recalls. “Then I stumbled onto UW–Madison and found Gregg Mitman.”

Since coming to UW in August 2018, he has conducted a literature review on global health that has provided him with a broad knowledge of the history of health crisis in Africa.

“I want to be able to make an impact in Nigeria,” he says. “And I know that with my research at UW I will be able to find my way to make that happen.”