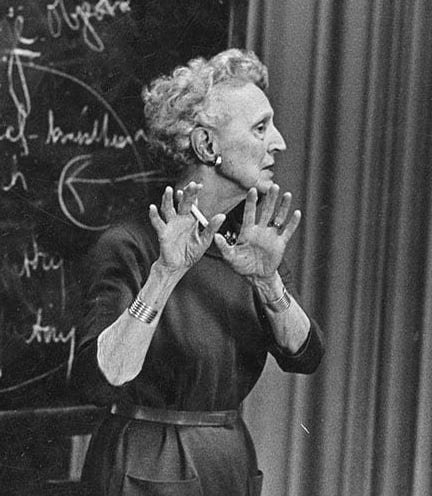 The photographs, visual art and films that fill Lathrop’s Gallery Space bear witness to dance pioneer Margaret H’Doubler’s radical pedagogy and its inherently Midwestern progressivism — when dance became a rigorous academic discipline and the body became the route to scientific inquiry, self-discovery, creativity and citizenship. Thanks to the leadership and vision of H’Doubler (pronounced DOE-blur), UW–Madison became the first university to offer a degree program in dance in 1926.

Items selected for the exhibition are drawn from numerous public and private collections that document H’Doubler’s continued influence across generations of dance artists.

“Margaret H’Doubler and her colleagues graduated many important artists,” said exhibition curator Ninotchka Bennahum, a professor of dance studies and intellectual history at the University of California, Santa Barbara. “In 1926, she was the first to hone an academic curriculum for a BS in physical (dance) education and succeeded in extricating the study of dance from technique and creative practice only to dance education as a rigorous academic discipline.”

This, Bennahum said, “offered students a professional future in dance.”

That legacy is clearly demonstrated by three prominent dance artists and UW graduates, also featured in this exhibition — each of whom have mobilized H’Doubler’s radical pedagogy and made remarkable contributions to American cultural history: Anna Halprin (’42), Mary Hinkson (’46, MS ’47), and Matt Turney (’47).

Halprin invented the ordinary body and task-based improvisation as material for a dance, ushering in postmodernism. Hinkson and Turney, co-founders of the Wisconsin Dance Group (1947-1951), became the first black dancers to join the Martha Graham Dance Company.

Hinkson was one of Graham’s leading dancers while with the company. In 1960, she became the first African-American woman to perform for George Balanchine in roles he created for her at New York City Ballet, she also taught at Juilliard, the High School of Performing Arts and the Alvin Ailey American Dance Theater.

Turney, who danced for Graham nearly two decades, was noted for her gift of stillness, which she demonstrated eloquently in Graham’s “Appalachian Spring.”

H’Doubler “succeeded in extricating the study of dance from technique and creative practice only to dance education as a rigorous academic discipline.”

Professor Kate Corby, chair of the School of Education’s Dance Department, who worked in consultation with Bennahum on the exhibition, says it is awe-inspiring to see the roots of dance in higher education — UW–Madison’s dance legacy — in the halls of Lathrop.

“We are beneficiaries of H’Doubler’s bold, progressive initiative,” she says. “Every student who has had the opportunity to study dance in college has done so because of her groundbreaking work and we are grateful to Jody and John Arnhold for their generous gift, making this exhibition possible.”

The exhibition was made possible through a donation from 1965 UW graduate Jody Gottfried Arnhold and John Arnhold. Jody Arnhold, a dance advocate and educator and founder of the Dance Education Laboratory (DEL) at 92Y, says UW–Madison was the nation’s first program to offer a major in dance “against all odds.” Although she was an English major at the UW, she says the dance program “inspired (her) to pursue a life in dance education” because her “heart was and is with H’Doubler and her understanding that dance is not just predetermined steps; it’s a philosophy, a history and a way of teaching children to find the artist within.”

The exhibition is open to the public for viewing during regular building hours. Lathrop Hall is located at 1050 University Ave.