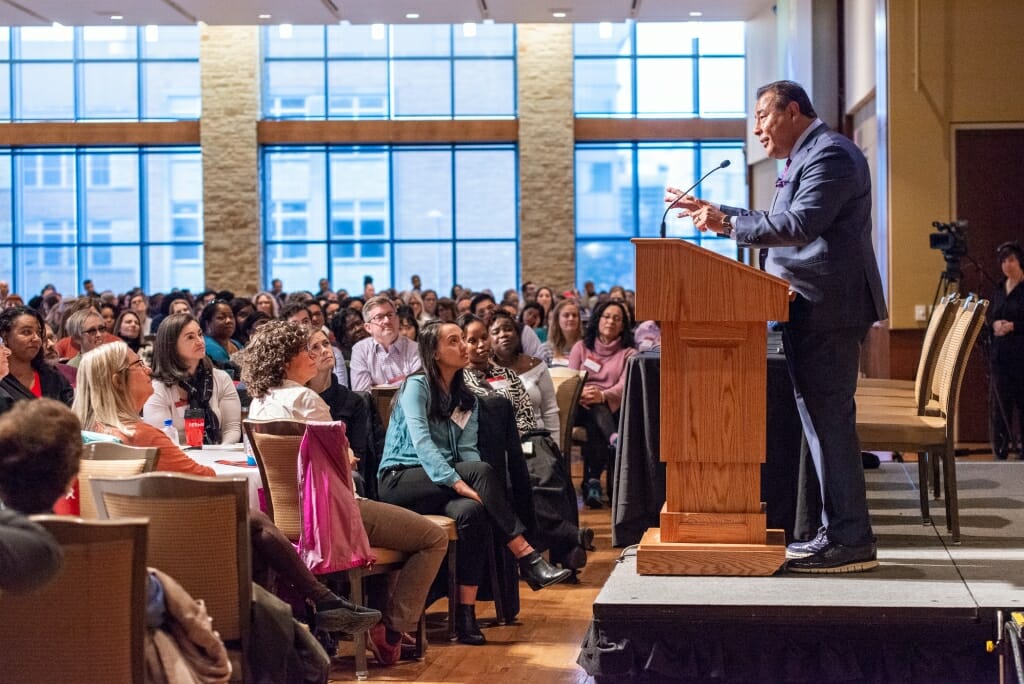 A TV journalist known for his hidden-camera work told a campus audience Tuesday that true character reveals itself in those moments when we think no one is watching.

“Every day we come face to face with moral and ethical dilemmas as we go about our lives,” ABC News correspondent John Quiñones told an overflow crowd of more than 1,200 at this year’s UW–Madison Diversity Forum. “The question is, what do you do with that opportunity to right a wrong? Do you sound an alarm and lend a helping hand, or do you just mind your own business and walk away?” 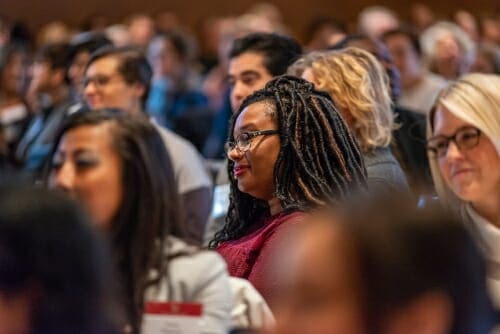 For 12 years and over the course of some 1,000 scenarios, Quiñones has captured on hidden cameras the public’s response to a variety of situations as the creator and host of the ABC television show “What Would You Do?” Time and again, Quiñones said, those who step in to aid others are often people who have been the targets of racism or discrimination or religious bigotry or bullying themselves.

“They sound the alarm because they know how painful it can be,” he said.

Quiñones opened the two-day Diversity Forum as keynote speaker. Held at Union South, it is the signature event of the Division of Diversity, Equity & Educational Achievement. Now in its 20th year, the event continues to grow in popularity. Registrations this year topped 1,300, the largest to date.

In opening remarks, Chancellor Rebecca Blank said she hoped attendees would gain new ideas, new connections and a new sense for the role they can play in making UW–Madison a more diverse and inclusive place.

“This event allows us to mark the progress we have made and also acknowledge how far we still have to go to make this campus a place that feels welcoming for all people,” she said.

Noting that hate crimes are on the rise, Quiñones encouraged audience members to be active bystanders, not silent observers, when witnessing injustice. He recounted his own difficult rise from deep poverty to television prominence to illuminate some of the barriers and stereotypes that can hold people back.

“The question is, what do you do with that opportunity to right a wrong? Do you sound an alarm and lend a helping hand, or do you just mind your own business and walk away?”

“I feel I was kind of born to do this kind of (television) show because of where I grew up and the world I faced and the hurdles that I had to overcome,” he said. 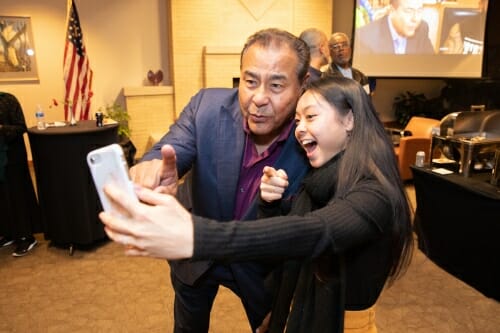 John Quiñones poses for a selifie with Alyssa Hui, a UW–Madison student, at a reception on Monday night for the award-winning journalist. Photo by Amadou Kromah

Raised in Texas as a fifth-generation San Antonian, Quiñones said he took pride in his Hispanic heritage but soon learned it brought perils outside his neighborhood.

“The coach at our school had a big old wooden paddle with holes drilled in it for extra power and speed. They would give us three spankings on our rear ends if they caught us speaking Spanish.”

When Quiñones turned 13, his father was laid off from his job as a school janitor. The family piled into trucks with strangers and journeyed 1,700 miles to pick cherries in Michigan and tomatoes in Ohio.

“I knew I did not want to do that kind of back-breaking work the rest of my life, but very few people believed in me,” Quiñones said.

When he asked adults at his high school how to prepare for the ACT or enroll in advanced placement classes, they discouraged him. 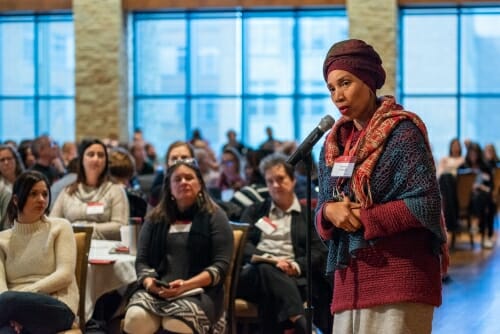 A woman asks a question at the Diversity Forum. Photo by Ingrid Laas

“My own counselors would look at me and say, ‘It’s wonderful you have this dream to be a television reporter, but we think you should try wood shop or metal shop or auto mechanics,’” Quiñones said. “Not that there’s anything wrong with those great trades, but I wanted to go to college.”

The adults at his school were doing to him what he would later see people on hidden camera do to countless others.

“They judged me by the color of my skin and the accent in my voice,” he said.

Quiñones credits Upward Bound, a federally funded educational program, for putting him on the college track. He would later go on to earn a master’s degree from the Columbia University School of Journalism.

At his first television news reporting job in Chicago, he went undercover as an immigrant from Mexico to expose a restaurant owner exploiting undocumented workers. The report earned him his first of seven Emmy Awards. He learned, he said, the power of journalism to right wrongs.

“When journalism is done right, those are the kinds of story we should be telling,” he said.

Through his hidden-camera television work, Quiñones said he’s learned that silence is complicity. Instead of asking ourselves, “Who’s going to care?” or “Who’s going to find out?” we should be saying to ourselves, “I know, in my heart, I could be doing something.”

“And that should be all the reasoning you need to step in and do the right thing,” he said.

The second day of the Diversity Forum on Wednesday will feature nine breakout sessions covering issues such as supporting the mental health needs of graduate students, reclaiming First Nations’ truth, and creating an inclusive environment for non-apparent disabilities. A closing workshop, titled “What Will You Do? Equity in Action,” will focus on what attendees can do going forward. (Registration for Wednesday is closed due to capacity.)

An archived livestream of Tuesday’s events, including the keynote address, can be viewed here. Use the hashtag #UWDiversityForum on social media to join the conversation.