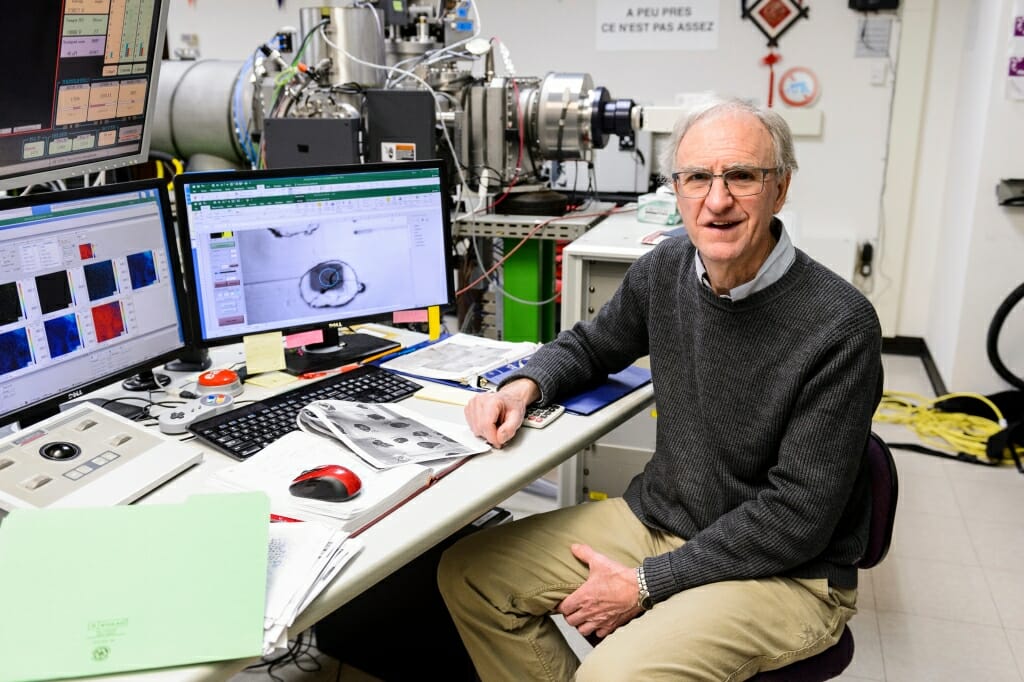 To University of Wisconsin–Madison professor of geosciences John Valley, age 71, “old” is 4 billion years plus. Plus a lot, in fact. In 1999, he and Simon Wilde at Curtin University dated the oldest earthly objects ever found: zircon crystals that formed during the Hadean epoch, about 4.4 billion years ago.

Valley, his students and collaborators have been studying them ever since.

Before the ancient zircons were discovered, Earth scientists thought the nascent planet remained a super-heated ball of gas and molten rock for up to 500 million years after Earth coalesced as a distinct body in space. 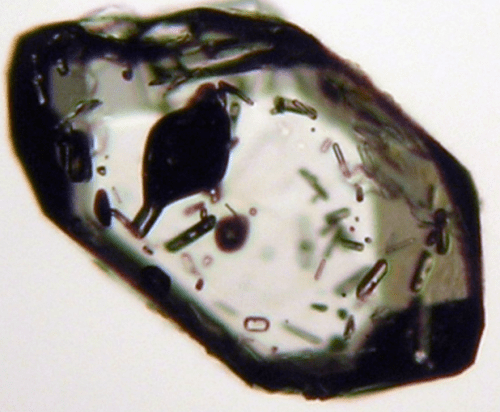 This zircon crystal is around about 70 million years old and thus transparent to visible light. The opaque blobs are melt inclusions that formed 100 to 200 million years after Earth became a planet. A new project at University of Wisconsin–Madison aims to analyze the melt inclusions to pin down the chemistry of the earliest rocks on Earth. Photo by Aaron Cavosie, Curtin University

But Valley used evidence from these tenacious zircons to show that the hellish, superheated Hadean epoch probably ended much earlier, about 100 million years after Earth’s formation.

Rather than spending half a billion years as a featureless, red-hot object, Earth had a rocky crust by 4.4 billion years ago.  It was so cool that steam condensed into liquid water – a precondition for oceans and all known life.

By subjecting crystals smaller than a pinhead to unusually precise analysis, Valley rewrote the geology textbooks – and perhaps the biology books as well.

Now Valley has embarked on a significant follow-up: learning whether the molten rock where the zircons formed were granitic, and therefore from the crust of continents, or basaltic, typical of ocean floor. Answering that question would shed light on when the crust-forming process called plate tectonics began operating.

This new project will be supported by a grant from the European Research Council, called “Monitoring Earth Evolution through Time.”

Valley is the only American among three principal investigators on the six-year, 12.8 million euro grant. “We want to look at everything from the earliest samples, 4.4 billion years ago, until the modern era, and use similar approaches and technologies to finally paint a complete picture of our planet’s structural evolution,” he says.

“A lot of people study the last 2.5 billion years, but we will emphasize the first 2 billion,” Valley adds. “This is the earliest, most exciting era, mainly because there are no known rocks.”

Alexander Sobolev, of the University of Grenoble, Alps, in France, and Stephan Sobolev of the German Research Centre for Geosciences in Potsdam, Germany, are co-investigators on MEET.

The European award was premised on Valley’s pioneering work with zircons, which provide the best direct evidence on conditions during the first half billion years of Earth’s existence.

Old evidence of a young planet

Zircons, crystals containing the element zirconium, form at high temperature, and are chemically quite stable.  Valley’s 2001 publications on zircons revealed ratios of oxygen isotopes that signaled surface temperatures below the boiling point of water.

That finding contradicted the conventional wisdom by showing that liquid water was likely present 4.3 billion years ago.

This low temperature also implied that Earth’s crust had already skinned over the interior, which remains roasting hot to this day. “The date for the first crust is in the category of, ‘When did life form?’” Valley says. “Everybody would like to know the answer.”

That research was all about zircons, but the European grant supports a major refinement – studies of “melt inclusions” – glass inside zircons that formed from remnants of the magma (molten rock) in which the zircon crystals formed.

Zircons are about 100 microns, or millionths of a meter, in diameter, nearly the same as a human hair. That was small enough to cause analytical headaches from the beginning, but the melt inclusions are truly Lilliputian in comparison, measuring 1 to 15 microns in diameter and weighing nanograms (billionths of a gram).

“This has never  been done before, largely because the inclusions are so small,” Valley says.

“If we can analyze melt inclusions, that will provide the first data on rock chemistry for the Earth’s ‘Dark Ages,’ the first 500 million years of earth history,” Valley says. “This is a critical time that we know almost nothing about.”

If anyone can pull off that ultraprecise task, it’s Valley and his co-workers at UW’s WiscSIMS lab. For more than two decades, Valley has been inventing his way toward a more precise view of zircons – techniques that he’s refining to focus on the inclusions.

The lab’s key tool, called an ion microprobe, shoots charged atoms at high speed at a tiny sample. Then a mass spectrometer “weighs” the sample atoms knocked loose to determine their mass.

Since Valley started analyzing samples with an ion microprobe in 1990, however, the instruments have vastly improved. “The precision and accuracy are 10 times better,” he says. “The sample spots are 10 times smaller, and the measurement is 10 times faster. It’s been like football, where you work hard and get a yard here and a yard there, but it all adds up.” 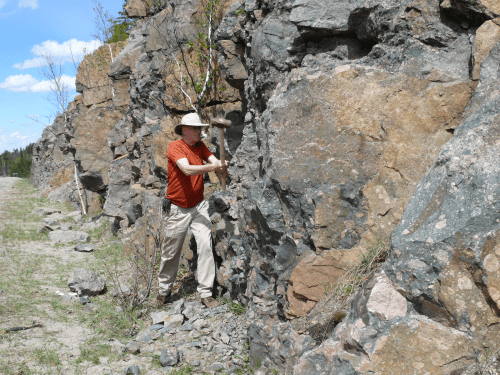 John Valley hard at work extracting a rock sample from an outcrop in Canada. “John never met a problem he could not solve with a sledgehammer and a mass spectrometer,” says his former Ph.D. student, Aaron Cavosie. Photo by Aaron Cavosie, Curtin University

By probing the melt inclusions, Valley aims to determine what type of magma the zircons formed in, and whether continent-shifting plate tectonics was operative in the Hadean epoch. Once called “continental drift,” this fundamental geologic process causes ocean crust to slide beneath continental crust, resulting in volcanoes and earthquakes.

“If we find evidence of basaltic crust in the melt, like we see on the ocean floor, that could form without plate tectonics,” he says. “But if it’s granite, as is found on the continents, that usually requires plate tectonics.”

With the kind of the luck, ingenuity and dogged persistence that have marked Valley’s career, the results should reveal whether tectonism operated during the Hadean. Tectonic movement brings heat the surface, for release to space, Valley points out. “If tectonism was not operating, Earth must have had some completely different way to ‘let off steam.’”

That may be a staggering burden of proof for a few nanograms of matter, but Valley stresses that melt inclusions have been preserved for billions of years by the encapsulating zircon. The inclusions are comparable to insects preserved in amber: time capsules from a vanished world that are waiting for science to decipher their message.

Rolling with rocks from the start

Valley grew up in Boston, where his father was a professor of physics at MIT. At age three, during the height of the Cold War, the family bought a summer place in Maine as a refuge from a possible atomic attack on Boston. “One thing my father found interesting was to go look at rock deposits with giant crystals, some the size of a boxcar, called pegmatites,” he says.

“That’s when I started collecting rocks, and I haven’t quit,” Valley adds.

Though Valley comes across as modest, fact-driven and unflappable, Aaron Cavosie, who earned a Ph.D. studying zircons with Valley in 2005, says he’s a force to be reckoned with. “His memory is razor sharp. John seemed to remember every detail he ever learned, and so if you were supposed to know it, you better darn well get organized before talking with him.”

Cavosie is now a senior research fellow at Curtin University in Australia.

Cavosie remembers Valley’s passion for field work. “I’ve stayed with John on dirty sheep stations in the Australian outback, at bunk houses in Davos, and fancy hotels in China,” Cavosie says. “He’s at home no matter where he stands, and has endless zeal for questioning the natural world around him, a zeal which he continually infused in his students and colleagues.”