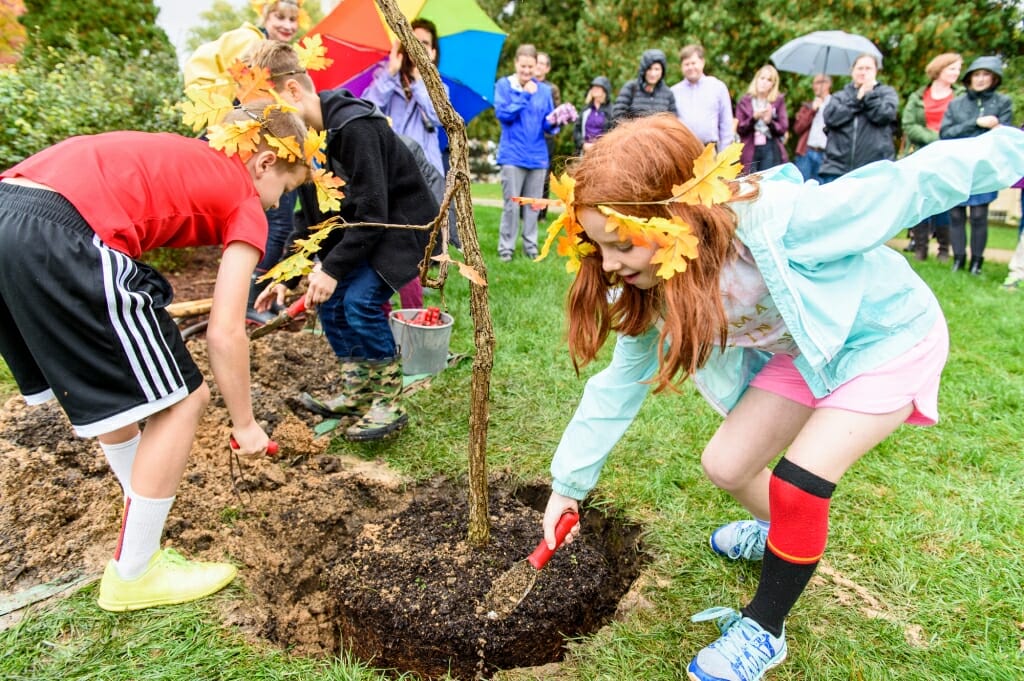 The skies were gray.

The ground was soggy.

“It’s perfect for a tree,” said Bruce Allison, an adjunct professor of forestry and wildlife ecology, and the man who wrote the book on trees – or rather several books, including “If Trees Could Talk.” 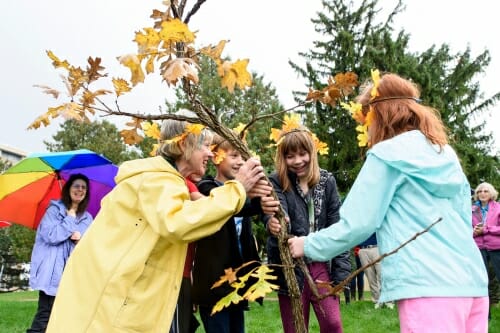 On Wednesday morning, a graft from the long-standing, much-beloved President’s Oak was planted near Washburn Observatory during a ceremony celebrating both the future and the past.

This new/old tree has deep roots. The original President’s Oak was more than 300 years old but alas, drought, harsh winters and the inevitable aging process took their toll. The tree was taken down Jan. 14, 2015.

Back in 2013, Michael Yanny could tell the end was near. The UW alumnus and owner of JN Plant Selections was on a tour of campus and saw the ailing tree. He took a small branch from it and set to work grafting it with another bur oak. 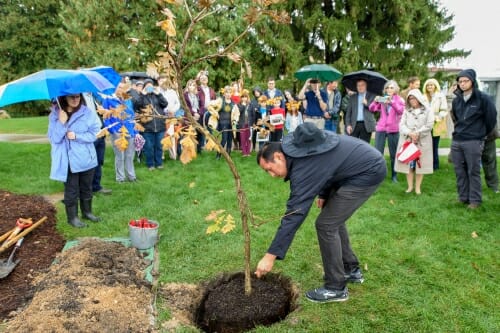 It’s the kind of thing anyone who had their first wheelbarrow at age 3 and first garden in second grade would do.

“I can’t remember when I wasn’t interested in plants,” Yanny said.

The President’s Oak got its name from a nearby building that originally housed several university presidents, which is now occupied by the La Follette School of Public Affairs.

It was born about three centuries ago, at least 100 years before the university, into the open oak savanna emblematic of Wisconsin’s pre-settlement landscape.

“The original President’s oak was a witness to dramatic changes in our cultural landscape,” said Daniel Einstein, UW-Madison historic and cultural resources manager. “During its 300-year lifespan, the landscape surrounding the tree transitioned from an area of Ho-Chunk settlements, to an experimental farm, and finally the modern campus.” 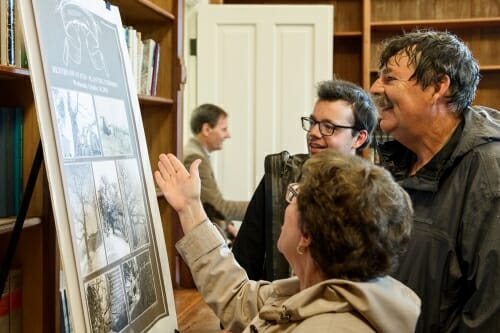 Chancellor Rebecca Blank remarked on the beauty of campus and how the most recent Campus Master Plan includes a landscape master plan for the first time, demonstrating the university’s commitment to open spaces.

“As we plant this new tree, I would love to think of it as a symbol of both the past history of this university and all the people who passed under it but also as a symbol of the future and the connection between our past and our future as we plant both an old tree and a new tree at the same time,” Blank said.

Aaron Bird Bear, an assistant dean at the School of Education, made a tobacco offering as part of the planting ceremony. Before he sprinkled the offering around the base of the tree, he encouraged those assembled to imagine a time when council fires from Native villages would have ringed the lake in front of them.

Former students from the nearby UW Child Development Lab at the School of Human Ecology attended the ceremony. They used to visit the tree regularly, seeing how it changed with the seasons. It was a tradition among generations of preschool kids. Sometimes they found tufts of fur or colorful leaves. Once, they even found a raccoon skull.

Yeah, that was cool.

One day they came for a visit and saw yellow caution tape wrapped around the tree.

“We didn’t even know it was sick or anything,” said Carson McMillan, 8.

“They were devastated,” said Kristen Krystofiak, a senior instructional specialist and 4K teacher at the Child Development Lab.

It was a hard life lesson. Krystofiak helped them deal with the loss and asked the children to draw what they loved most about the tree. They created an online tribute showing the drawings:

“I’ll miss her a lot of times,” one student wrote. “I love her branches.” 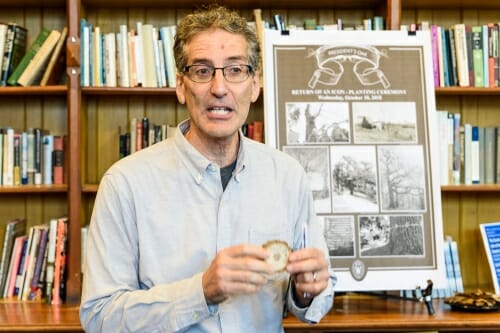 “Bur oak makes food for woodpeckers,” said another. “I am sorry you are sick.”

When they found out their old friend was making a comeback, several former students came back with good wishes — and adorned with leafy crowns.

Graham Ash, her eight-year-old brother, couldn’t help but think of all the creatures, both big and small, who called the President’s Oak home.

“Maybe this will be a new home now,” Graham said, looking at the new tree.

“At least we have this tree now,” Kellyn Ash said.

They all got to help with the planting, not afraid to get their small hands dirty.

“I hope other kids enjoy playing by it because I did,” Carson said.

“I got to be friends with it,” said Caroline Soukup, 8.

The last time they saw the original President’s Oak, they tearfully sang “Say Goodbye” to the tune of “Let it Go” from the movie “Frozen.” This time around, they sang “Happy Birthday.”

“They were connected to this tree and learned what trees give us,” Krystofiak said. “What a great environmental message and connection.”

Yanny has planted thousands of trees. He usually doesn’t have an audience. He got a little choked up when he saw the kids sharing their good wishes with the tree.

“Kids need to be out there playing in nature,” Yanny said. “They need to feel connected, now more than ever.”

Yanny refuses to take all the credit for this new/old tree, instead paying homage with a poem to the original tree planter – a squirrel, most likely.

“They make a living the same way I do,” Yanny said. “I think we should all become more squirrel-like.” 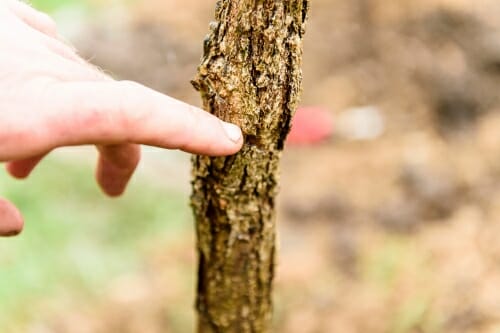 Michael Yanny, horticulturist, points to where he grafted a cutting from the original President’s Oak to another bur oak tree. Photo: Bryce Richter