Podestá to step down as International Division vice provost and dean; Gerhart to serve in interim role

Guido Podestá has announced he will step down as vice provost and dean of the International Division at the end of 2022. He will work with the division through the end of the current fiscal year to assist with the transition. Podestá has served in the position for 10 years. 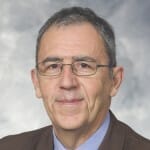 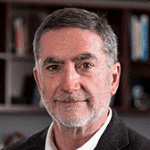 The university will conduct a national search for Podestá’s successor. Barry Gerhart, Bruce R. Ellig Distinguished Chair and professor of Management and Human Resources in the Wisconsin School of Business, will serve as interim vice provost and dean, effective Jan. 1, 2023, until the new dean begins.

“I am proud of what we have accomplished together over the last decade,” Podestá said in his announcement to International Division staff and affiliates. “I credit the division’s incredible staff with the ways we have been able to expand programming and engagement, navigate world issues and crises, and build UW–Madison’s reputation as a globally respected institution. I have no doubt that you will all continue the important work of internationalizing the institution and creating new opportunities for current and future generations.”

“Dean Podestá is a wonderful colleague,” says interim Chancellor Karl Scholz. “Under his guidance, the International Division has advanced UW–Madison as a preeminent global institution, supporting a wide array of outstanding area studies centers, working with schools and colleges to support a remarkable range of outstanding language instruction programs, and being a national leader among public universities in study abroad. I am extremely grateful for his dedication to the university and wish him well in his next adventures.”

Developing pillar units in the International Division, such as the Language Program Office and International Projects Office, allowed for the expansion and growth of language and cultural program offerings and for the university to better engage in capacity building projects on a global scale. Most recently, International Student Services and International Faculty and Staff Services were integrated into the division.

Podestá oversaw the launch of the King-Morgridge Scholars Program, an initiative funded through a $38.5 million gift from the King and Morgridge families. The program provides scholarships for young leaders from Africa, Latin America, South and Southeast Asia and the Caribbean who are committed to applying their talents toward the alleviation of poverty.

Study abroad and international internships flourished during Podestá’s tenure. The university was ranked No. 4 for study abroad among U.S. colleges and universities in the 2021 Open Doors Report. The strong trend of students abroad continued during the spring 2022 semester, with a record number of Badgers taking part in programs. Open Doors ranked UW–Madison as No. 19 for international students. The number of international students has grown steadily over the last decade, with a high of more than 6,500 students from around the world choosing UW–Madison during the 2019–2020 academic year.

Additionally, UW–Madison area studies centers secured significant funding for outreach, engagement and scholarships through federal Title VI grants, administered by the U.S. Department of Education. During the most recent four-year cycle, the university received $15,922,064. This is a significant increase from the previous award cycle, which totaled $13,598,024 and ran from 2014–2018. UW–Madison continues to be among the top universities in the number of Title VI funded national resource centers. Centers have also seen success in securing major grants through the Carnegie and Luce Foundations, among others.

The past several years have seen the university acknowledged by organizations such as the Peace Corps. The most recent rankings have listed UW–Madison as the top volunteer producing university, an honor the university has held for four consecutive years.

Podestá has also hosted numerous dignitaries and partners from across the U.S. and around the globe. Some of the most notable have included the president of Botswana, the leader of Indonesia’s FDA, and the U.S. ambassador to the United Nations. The recognition of the university as a top global university has led to more than 260 active agreements with institutions worldwide.

Prior to his time as vice provost and dean, Podestá served as associate dean in the International Division. A professor and former chair of the Department of Spanish and Portuguese, he previously directed the university’s program in Latin American, Caribbean and Iberian Studies.

Since joining UW–Madison in 1987, Podestá has received numerous awards, including a Romnes Faculty Fellowship, a resident fellowship from the Institute for Research in the Humanities and a senior fellowship from the American Council for Learned Societies.

Barry Gerhart will begin as interim vice provost and dean on Jan. 1, 2023. Gerhart is a respected leader on campus, having served as interim dean of the Wisconsin School of Business and in other leadership roles. He has a longstanding relationship with the International Division and has been a member of the Academic Planning Committee since 2018.

“I came late to international research and experiences, and it has become a wonderful part of my career,” said Gerhart. “I like and respect Guido very much, and I look forward to helping continue the great work Guido and the division do.”

Gerhart’s long list of accolades and accomplishments on the international stage includes visiting appointments in the former Czechoslovakia, UK, Denmark and Germany. His research has garnered awards from international associations, and he has frequently published in collaboration with colleagues worldwide. Gerhart has chaired doctoral committees for students from Korea, China, Taiwan, Japan and Sri Lanka. He has also hosted visiting scholars from Germany, Taiwan and Korea.

“The International Division will be in good hands under the leadership of Barry Gerhart,” said Podestá. “Barry has been an invaluable voice in the International Division for many years. He is a proven leader on campus and is well-respected across Wisconsin and abroad. I am confident that he will be in a strong position to lead the work of internationalizing UW–Madison while the search for a permanent successor is underway.”

Gerhart has several personal connections to UW–Madison as he, his wife, son and daughter are all alumni. Even outside of his professional role with the university, he has seen the way international programming impacts students.

“Our son was a Spanish and pre-med major at UW–Madison and took advantage of the study abroad program opportunity to spend a year in Madrid,” Gerhart said. “He had the experience of a lifetime. There is a lot more, of course, to the division, but that is one of the great roles it plays.”

Gerhart previously served as department chair at Cornell and Vanderbilt and as department chair, senior associate dean and interim Albert O. Nicholas Dean at UW. He earned his PhD in industrial relations from the University of Wisconsin–Madison and his BS in psychology from Bowling Green State University. His research interests include compensation, human resource management, staffing and international management.