The University of Wisconsin–Madison’s Physical Sciences Laboratory (PSL) has been awarded a $1.6 million grant, with three other universities, to expand the PSL’s technology for constructing specialized panels capable of detecting and studying neutrinos, ghostly subatomic particles.

The National Science Foundation grant will support the PSL and its partners at the University of Chicago, Yale University and Syracuse University as they build on methods developed at PSL for constructing the large detector panels. Additional organizational work and prototyping will prepare the grant partners to construct 150 panels for a massive neutrino detector that will be installed a mile underneath the Sanford Underground Research Facility in South Dakota in the mid-2020s. 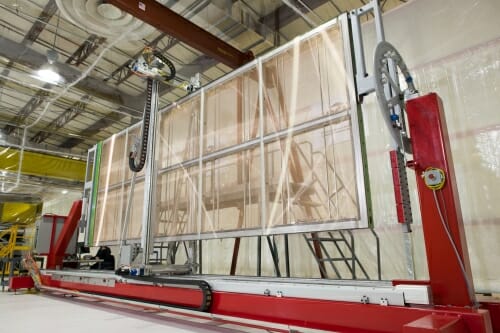 The experiment is known as the Deep Underground Neutrino Experiment, or DUNE, and will use 70,000 tons of liquid argon to study neutrinos, which are formed by energetic objects like stars and black holes and rarely interact with other matter. DUNE is supported by the Department of Energy and housed at the Fermilab national laboratory. Of the $1.6 million grant, $720,000 is slated for UW–Madison.

At more than 20 feet long by six feet wide, and wrapped in nearly 15 miles of thin copper wire, each panel takes about two months to construct. Over the past few years, PSL has developed robotic technology to precisely thread the four distinct layers of wire that spread across each of the panels, which are known as anode plane assemblies, or APAs for short. Six APAs are now part of prototype detectors being constructed and tested at CERN in Switzerland.

“We’re working together with our partners to supply them with this robot technology and all of the design work that was developed to build these anode plane assemblies here at the PSL,” says Bob Paulos, the director of the PSL.

While full-scale construction of panels is not likely to begin until 2021, the current grant lays the groundwork for the assembly project by supporting both the transfer of technology and the development of plans for future construction. The scale of the project — the final detector will stand four stories tall, across a footprint the size of a soccer field — requires that several institutions collaborate.

“The plan is to essentially have factories at universities to build these anode plane assembles,” says Paulos. “People in universities aren’t used to thinking in a factory mentality, but we need to in order to keep our costs down and keep production on schedule.”

The final construction of the 300 APAs needed, 150 built by American partners and 150 by the U.K.’s Daresbury Laboratory, will be approved under a later grant proposal.

The PSL is no stranger to catching the notoriously slippery neutrinos. They developed and built the thousands of light detectors buried deep in the Antarctic ice that comprise IceCube, the world’s largest neutrino detector. IceCube is headquartered at UW–Madison and also supported by the NSF.